PASADENA, Calif. — NASA’s Curiosity rover is revealing a great deal about Mars, from long-ago processes in its interior to the current interaction between the Martian surface and atmosphere.

Examination of loose rocks, sand and dust has provided new understanding of the local and global processes on Mars. Analysis of observations and measurements by the rover’s science instruments during the first four months after the August 2012 landing are detailed in five reports in the Sept. 27 edition of the journal Science.

A key finding is that water molecules are bound to fine-grained soil particles, accounting for about 2 percent of the particles’ weight at Gale Crater where Curiosity landed. This result has global implications, because these materials are likely distributed around the Red Planet.

Curiosity also has completed the first comprehensive mineralogical analysis on another planet using a standard laboratory method for identifying minerals on Earth. The findings about both crystalline and non-crystalline components in soil provide clues to the planet’s volcanic history.

Information about the evolution of the Martian crust and deeper regions within the planet comes from Curiosity’s mineralogical analysis of a football-size igneous rock called “Jake M.” Igneous rocks form by cooling molten material that originated well beneath the crust. The chemical compositions of the rocks can be used to infer the thermal, pressure and chemical conditions under which they crystallized.

“No other Martian rock is so similar to terrestrial igneous rocks,” said Edward Stolper of the California Institute of Technology, lead author of a report about this analysis. “This is surprising because previously studied igneous rocks from Mars differ substantially from terrestrial rocks and from Jake M.” 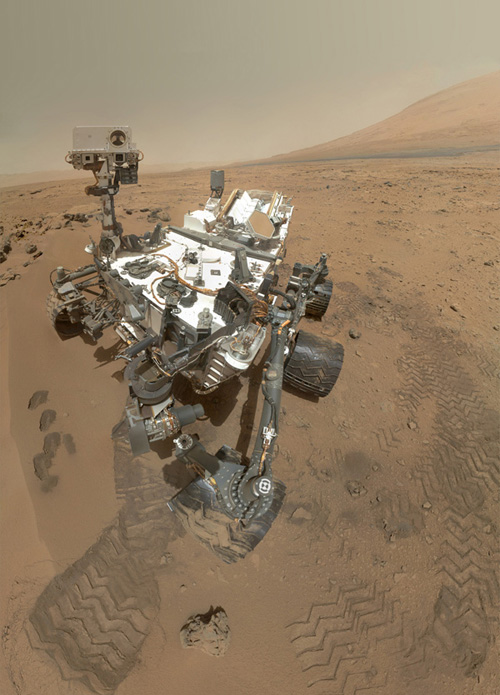 The other four reports include analysis of the composition and formation process of a windblown drift of sand and dust, by David Blake of NASA’s Ames Research Center at Moffett Field, Calif., and co-authors.

Curiosity examined this drift, called Rocknest, with five instruments, preforming an onboard laboratory analysis of samples scooped up from the Martian surface. The drift has a complex history and includes sand particles with local origins, as well as finer particles that sample windblown Martian dust distributed regionally or even globally.

The rover is equipped with a laser instrument to determine material compositions from some distance away. This instrument found that the fine-particle component in the Rocknest drift matches the composition of windblown dust and contains water molecules. The rover tested 139 soil targets at Rocknest and elsewhere during the mission’s first three months and detected hydrogen — which scientists interpret as water — every time the laser hit fine-particle material.

“The fine-grain component of the soil has a similar composition to the dust distributed all around Mars, and now we know more about its hydration and composition than ever before,” said Pierre-Yves Meslin of the Institut de Recherche en Astrophysique et Planétologie in Toulouse, France, lead author of a report about the laser instrument results.

A laboratory inside Curiosity used X-rays to determine the composition of Rocknest samples. This technique, discovered in 1912, is a laboratory standard for mineral identification on Earth. The equipment was miniaturized to fit on the spacecraft that carried Curiosity to Mars, and this has yielded spinoff benefits for similar portable devices used on Earth. David Bish of Indiana University in Bloomington co-authored a report about how this technique was used and its results at Rocknest.

X-ray analysis not only identified 10 distinct minerals, but also found an unexpectedly large portion of the Rocknest composition is amorphous ingredients, rather than crystalline minerals. Amorphous materials, similar to glassy substances, are a component of some volcanic deposits on Earth.

Another laboratory instrument identified chemicals and isotopes in gases released by heating the Rocknest soil in a tiny oven. Isotopes are variants of the same element with different atomic weights. These tests found water makes up about 2 percent of the soil, and the water molecules are bound to the amorphous materials in the soil.

“The ratio of hydrogen isotopes in water released from baked samples of Rocknest soil indicates the water molecules attached to soil particles come from interaction with the modern atmosphere,” said Laurie Leshin of Rensselaer Polytechnic Institute in Troy, N.Y., lead author of a report about analysis with the baking instrument.

Baking and analyzing the Rocknest sample also revealed a compound with chlorine and oxygen, likely chlorate or perchlorate, which previously was known to exist on Mars only at one high-latitude site. This finding at Curiosity’s equatorial site suggests more global distribution.

Data obtained from Curiosity since the first four months of the rover’s mission on Mars are still being analyzed. NASA’s Jet Propulsion Laboratory, a division of Caltech in Pasadena, Calif., manages the mission for NASA’s Science Mission Directorate in Washington. The mission draws upon international collaboration, including key instrument contributions from Canada, Spain, Russia and France.