Mole Crowdsourcing: There could be an App for That

Have you ever had a strange mole on your body and wondered if it was skin cancer? The best move is to schedule an appointment with a dermatologist, but many wait without realizing they could be dealing with melanoma.

Researchers at two universities – the University of Utah and Texas Tech University – have recently identified a new technique for handling this problem: Ask a crowd.

For their study, researchers showed 500 adult participants high-resolution images of 40 moles (nine of which were clinically-diagnosed melanomas) and asked individuals to circle those they found suspicious.

“Individuals are bad at finding cancerous moles,” said University of Utah communication assistant professor, Jakob Jensen, senior author of the study published in the December (2013) issue of Cancer Epidemiology. “Our research shows that groups of people – when looked at as a group – are very good at this task. We call this process collective effort.”

Collective effort can be effective even when a single person has low reliability at a task, as the pattern of the group overcomes the limitations of each individual. Collective effort does not utilize group decision making as respondents independently perform each task. 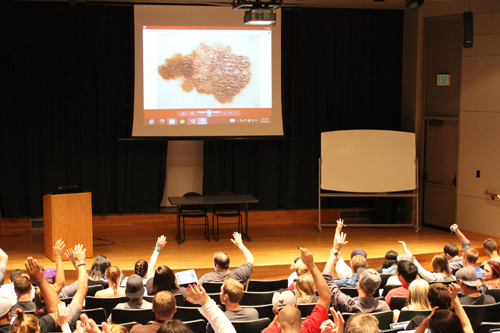 Study participants looking at images of moles to determine if they look suspicious or not. Photo Credit: Jakob Jensen

Jensen and colleagues refer to their collective effort approach as “mole crowdsourcing.” Crowdsourcing is a popular term that refers to using crowds of people, often recruited online, to accomplish tasks.

“Mole crowdsourcing could be implemented via modern communication technology,” added Jensen. “For instance, our research team is already working on a cell phone application that will allow people to take a photo of a mole and have that image evaluated by hundreds, if not thousands, of other users.”

Mole crowdsourcing would not replace the importance of clinical skin examinations; rather, it would provide an evidence-based strategy for funneling high-risk patients toward those resources.

In the U.S., melanoma has been steadily increasing over the last 30 years. The five-year survival rate for late-stage melanoma is only 15 percent with approximately one person dying of this illness every 61 minutes in the United States. Five-year survival rates for melanoma improve dramatically if the cancer is caught before it advances to a late stage. Thus, finding suspicious moles early and motivating individuals to act is essential. 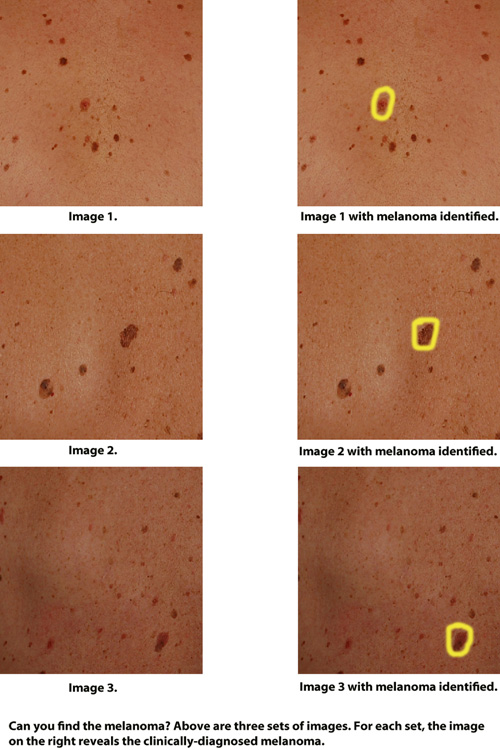