A scalyhead sculpin is a small, rather drab, nondescript fish.

But “stripped” to its skeleton and stained, it suddenly becomes a striking specimen in vivid blues and crimson.

Striking enough to be among the 14 photos by Adam Summers, University of Washington professor of biology, in his “Cleared: The Art of Science” on display now through spring 2014 at the Seattle Aquarium.

Summers and his team at the UW’s Friday Harbor Laboratories are interested in understanding the mechanics of movement, feeding and other animal functions while on the lookout for opportunities to copy or imitate nature, a field called biomimicry.

Staining and imaging specimens to better understand their bones, cartilage and other underlying structures is one part of such research. His lab has hundreds of species treated in this way.

A butterfly ray depicted in the exhibition was stained while trying to understand how a ray’s skeleton determines the flapping movements of its wings, work that was published in the Journal of Morphology in 2005. 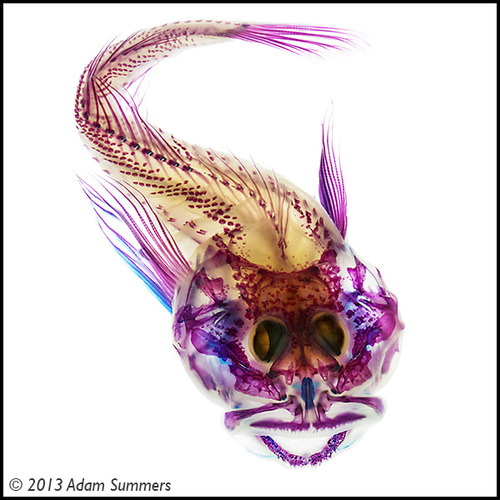 This scalyhead sculpin was the first fish Adam Summers posed for artistic effect rather than for strictly scientific purposes. Image credit: A Summers/U of Washington

Also part of the exhibition is an image from a manta ray stained to reveal the parts of its mouth involved in filter feeding. It helped UW researchers develop ways to identify manta and devil ray species being slaughtered for Asian apothecary shops. That research, funded by the National Science Foundation and National Geographic, was published earlier this year with Summer’s image of the manta ray skeleton on the front cover.

“These images often end up on the covers of journals, so I knew they were good looking, but I did not think of them as art,” Summers said. “A good friend encouraged me to explore that art angle and worked with me to do things I’d never do for scientific imaging, for example tilting the specimen or showing only part of the animal.”

The specimens were either collected as part of the lab’s scientific work or are bycatch from fishery operations.

During staining, blue dye is taken up by cartilage and crimson dye is taken up by mineralized tissue such as bone. The specimen is bleached and treated so that all that’s left is the skeleton and the connective tissue and skin held together by collagen. The connective tissue and skin become see-through when the specimen is fully submerged in glycerin. Summers has posted a set of the photos on his site “Picturing Science.” 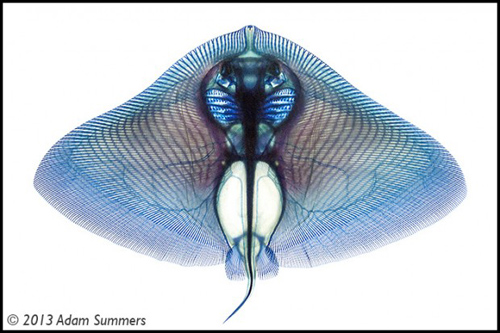 For the aquarium exhibition, the images are paired with poems composed by Sierra Nelson, a Seattle poet.

“I took Sierra’s poetry-focused course a year ago and we were both struck by the similarity in approach of poets and biologists,” Summers said. “This interaction led to the realization that a poet’s interpretation of the images in an artistic setting would create an unusual conversation with the science.”