*Some of the brightest young technologists in the nation visited San Francisco on Wednesday to share their ideas with venture capitalists, academics and media.*

SAN FRANCISCO – June 23, 2011 – A collection of students who want to change the world with technology pitched their ideas to Silicon Valley industry experts, academics, and media on Wednesday.

Several teams of students who will participate in the July Imagine Cup 2011 Worldwide Finals in New York City got to first showcase their projects to people who could help them refine their concepts, find markets for their ideas, and eventually find investors to provide the money they will need to turn their ideas turn into viable businesses.

The projects on display on Wednesday included a smart phone camera and app that can detect malaria, a device that helps low-vision and legally blind students take notes in the classroom, and games that educate mothers about the health of their unborn children and help children manage their asthma.

On the ninth floor of San Francisco’s Hotel Palomar, the students, panelists, media, and Microsoft employees mingled before getting down to the business of seeing a demonstration from each group. 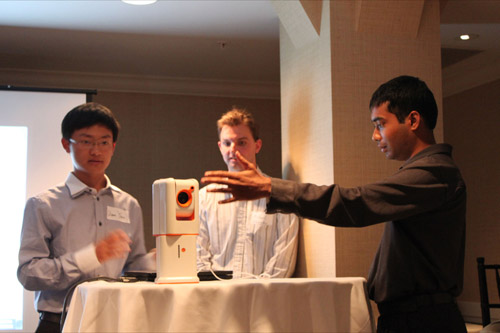 “A challenge is a dragon with a gift in its mouth,” began Team Dragon’s presentation, quoting the author Noela Evans. The team created a video game for Windows Phone to help children with asthma become “collaborators in managing their health.”

The smart phone game features children playing as a fire-breathing dragon and incorporates a digital spirometer, a health instrument used to measure lung capacity. Children with asthma are supposed to use a spirometer twice daily to measure their lung functions – the data can sometimes predict asthma attacks before they happen – but only half of the children with asthma monitor this way.

By blowing into the digital spirometer, children not only power Azmo the Dragon in the game, but record their lung capacity regularly over time so it can be monitored by parents and doctors. 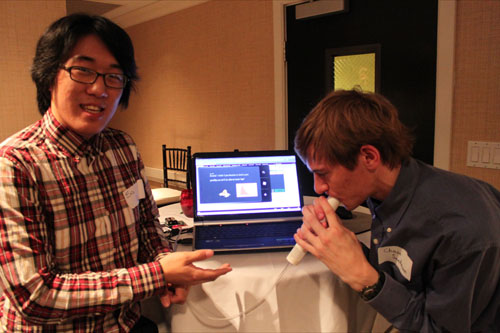 Azmo the Dragon. Jungwoo Lee explains how his team’s Windows Phone game Azmo the Dragon helps children manage their asthma while teammate Chase Sandmann blows into a digital spirometer to measure his lung capacity. In the game, children control a fire-breathing dragon in part by using the spirometer, which helps parents and doctors monitor lung capacity. Image credit: Microsoft

Monitoring lung capacity using the game “can turn a 2 a.m. emergency into a 10 a.m. urgency,” said Chase Sandmann, one of the Rice University students on Team Dragon.

Microsoft also organized Wednesday evening’s meet-up to allow the students one final chance to share their ideas before they head off to the Imagine Cup worldwide finals.

Radha Basu, a leading woman entrepreneur in technology and professor at Santa Clara University, was one of the experts on hand to provide feedback for the students.

Basu said she expected to hear a lot of ideas, and to see innovation, but what she didn’t expect was to see so many applications of technology for the developing world and society.

“And many of them didn’t just stop with the innovation, they have actually thought through how they’d distribute and productize. That is the next stage of entrepreneurship,” Basu said. “And of course when you start to productize and market, that’s when the funding has to come, including venture capital. I think this is the early stage, but I was excited to see that they’d thought about it.” 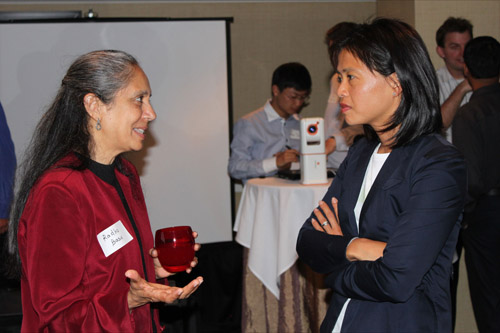 Microsoft has a series of programs – including Dream Spark, Imagine Cup, and BizSpark – designed to help nurture young technologists as they navigate the path from school to career, and ultimately to help them fly from idea to entrepreneurship.

Dan’l Lewin, Microsoft’s corporate vice president of Strategic and Emerging Business, said he has had the privilege of seeing many young people become successful entrepreneurs. And Microsoft can help, he said.

“The history of the company is based upon both our products and technologies and our tools, and what others can do with them. The fact of the matter is, as many smart and creative people we employ at Microsoft, there are more smart and creative people who don’t work for us,” Lewin said. “It’s inherent to our long-term success to engage and enable this community, and to create approachable programs, to encourage them to create new products, tools and technologies that will benefit communities.” 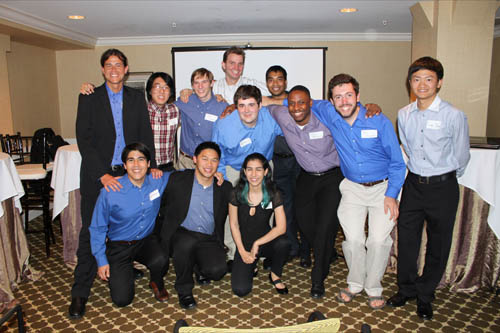 “Learning how to use the tools, that’s a baseline,” he said. “Be confident with the technology – technology is an enabler.”

It’s also wise to reduce risk, and participating in competitions such as Imagine Cup – one of the world’s premier student technology competitions – gives students a chance to bring their ideas to life in a competitive, fun, supportive, low-risk environment, Lewin said.

Vinny Lohan and his team couldn’t agree more. Lohan, who recently graduated from the University of Auckland, is a two-time Imagine Cup participant. Last year, Lohan and his team created One Beep, an inexpensive way of sending educational information to computers in areas where there are no phone lines or Internet services. The idea has garnered widespread attention, and the team recently started pitching its project to European governments for funding.

“You have to find opportunities. It’s about putting yourself out there,” Lohan said. “With opportunities like Imagine Cup, you can go out and test yourself. You’ll get feedback. You’ll be able to do so much more. For young entrepreneurs, it’s a perfect place to get your momentum going, and a risk-free environment to test your ideas in.”

Lohan and his team are on their way to making a successful business out of their Imagine Cup idea.

“Money is not our motivator,” Lohan said. “When I say we want a successful business, I mean sustainable. I’m not saying we don’t want to make money, but money is the result, not the aim. It’s about empowering other people, there’s no question about that.”

The single best thing young technologists can do is to validate their business idea and model as early as possible, said former Imagine Cup world finalist Boon Sheng Ooi from Malaysia.

Participating in the Imagine Cup and events like the meet-up in San Francisco gives students a chance to learn business, marketing and other skills that will serve them once they graduate, but Ooi and his teammates used yet another Microsoft program to help them get their fledgling business off the ground – BizSpark.

BizSpark helps startups across the globe by providing them with access to Microsoft software development tools, marketing, and connecting them with key industry experts and investors. After competing in the Imagine Cup twice, including one trip to the worldwide finals in 2007, Ooi and his team decided to start a business together.

Forming Their Own Businesses

“Imagine Cup is just a first step. Students should use what they have learned during the process to go farther,” Ooi said. “BizSpark helped us add a lot more value, and brought additional marketing resources for our budding company.”

As the Xilnex team is in its final year of the three-year BizSpark program, the company is starting to pick up customers outside of Malaysia in Singapore and Australia.

“The key thing is that we learned how to create a product that appeals to different situations, and figured out how we can use technology to solve real life issues,” Ooi said. “It took us six months garage-style just to come out with a prototype that has real market value with the same core technology we used for our Imagine Cup project, and many more months for the first real customer.”

Lewin echoed this “it’s a journey” sentiment – success doesn’t come overnight. He said working in the Silicon Valley, the epicenter of technology startups, has given him valuable perspective. Not every company will attract venture capital financing and become a household name, but many of them can make a significant difference in their local community and economy.

Meanwhile, he continues to be inspired by the young entrepreneurs he encounters through Microsoft’s Dream Spark, Imagine Cup and BizSpark programs, including a team of women in Turkey who are using technology to help infertile couples and doctors more easily monitor in-vitro fertilizations and former Imagine Cup winners from France who just received millions to finance their social gaming network, and a team from Russia that developed a resources management system for emergencies that was used after the recent earthquake and tsunami in Japan.

“I love this stuff. I love being around the energy and enthusiasm of young entrepreneurs, whether it’s social gaming or using GPS technology to help monitor crop watering. There are local stories everywhere in the world,” Lewin said.

The team has won several awards including some significant prize money which it has used to fund itself, and has already started engaging possible investors for this technology including private equity firms as well as venture capital firms, said team member Cy Khormaee.

Where do they see this going in the next five years?

“Hopefully we’ll be working out there in the field using our tool to really make a difference in developing countries,” said team member Wilson To.

Added Khormaee: “Lifelens just has amazing potential to be applied to any number of diseases … not only in the third world, but in the first world.”

It has been a journey for these teams, and it will continue to be one if they choose to become social or business entrepreneurs, Lewin said. The marketplace is unforgiving, so Microsoft is trying to provide a forgiving environment for young technologists to develop their ideas and their businesses. Then, when they go back to tell the stories that business founders tell, they can talk about how they had “help wading through the underbrush to the picnic area.”

“It’s a journey. All these companies whose names you know? They’re all 10-year overnight successes,” Lewin said. “We as a company make significant investments in our future by creating programs and making space and time and creating path for these young entrepreneurs who will use our technology for the long run.”