In the spring of last year, Yale junior Liane Membis acted on a whim and found it opened up opportunities she never before considered.

That was when she made a spontaneous decision to take part in the Miss Black and Gold pageant sponsored by the Yale-based Zeta chapter of the Alpha Phi Alpha fraternity. She was completely surprised when she won the runner-up distinction of Miss Gold — as well as the title of Miss Congeniality — in the contest, which celebrates the achievements of African-American women.

Membis had never participated in a beauty pageant before then, and admits that she had a less-than-flattering view of such contests. 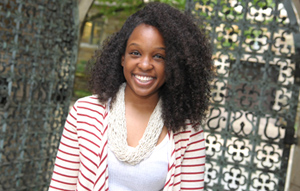 “It seemed that pageant girls were bratty and conceited,” she says. “I never saw myself as a competitor before.”

However, her experience in the Miss Black and Gold contest convinced her otherwise.

“I saw a positive side,” she says. “The contest wasn’t only about looks, and my enjoyment of the pageant wasn’t tied to winning.”

The following summer, Membis applied to represent Connecticut in the Miss Black America pageant, and learned last fall that she had been selected. She will compete in the national competition in 2012.

Membis notes that the pageant was created in the 1960s to promote black women and their beauty, and to counteract negative images of them in the media. She says one of the reasons she is interested in the contest is because of its historical significance, and she also enjoys the chance to meet the other women contestants.

“I really like interacting with different people and meeting motivated women who come from all walks of life. The social interaction is one of the most interesting aspects of pageantry for me,” she says.

Open to contestants between the ages of 20 and 27, the Miss Black America pageant will include an opportunity for Membis to show off a talent and to take part in a question-and-answer session about an issue of importance to her. A member of both the cheerleading team and the marching band at her former high school in Atlanta, Georgia, she is considering performing a contemporary dance as her talent.

“I like to perform, and, once on stage, I lose my nerves,” says Membis, who notes that, if crowned, she would also use the recognition to draw national attention to two issues that she is particularly passionate about: the importance of literacy in the African-American community and improving educational opportunities for individuals with disabilities.

Some of her personal passions include journalism and public service. A former reporter for the Yale Daily News, Membis has been a freelance writer for CNN and has also penned articles for Ebony magazine. Last summer, she was an intern at CNN in Atlanta, a post she will also hold this summer.

“I’ve had the opportunity to write national stories for CNN, which has been very exciting,” says Membis, who was awarded Glamour magazine’s Ruth Whitney Scholarship through the New York Women in Communications Foundation. Among her pieces for CNN was an article on corporal punishment and a story and accompanying video that explored whether the church influences the relationship status of African-American women. On a lighter side, she also wrote a piece on Paul the Octopus, which became famous for “predicting” — through its feeding behavior — the winners of World Cup soccer matches.

“It’s been my dream to work for CNN,” says Membis, who is majoring in English and in ethnicity, race and migration.

A volunteer tutor in the Hillhouse High School Internship Program, Membis is also the education network membership coordinator for Dwight Hall, where she oversees more than 30 education-related groups. She is the co-president of the Black Women’s Coalition, a group formed for discussion of issues pertaining to black women, and is a member of the Black Student Alliance and the Pi Alpha Chapter of Delta Sigma Theta Sorority Inc., whose members engage in a variety of community service projects, including volunteering at soup kitchens. She will be president of the chapter for the 2011-2012 year.

“I think the idea of service has been embedded in me since childhood. My parents are working-class immigrants from Nigeria. I am the youngest of three children. I was always helping out, doing things like cooking or helping to take care of and teaching my sister, who has been a huge inspiration for me,” says Membis, who also volunteered during high school with Special Olympics and Best Buddies.

Membis acknowledges that it was difficult to leave her sister and family when she came to Yale, but says that she recognized that she could have the most impact on her family by seeking opportunities to “better myself.”

The Yale student aspires to a career in journalism after she graduates next year, but also hopes to accomplish other goals: to teach, to run a non-profit program and to someday own a couple of her own businesses.

“I see a lot of opportunities for the future,” says Membis.

She will spend part of her summer seeking sponsors for the Miss Black America pageant and deciding which talent she will showcase during the contest.

“I’m excited about it and I have a good support system in my family and friends,” says Membis. “I just want to enjoy the time I share with the other contestants and to have a good time!”