Microsoft Employees Raise $1 Billion for Communities Around the World

“Today, I’m thrilled to announce that since our Employee Giving Campaign started in 1983, Microsoft employees have donated a total of $1 billion to more than 31,000 nonprofits around the world,” Ballmer said. “I’m incredibly proud of our employees, and this is truly a time to celebrate, not just because we’ve raised a record amount of funds, but also because together with our nonprofit partners, we have impacted and improved the lives of hundreds of millions of people.” 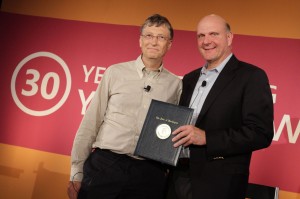 “From its earliest days, Microsoft employees have been involved in their communities and have helped contribute to their vitality and growth,” Gates said. “Thirty years and $1 billion later, that impact can be felt around the world. The company and its employees have much to be proud of at this remarkable milestone and, I know, will continue to make a positive impact in the years ahead.”

To mark the occasion, Microsoft announced a $25,000 grant to the top four organizations that have received the most funding from Microsoft employees during the span of the campaign: United Way of King County, World Vision International, Seattle Children’s Hospital Foundation and the American National Red Cross.

Each year, Microsoft matches employee volunteer time at $17 per hour and dollar-for-dollar charitable contributions to all eligible nonprofits up to $12,000 per employee. When the Microsoft giving program began in 1983, approximately 200 employees raised $17,000 for nonprofits. Today, more than 35,000 employees, or approximately 65 percent of Microsoft’s total U.S. workforce, participate, and the company predicts its employees will raise more than $100 million in 2012 for global nonprofits.

“The impact of all that giving is almost incalculable, and the statistics don’t even begin to tell the whole story,” said Jon Fine, CEO, United Way of King County. “Microsoft has created a culture of generosity that has radiated so far into the community. The standard of giving and volunteering by Microsoft employees has raised the bar and influences so many others here and around the world.” 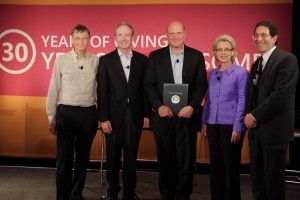 Gregoire attended the event and proclaimed October 2012 as the Microsoft 30th Employee Giving Campaign Month. “The amount of time and money contributed by Microsoft employees is beyond impressive. Given the sheer range and number of organizations that receive its support, it is no exaggeration to say that the Microsoft Employee Giving Campaign has become an indispensable program, serving Washingtonians and people around the country,” Gregoire said.

About the Microsoft Employee Giving Campaign

Microsoft’s annual Employee Giving Campaign is a year-round effort, but there’s a special focus every October on the Redmond campus and in offices around the U.S. It is an opportunity for employees to combine their energy, generosity and creativity to raise money for nonprofit organizations and causes locally, nationally and globally. Beyond the direct donation of time and money to nonprofits, an army of Microsoft employee volunteers plans and executes the monthlong campaign through activities, including a 5K run, an online auction and an “underground” car show.

“Year over year, Microsoft employees have increased their generosity of time, talent and resources, which has led to the continuous growth of the Give Campaign during the past three decades,” said Brad Smith, executive vice president and general counsel, Microsoft. “As our campaign has grown, we’ve been honored to stand alongside a long list of nonprofit partners and support their invaluable service to communities around the world.”

A Passion for Giving — Employee Stories

Elisa and Greg Graceffo, both Microsoft employees, became involved with the Juvenile Diabetes Research Foundation’s Northwest Chapter, where Elisa currently sits on the Board of Directors, soon after their oldest daughter was diagnosed with Type 1 diabetes. The chapter’s annual fundraising event is Nordstrom Beat the Bridge to Beat Diabetes, a walk-run that attracts more than 10,000 local participants and raises close to $1.5 million every year. Together, they formed a team, and during the past four years, the couple has raised more than $60,000 for diabetes research as a result of individual donations, including from Microsoft contributors and the Microsoft matching program.

Microsoft employee Alice Kupcik is on the board of directors for the Oaxaca Streetchildren Grassroots, a nonprofit organization in Oaxaca, Mexico, that supports the education of children and young adults from impoverished and indigenous families. Kupcik became involved with the organization during her first trip to Oaxaca in 2007, when she visited the facilities and learned more about the work they do in the community. On her next visit in 2009, she sponsored the education of two young women, and she joined the board of directors in 2010. Kupcik helps with fundraising initiatives and is in the process of obtaining software for the schools through Microsoft’s software donation program in Mexico.

Microsoft Total Giving by the Numbers

• Microsoft employees have donated $1 billion, inclusive of the corporate match, since 1983.

• Microsoft employees in the U.S. have volunteered more than 2 million hours of their time to causes they care about since the company began a volunteer match program in 2005.

• Since 1983, Microsoft and its employees have provided more than $6.5 billion in cash, services and software to nonprofits around the world through localized, company-sponsored giving and volunteer campaigns. This includes in-kind donations.