Student winners from across the globe, including United States and Thailand, are honored at the 10th anniversary of the Imagine Cup.

The Imagine Cup 2012 competition winners were announced tonight at the Imagine Cup World Festival and Awards Ceremony at the Sydney Convention and Exhibition Centre, in front of 106 student teams. The event was the culmination of a five-day celebration of technology, teamwork and innovation.

More than 350 students from 75 countries traveled to Sydney after competing in local and online events, representing the best and brightest selected to compete in the Imagine Cup Worldwide Finals. Cash prizes totaling approximately US$175,000 were awarded across eight competition categories.

“Over the past 10 years, Imagine Cup participants have applied technology and minds to positively impact their local communities and change the world,” said Moorthy Uppaluri, general manager, Global Academic Programs, Microsoft. “Whether it’s using the cloud to aid in disaster recovery, inventing technology to make education more accessible to erase the digital divide or making it possible to diagnose medical conditions using mobile phones, the Imagine Cup has inspired students to imagine what once was considered impossible and make it real.” 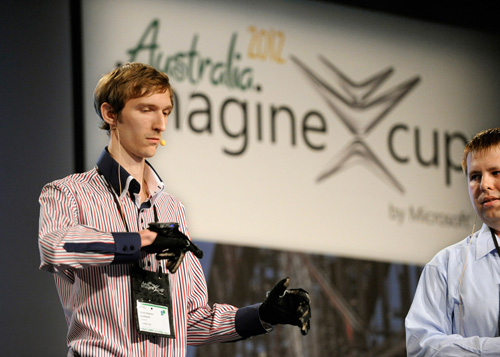 Found in Translation. Team Quadsquad from Ukraine showcases its project, Enable Talk, a software solution that transforms sign language into a form of verbal communication through sensor-equipped gloves and a mobile device. Image credit: Microsoft

Imagine Cup is more than a competition; it’s a way for young entrepreneurs, innovators and developers to have an opportunity to develop an idea, create a product, set a clear business plan and even take their product to market. All Imagine Cup 2012 Worldwide Finalist teams that competed in Sydney this year are eligible to apply for Imagine Cup Grants, a three-year, US$3 million investment by Microsoft to help students turn their ideas into reality. More information on Imagine Cup Grants can be found at https://www.imaginecup.com in the coming weeks. In addition, through the Microsoft BizSpark program, Imagine Cup participants can launch startup businesses in their communities and across the Web. More information on BizSpark can be found at https://www.microsoft.com/bizspark.

Team quadSquad from the Ukraine took top honors in the Software Design Competition with its device, Enable Talk, which uses a pair of gloves equipped with 15 flex sensors and a microcontroller that continuously recognize sign language patterns, which are then transmitted via Bluetooth to a Windows Phone device that uses the Microsoft Speech API and Bing API to translate the signs into audio. With its victory, the team won US$25,000. 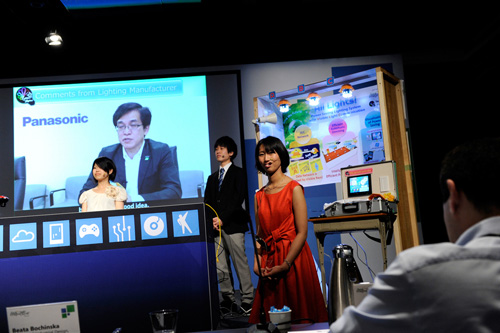 Dim the Lights, Please. Team Coccolo from Japan advanced to the final round of the Software Design competition with its project that allows users to save energy costs by automatically dimming lights in a room when there is more light than needed. Image credit: Microsoft

Team quadSquad was not the only competitor whose project was designed to enhance the quality of life for the disabled. Twenty-three percent of Imagine Cup projects this year were created to improve the lives of individuals with disabilities such as visual and hearing impairments and diseases that limit a human’s physical mobility.

In 2004, more than 275 million people globally had moderate to profound hearing impairment, 80 percent of them in low- and middle-income countries, according to the World Health Organization’s most recent data.

“We were inspired to help our friends who are hearing- and speech-impaired to have the ability to communicate like everyone else,” said Maxim Osika, Team quadSquad. “The Imagine Cup is an amazing experience; we’re thrilled to be here learning from the experts around us.” 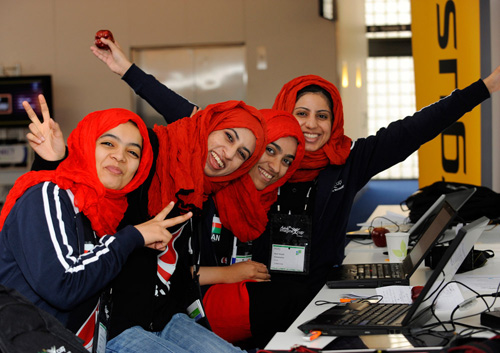 Maintaining the Supply of Life. One of three all-female teams in the Software Design category, Team Grawesome from Oman pauses in the Student Lounge to show its team spirit. The team has advanced to the next phase of the competition. Image credit: Microsoft

The following are the winners in the core Imagine Cup Competitions:

1. Software Design. Students create innovative software, service solutions and real-world applications that unleash the power of technology to benefit their community or, perhaps, the entire planet.

2. Game Design. Students select one of two tracks (Phone or Xbox/Windows) to create games that not only are fun but also help to improve the world at the same time.

In addition to the core Imagine Cup Competitions, students were able to compete in five online Challenges. These Challenges provided opportunities for students to compete for an additional US$75,000 cash, as well as other prizes. The following are the Challenge winners:

1. IT Challenge. Students are tested on their knowledge of IT systems and faced with unique scenarios to solve, competing for title of best of the best in the industry.

2. Kinect Fun Labs Challenge Sponsored by Microsoft Studios. This challenge brings the Imagine Cup into the living room by asking students to think about entertainment with a social conscience.

4. Windows Metro Style App Challenge sponsored by Microsoft Windows. With this challenge, Microsoft is inviting students to be at the forefront of creating applications for the new Windows 8 platform.

5. Windows Phone Challenge sponsored by Nokia. Students are challenged to create an XAP application that not only will help solve the world toughest problems, but also that people will love having on their Windows Phones.

The People Have Spoken: Team D Labs From India Honored at Imagine Cup

The People’s Choice Award sponsored by Bing is the only Imagine Cup award that is determined by the public, and it includes a US$10,000 prize. The D Labs created software to help dyslexic children use games to learn more effectively by using Kinect for Xbox 360. Parents can also track their children’s progress by reviewing data captured by the solution, which is stored on Windows Azure.

In addition to the above awards, Microsoft and Coca-Cola are proud to present the winners of the Health Awareness Award and Environmental Sustainability Award for two projects that tackle the world’s toughest health and environmental issues. The following winning teams will receive US$10,000:

As is tradition at the Imagine Cup Worldwide Finals, Pip Marlow, general manager of Microsoft Australia, participated in the ceremonial flag passing to mark the transition of host country duties. Nikolay Pryanishnikov, general manager of Microsoft Russia, was on hand to accept the flag on behalf of Russia, which will host the 11th annual Imagine Cup in St. Petersburg in July 2013.

Imagine Cup 2012 was made possible by support from key partners that are committed to helping students embrace the full potential of technology. These sponsors include Avanade, Bing, Bradesco, Coca-Cola Co., Microsoft Studios, Nokia Corp. and Windows.