Manganese Oxides in Treatment System Could Be Mixed Blessing

In a “bad news, good news” scenario, researchers at North Carolina State University have found that some black sludge growing in a water-treatment site could have redeeming benefits.

The black sludge coated water pump components at a superfund site in Raleigh. Generally, the presence of such material gums up the water-treatment site’s primary task of cleaning fouled water, says Owen Duckworth, an NC State associate professor of soil science and the corresponding author of a paper describing a study on the black sludge and its characteristics. Black sludge at a water-treatment site is mostly something to be avoided rather than encouraged, he said. 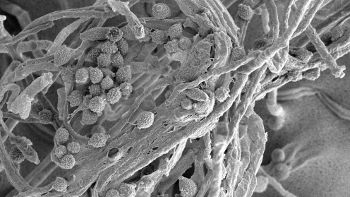 But as the researchers used powerful microscopic and X-ray techniques to closely examine the sludge, they found that it contained manganese oxides.

“Manganese oxides have low toxicity and are of technological interest because they suck up metals and cause chemical reactions that chew up organic matter,” Duckworth said. “So they’re used in things like water treatment to get micro-pollutants out of water.”

The manganese oxides at the water-treatment site are small but have large affinities for metal. They are thousands of times smaller than the width of a human hair, and shaped like dinner plates with holes in the middle.

“Metals like zinc, copper and lead, for example, will sit in the holes of the plates or stick to the edges,” Duckworth said. “And, the naturally occurring manganese oxides have more holes than those grown in a lab setting, making them even more effective in sucking up metals.”

During their testing, the researchers found that manganese was oxidized by a fungal catalyst.

“Unlike iron, which oxidizes when exposed to air, manganese needs a catalyst to oxidize,” Duckworth said. “In this case, we found evidence of a fungal catalyst.”

Moreover, the researchers found that the manganese oxides in the water-treatment plant, which appeared to grow naturally, are similar to what scientists would grow in a lab setting to test the oxides’ utility in environmental remediation.

“There is great interest in passive treatment systems in which naturally occurring components, like the manganese oxides at this water-treatment site, could serve a useful function,” Duckworth said. “In essence, we would use the fruits of this site to help clean up other sites, because we’re never going to run out of metal-contaminated sites.”

Before attempting to use fungal manganese oxides in remediation efforts, though, Duckworth says he’ll continue to track how the black sludge grows in different conditions, how it binds to different metals, and how it reacts to organic matter.

The research was supported by the National Science Foundation Environmental Chemical Sciences Program (award CHE-1407180) and the U.S. Department of Energy, Office of Science, Office of Basic Energy Sciences under contract No. DE-AC02-76SF00515. Researchers from NC State and the University of Minnesota co-authored the paper, which is published in Environmental Science: Process & Impacts.