When blessed with a resource in overwhelming abundance it’s generally a good idea to make valuable use of that resource. Lignocellulosic biomass is the most abundant organic material on Earth. For thousands of years it has been used as animal feed, and for the past two centuries has been a staple of the paper industry. This abundant resource, however, could also supply the sugars needed to produce advanced biofuels that can supplement or replace fossil fuels, providing several key technical challenges are met. One of these challenges is finding ways to more cost-effectively extract those sugars. Major steps towards achieving this breakthrough are being taken by researchers at the U.S. Department of Energy (DOE)’s Joint BioEnergy Institute (JBEI).

“Through the tools of synthetic biology, we have engineered healthy plants whose lignocellulosic biomass can more easily be broken down into simple sugars for biofuels,” says Dominique Loque, who directs the cell wall engineering program for JBEI’s Feedstocks Division. “Working with the model plant, Arabidopsis, as a demonstration tool, we have genetically manipulated secondary cell walls to reduce the production of lignin while increasing the yield of fuel sugars.” 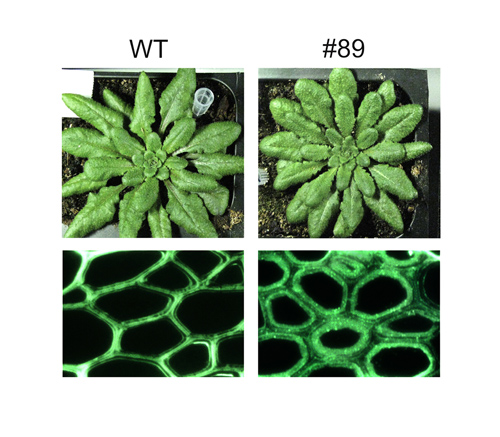 Genetically engineered Arabidopsis plants (#89) yielded as much biomass as wild types (WT) but with enhanced polysaccharide deposition in the fibers of their cell walls. (Image courtesy of JBEI)

JBEI is a scientific partnership led by Lawrence Berkeley National Laboratory (Berkeley Lab) whose mission is to advance the development of next generation biofuels that can provide the nation with clean, green and renewable transportation energy that will create jobs and boost the economy. Loque and his research group have focused on reducing the natural recalcitrance of plant cell walls to give up their sugars. Unlike the simple starch-based sugars in corn and other grains, the complex polysaccharide sugars in plant cell walls are locked within a robust aromatic polymer called lignin. Setting these sugars free from their lignin cage has required the use of expensive and environmentally harsh chemicals at high temperatures, a process that helps drive production costs of advance biofuels prohibitively high.

“By embedding polysaccharide polymers and reducing their extractability and accessibility to hydrolytic enzymes, lignin is the major contributor to cell wall recalcitrance,” Loque says. “Unfortunately, most efforts to reduce lignin content during plant development have resulted in severe biomass yield reduction and a loss of integrity in vessels, a key tissue responsible for water and nutrient distribution from roots to the above-ground organs.”

Lignin has also long posed problems for pulping and animal feed. To overcome the lignin problem, Loque and his colleagues rewired the regulation of lignin biosynthesis and created an artificial positive feedback loop (APFL) to enhance secondary cell wall biosynthesis in specific tissue. The idea was to reduce cell wall recalcitrance and boost polysaccharide content without impacting plant development.

“When we applied our APFL to Arabidopsis plants engineered so that lignin biosynthesis is disconnected from the fiber secondary cell wall regulatory network, we maintained the integrity of the vessels and were able to produce healthy plants with reduced lignin and enhanced polysaccharide deposition in the cell walls,” Loque says. “After various pretreatments, these engineered plants exhibited improved sugar releases from enzymatic hydrolysis as compared to wild type plants. In other words we accumulated the good stuff – polysaccharides – without spoiling it with lignin.” 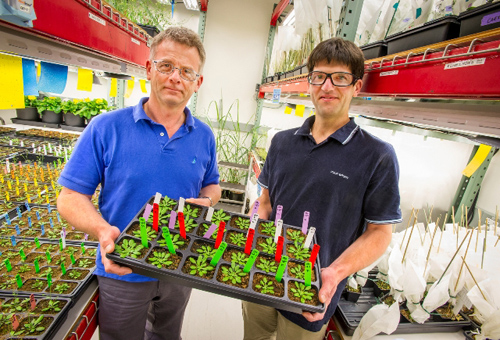 Loque and his colleagues believe that the APFL strategy they used to enhance polysaccharide deposition in the fibers of their Arabidopsis plants could be rapidly implemented into other vascular plant species as well. This could increase cell wall content to the benefit of the pulping industry and forage production as well as for bioenergy applications. It could also be used to increase the strength of cereal straws, reducing crop lodging and seed losses. Since regulatory networks and other components of secondary cell wall biosynthesis have been highly conserved by evolution, the researchers feel their lignin rewiring strategy should also be readily transferrable to other plant species. They are currently developing new and even better versions of these strategies.

“We now know that we can significantly re-engineer plant cell walls as long as we maintain the integrity of vessels and other key tissues,” Loque says.