The invasive kudzu bug has the potential to be a major agricultural pest, causing significant damage to economically important soybean crops. Conventional wisdom has held that the insect pests will be limited to areas in the southern United States, but new research from North Carolina State University shows that they may be able to expand into other parts of the country.

Kudzu bugs (Megacopta cribraria) are native to Asia, and were first detected in the U.S. in Georgia in 2009. They have since expanded their territory as far north as Virginia. The bugs have an interesting life cycle, which has been thought to be a limiting factor on far they can spread.

Eggs laid in the spring hatch into a first generation, which we’ll call “Generation A.” The immature bugs of Generation A normally feed on kudzu plants until they reach adulthood, when they have been known to move into commercial soybean fields. These mature adults lay eggs that hatch into Generation B during the summer months. Generation B kudzu bugs can feed on soybean crops during both their immature and adult life stages, causing significant crop damage.

Because the immature Generation A kudzu bugs have only been seen to feed on kudzu, researchers thought that the pest would not be able to migrate to northern and western parts of the United States, where kudzu doesn’t grow. But now it’s not so clear. 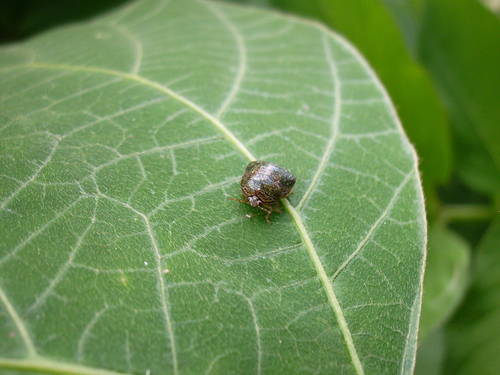 Under controlled conditions in a greenhouse laboratory, researchers at NC State found that immature Generation A kudzu bugs were not limited to feeding on kudzu – they were able to feed exclusively on soybeans, reach maturity and reproduce.

“Researchers began seeing some of this behavior in the wild in 2012 and, while those data aren’t quite ready for publication, our lab work and the field observations indicate that kudzu bugs are potentially capable of spreading into any part of the U.S. where soybeans are grown. And soybeans are grown almost everywhere,” says Dr. Dominic Reisig, an assistant professor of entomology at NC State and co-author of a paper on the research. “It also means that both annual generations of kudzu bugs could attack soybean crops in areas where the bug is already established, which would double the impact on farmers.”

The paper, “First-Generation Megacopta cribraria (Hemiptera: Plataspidae) Can Develop on Soybeans,” is a “rapid communication” article in the April issue of the Journal of Economic Entomology. Lead author of the paper is NC State doctoral student Alejandro Del Pozo-Valdivia. The research was supported by the United Soybean Board and the North Carolina Soybean Producers Association.