LAFAYETTE – Tiny sea creatures no bigger than a thumbtack are being credited for playing a key role in helping provide healthy habitats for many kinds of seafood, according to a new study by the Virginia Institute of Marine Science and U.S. Geological Survey.

The little crustacean “grazers,” some resembling tiny shrimp, are critical in protecting seagrasses from overgrowth by algae, helping keep these aquatic havens healthy for native and economically important species.  Crustaceans are tiny to very large shelled animals that include crab, shrimp, and lobster.

The researchers found that these plant-eating animals feast on the nuisance algae that grow on seagrass, ultimately helping maintain the seagrass that provides nurseries for seafood.  The grazers also serve as food themselves for animals higher on the food chain.

Drifting seaweed, usually thought of as a nuisance, also plays a part in this process, providing an important habitat for the grazing animals that keep the seagrass clean.

“Inconspicuous creatures often play big roles in supporting productive ecosystems,” said Matt Whalen, the study’s lead author who conducted this work while at VIMS and is now at the University of California, Davis. “Think of how vital honeybees are for pollinating tree crops or what our soils would look like if we did not have earthworms. In seagrass systems, tiny grazers promote healthy seagrasses by ensuring algae is quickly consumed rather than overgrowing the seagrass. And by providing additional refuge from predators, fleshy seaweeds that drift in and out of seagrass beds can maintain larger grazer populations and enhance their positive impact on seagrass.” 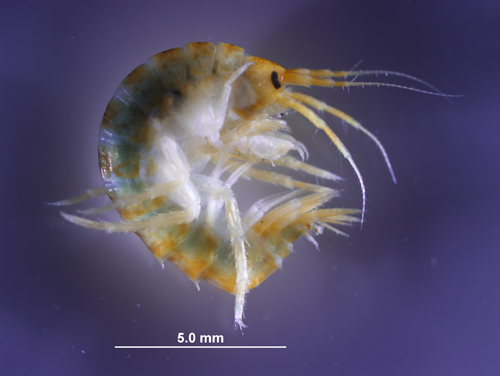 “Not only do these areas serve as nurseries for commercially important fish and shellfish, such as blue crabs, red drum, and some Pacific rockfish, but they also help clean our water and buffer our coastal communities by providing shoreline protection from storms,” Grace said. “These tiny animals, by going about their daily business of grazing, are integral to keeping healthy seagrass beds healthy.”

In fact, the authors wrote, if not for the algal munching of these grazers, algae could blanket the seagrasses, blocking out sunlight and preventing them from photosynthesizing, which would ultimately kill the seagrasses.  Seagrass declines in some areas are attributed partly to excessive nutrients in water bodies stimulating excessive algal growth on seagrasses.

“Coastal managers have been concerned for years about excess fertilizer and sediment loads that hurt seagrasses,” said J. Emmett Duffy of Virginia Institute of Marine Science and coauthor of the study.  “Our results provide convincing field evidence that grazing by small animals can be just as important as good water quality in preventing nuisance algae blooms and keeping seagrass beds healthy.” 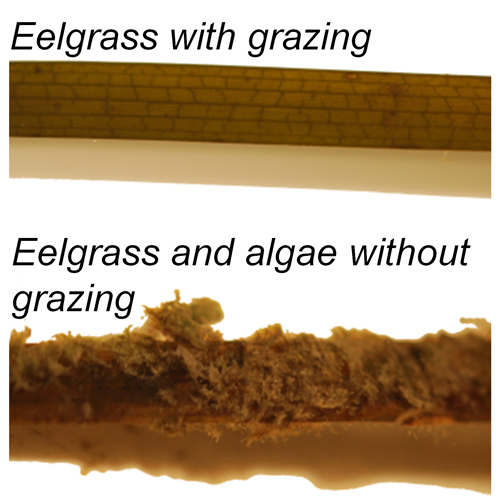 The USGS scientists involved in this study serve as members of a worldwide consortium of researchers examining the health of seagrasses. This research by Virginia Institute of Marine Science and USGS researchers is the first in a series of studies worldwide on seagrass ecosystems.

The study, “Temporal shifts in top-down versus bottom-up control of epiphytic algae in a seagrass ecosystem,” was published in the recent issue of Ecology, a journal by the Ecological Society of America.