Made in IBM Labs: New Chip Technology Paves the Way to a Faster Internet

ARMONK, N.Y., – 09 Nov 2010: IBM today announced a new chip-making technology that can be used to create advanced semiconductors that can keep pace with the exploding number of internet-connected devices and the tidal wave of data they are generating.

The Cu-32 Custom Logic offering employs unique IBM technology — designed by IBM Research — to dramatically increase the memory capacity and processing speeds of chips used in fiber-optic and wireless networks, and in such gear as routers and switches. The technology can help manufacturers and network operators handle the data deluge driven by consumers’ appetites for smart phones and other Web-connected devices.

Systems using chips made with Cu-32 for example, can result in: 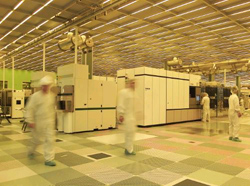 The number of people using the internet has doubled in the past five years, with two billion logging-on in 2010.(4) Smart phones, game consoles, digital TVs, GPS devices and MP3 players are among the consumer gadgets that now ride the internet. As the world’s infrastructure gets further digitized, connected and monitored, vast arrays of machine-to-machine sensors are also beginning to use the internet to transmit data on commuter traffic, buildings’ energy usage or the health of newborn infants, for example. Manufacturers of communications infrastructure will increasingly need breakthrough semiconductor technologies such as Cu-32 to keep up with the demand to secure, store and move an ever-growing amount of web traffic.

Embedded Memory, Made in IBM Labs, Key to Breakthrough Performance

IBM’s embedded DRAM technology provides the most dense on-chip dynamic memory available today, enabling more than 1Gb of memory on a single chip. IBM eDRAM performance has advanced to a point where it can replace conventional on-chip static memory (SRAM) in many applications, taking up 60% less space on the chip, and consuming up to 90% less power.

A suite of new high-sped serial cores (HSS) give Cu-32 advanced capabilities to network with more than a dozen different interface standards. Additionally, IBM’s silicon-on-insulator (SOI) process helps improve energy efficiency in chips using Cu-32. Since its invention by IBM in 1998, more than 100 million SOI chips have been shipped, powering the newest generation of video games and enabling a wide range of enhanced communications applications. More than twenty of the world’s leading semiconductor makers, tool makers and industry suppliers are members of the SOI Industry Consortium, setting the course of future SOI innovation.

“By any measure – from the growing number of mobile users to the explosion we’re seeing in data — network traffic will grow at a pace we haven’t seen before,” said Mark Ireland, VP, Semiconductor Products, IBM. “Cu-32, our most advanced Custom Logic offering, with the industry’s best eDRAM and high speed serial links will provide our infrastructure partners the lead they need to create next-generation networks.”

IBM, as the first provider of eDRAM technology in a custom-logic design system continues to expand its eDRAM offering with a compiler that can create more than 3,000 configurations.  This flexibility enables smarter silicon solutions with memory optimized for a wide range of applications from high-end servers and networking applications to game processors.

IBM’s high-k metal gate (HKMG) SOI technology can provide up to 25% chip performance improvement, up to 30% improved energy efficiency with up to twice the density compared to 45 nm SOI technology, allowing chips built with the Cu-32 process to address an ever wider range of devices and applications.

(1) Cell phone uses a control channel for call setup. The control channel also provides the pathway for SMS messages. The message flows through the SMSC, then to the tower.

(2) (3) Every motion picture ever produced to be streamed in less than one minute.