*Microsoft launches Office 2011 for Mac today, bringing Mac users the latest versions of the company’s productivity software. The release is the latest effort from the Office for Mac team, which has been delivering Microsoft software to the Mac for 13 years*

REDMOND, Wash. – Oct. 26, 2010 – Roughly eight miles separate Microsoft’s Silicon Valley Campus from Apple’s headquarters in Cupertino, Calif., but some might assume the gap is greater. PC is PC, Mac is Mac, and never the twain shall meet, right?

Wilfrid, general manager of Microsoft’s Office for Mac team, regularly makes that eight-mile drive. It’s not far, and he doesn’t think the metaphorical distance is, either. For 13 years, Wilfrid has helped put Microsoft Office, the world’s most popular productivity software, onto the Mac platform. And while conflict might create a good storyline, in the middle of all that noise are customers.

“As someone who works at Microsoft and deals with Apple often, I acknowledge that our companies compete,” Wilfrid says. “Some people choose Windows, and some people choose Mac. That conflict tends to get a lot of attention, but I deal in the reality that there are customers who love their Macs and also love using Office.” 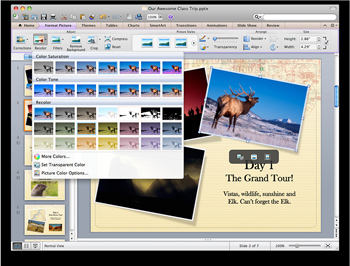 About the image: Edit images from within Word, Excel and PowerPoint documents. Recolor photos and images, apply filters and corrections, and even remove extraneous background imagery directly from the application itself. Image credit: Microsoft

A lot of customers, in fact. According to Wilfrid, three-quarters of all Mac users have Office installed on their machines. “That’s the vast majority of Mac customers counting on Microsoft for a critical piece of their computing needs,” he says. “Mac users need Office because it helps them work with the Windows world.”

Wilfrid is proud of that statistic, which he says highlights the importance of the relationship between the two companies. Today the relationship takes another step forward as Microsoft releases Office for Mac 2011, the company’s productivity software suite tailored for the Mac operating system. Mac users can now install the latest versions of Word, Excel, PowerPoint, and, for the first time, Outlook. Office 2011 is available in 13 languages around the world, and by November the suite will be available in more than 45 countries.

With the release, the company offers Mac customers many of the cloud-based benefits that Windows customers saw with the recently released Office 2010, Wilfrid says.

“Office isn’t just about what runs on a desktop machine or laptop,” he says. “Office is an experience that shows up across your computer, on the Web browser, and on your mobile device.”

So the new release for Mac is focused on delivering anywhere access, better collaboration, and professional design tools to make it more attractive than previous versions, Wilfrid says. First and foremost, Outlook is now included in Office 2011 for Mac. The new Outlook was built from the ground up and works with both on-premises Exchange and the just-announced Office 365, the new cloud service from Office.

Office 2011 has new built-in integration with Windows Live SkyDrive as well as connections to SharePoint so users can manage files and work from any location, Wilfrid says. With Office Web Apps, Mac consumers can edit Office documents straight from their browser.

The release’s new co-authoring tools let users edit the same Word document or PowerPoint presentation simultaneously with other people in different locations who are using Office 2011 for Mac or Office 2010 for Windows. They can also quickly share presentations with anyone who has browser access through PowerPoint broadcasting.

Finally, the team continued its investment in file format compatibility so users can create the same professional-looking Office documents on a Mac as PC users can with Office for Windows. “That’s been our focus since the first time we made Office for Mac,” Wilfrid says “If you print a Word document out for Mac and another for Windows and hold them up to the light – IT pros do it all the time – they will come out the same.”

In a sense, the release of Office 2011 for Mac isn’t really news, Wilfrid says. Microsoft has made Mac-compatible versions of Word and Excel for 26 years, ever since there was a Mac. And since 1997, Microsoft has had a dedicated team focused on building Office for Mac. The team’s work is a critical part of the company’s long-term commitment to deliver Microsoft software and services across platforms that help people work smarter, faster, and better with greater choice and flexibility, Wilfrid says.

Wilfrid has been a part of the Office for Mac team since day one. He started at Microsoft fresh out of college, when he worked as a developer for PowerPoint. In 1997, he went from being responsible for a small handful of dialogues on the Windows version of Office to owning the user interface on PowerPoint for Mac when the new group formed. He worked on the Silicon Valley Campus until two years ago, when he moved to Redmond to oversee the Office for Mac team, which now has groups in Washington, California, and Beijing.

Over the years, Office for Mac has evolved with Office and the Apple platform. But the focus hasn’t changed. “From day one, we focused on making the user experience be both Mac-like and recognizably Office,” Wilfrid says. “Over many, many years, we’ve figured out different ways to make sure that the end product is something that we as Office and Mac users would want to sit down in front of every day and depend on to do our work.”

Because, of course, that’s exactly what the Office for Mac team does every day. Wilfrid carries a MacBook around the Microsoft campus not because he loves the platform or because Apple wants him to but because he and his team are committed to delivering a quality experience to the Microsoft customers who own Macs.

“The one thing that’s held constant over all that time is that customers need Office, and many of those customers have Macs,” he says. “The Mac versus PC was kind of good entertainment, but it never changed our team’s focus or influenced the way we did our jobs.”