A large, newly published study that includes more than 13,500 postmenopausal women has yielded the most definitive associations yet between certain lifestyle and demographic factors and levels of a promising early biomarker of type 2 diabetes risk. 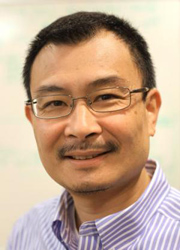 Simin Liu. “By the time you are checking blood glucose it’s too late, (because) you use that as a diagnostic criterion to define diabetes. … This protein (can) predict your future risk six to 10 years down the line.” Image credit: Frank Mullin/Brown University

In a collection of studies described in the new paper, published online Sept. 18 in the journal Clinical Chemistry, Dr. Simin Liu, professor of epidemiology and medicine at Brown, led an effort to measure SHBG levels in 13,547 women who take part of the national Women’s Health Initiative. The team comprehensively investigated nongenetic factors associated with levels of the protein. The researchers found that age, use of estrogen replacement therapy, physical activity, and caffeinated coffee drinking were significantly higher with higher SHBG levels. On the other hand, a high body-mass index (BMI) correlated with low SHBG levels.

Liu’s group had previously established that SHBG can predict type 2 diabetes risk and identified several mutations in the genetic coding for the protein that are also predictive.

“Even though there are genetic influences, this protein doesn’t necessarily stay unchanged in each of us throughout our lives,” Liu said. “This protein seems to capture the cumulative effect between the gene and our environment in reflecting a metabolic state of our body, particularly in the liver, ultimately affecting diabetes risk.”

The researchers also made another important finding: SHBG’s significant associations in women did not vary by ethnic group.

“This is the largest study conducted to date that shows that ethnic-specific differences concerning SHBG levels — if any — are not significant enough to warrant an ethnic specific reference for potential clinical application of this protein for diabetes risk stratification,” said Dr. Atsushi Goto, first author and an endocrinologist at the Japanese Diabetes Research Center of the National Center for Global Health and Medicine in Tokyo.

That research outcome extends the results of a study that the team published last year in the journal. That study reported that SHBG predicted type 2 diabetes risk among black, Hispanic, and Asian or Pacific islander postmenopausal women. Previously it had only been shown in white men and women.

There are several reasons why tracking demographic and lifestyle associations with SHBG levels is important, Liu said. For one, they give doctors who want to assess type 2 diabetes risk or metabolic syndrome a basic frame of reference on what levels of SHBG might exist in patients based on their lifestyle and demographics.

“How do you stratify risk for clinical and preventative interventions?” Liu said. “If you want to use this clinically, you have to establish a population reference, for instance in the sense of age or ethnicity.”

The research may also help to strengthen possible strategies for intervention. Age cannot be affected, but physical activity, BMI, coffee intake, and estrogen therapy can all be adjusted. Knowing that these factors are linked to the biomarker suggests that experiments could be done to see whether changing those factors — exercising more, for example — could change levels of the protein over time in individuals, Liu said. That, in turn, could affect their ultimate diabetes risk.

In addition, the findings may also help explain the possible physiological connections between those factors and risk of type 2 diabetes. For example, drinking regular coffee and having a lower BMI have each independently been associated with a lower risk for the condition. The new research suggests that SHBG may have an intermediating role in those associations. The protein is produced in the liver, Liu said, and it may be that it is a bellwether of the body’s metabolism.

Liu said the study supports the idea of adding SHBG, which is readily detectable in clinical blood work, to the standard of preventive care for patients at potential risk for type 2 diabetes.

“By the time you are checking blood glucose it’s too late, [because] you use that as a diagnostic criterion to define diabetes,” Liu said. “Our argument is that you can go to the doctor’s office and check this protein that can predict your future risk six to 10 years down the line.”