Successfully treating and reversing the effects of multiple sclerosis, or MS, may one day be possible using a drug originally developed to treat chronic pain, according to Distinguished Professor Linda Watkins of the University of Colorado at Boulder.

Watkins and her colleagues in CU-Boulder’s department of psychology and neuroscience discovered that a single injection of a compound called ATL313 — an anti-inflammatory drug being developed to treat chronic pain — stopped the progression of MS-caused paralysis in rats for weeks at a time.

Lisa Loram, a senior research associate who spearheaded the project in Watkins’ laboratory, presented the findings at the Society for Neuroscience’s annual meeting held in San Diego this week. 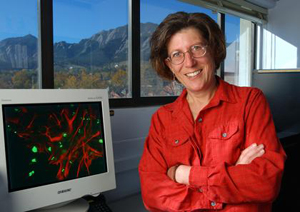 MS is an inflammatory disease where the body’s immune system attacks a protective sheath called myelin that encompasses nerves in the spinal cord and brain. As the disease progresses, the myelin develops lesions, or scars, that cause permanent neurological problems.

“What happens now with MS drugs is they slow or stop the progression of MS, but they don’t treat it,” Watkins said. “They don’t take people back to normal because the lesions caused by MS don’t heal.”

Watkins, Loram and their colleagues hope to use spinal cord and brain-imaging technology to extend their studies to determine if lesions are being healed in rats that received an ATL313 injection.

“If we have a drug that is able to heal these lesions, this treatment could be a major breakthrough in how we treat the symptoms of MS in the future,” she said.

The new findings were quite a surprise to Watkins. The team had originally wanted to look at the drug’s potential in treating pain associated with MS, because about 70 to 80 percent of MS patients suffer from chronic pain that is not treatable.

“What we had originally thought about this class of compounds is that they would calm down glial cells in the spinal cord because their pro-inflammatory activation is what causes pain,” she said.

Under normal circumstances glial cells are thought to be like housekeepers in the nervous system, Watkins said, essentially cleaning up debris and providing support for neurons. Recent work by Watkins and others has shown that glial cells in the central nervous system also act as key players in pain enhancement by exciting neurons that transmit pain signals.

“What’s become evident is that glial cells have a Dr. Jekyll and Mr. Hyde personality,” Watkins said. “Under normal circumstances they do all these really good things for the neurons, but when they shift into the Mr. Hyde formation they release a whole host of chemicals that cause problems like neuropathic pain and other chronic pain conditions.”

They discovered that ATL313 appears to reset the glial cells from an angry activated state to a calm anti-inflammatory state that may heal MS lesions.

Contributing to the findings presented at the Society for Neuroscience annual meeting were Watkins, Loram, Keith Strand, Derick Taylor, Evan Sloane and Steven Maier of CU-Boulder; Jayson Rieger of the company PGxHealth, a division of Clinical Data Inc. based in Newton, Mass.; and Natalie Serkova of the University of Colorado Denver’s Anschutz Medical Campus.