Korean Reunification, and the Sound of Rattling Weapons

On August 15, South Korean President Lee Myung-bak delivered a plan for unification of his country with the Democratic People’s Republic of Korea (DPRK). The proposal was made during the ceremony marking the 65th anniversary of the liberation of the Korean peninsula from the Japanese colonial rule.

According to Lee Myung-bak, unification plan includes three phases. The first phase is the establishment of peace on the peninsula, which necessitates Northerners’ nuclear disarmament. The second phase is the development of economic cooperation aimed at economic recovery of the DPRK. It is followed by the third phase which involves overcoming of the differences in the political systems and the start of negotiations on Korea reunification.

Given the huge difference in the level of economic development of the two Koreas, Lee Myung-bak has proposed imposing a special tax which is intended to help raise funds for the union. Economists have estimated that they need to collect approximately a trillion dollars, and for 60 years every taxpayer in South Korea will pay two percent more taxes than today.

Perhaps, knowing about the enormous cost, the president of South Korea did not specifically mention the date of unification. At the same time, polls show that the population of the country agrees with him. Most South Koreans want to reunite with their counterparts in the north. But, given the difference in the level of the two countries, they understand that the process will be lengthy.

It is interesting that such amicable statement comes on the eve of the beginning of the regular joint naval exercises of South Korea and the United States in the Yellow Sea. The exercises will last until August 26. 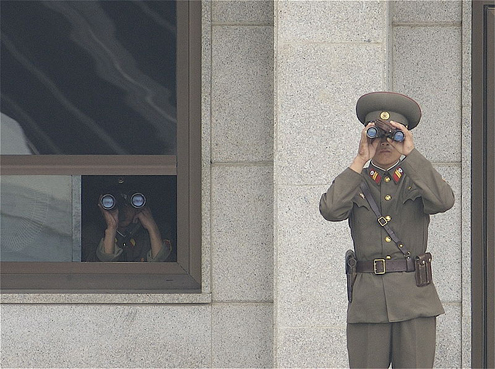 They will be the largest in the history of military cooperation between the two countries. 56 thousand soldiers from South Korea will take part in the exercise as well as 28,500 U.S. soldiers. Seoul and Washington do not hide the fact that the exercise will be a response to the loss of the South Korean corvette Cheonan this spring, in which participants of the exercises accuse Pyongyang.

Considering this “background,” no comments were provided about the statement regarding unification of Korea made by Lee Myung-Bak. North Korea has traditionally spoken about the trainings in the strongest possible terms. “These trainings are an irresponsible step against us. If the warships reach our borders, the army and people will deal merciless blows at the U.S. imperialists and the gang of Lee Myung-bak’s traitors. We promise the most severe response the world has ever seen,” says Pyongyang statement.

Actually, such a belligerent rhetoric is nothing new. Every time the U.S. and South Korea plot maneuvers in the Yellow Sea or Sea of Japan, North Korea threatens to “imperialists” with all sorts of punishments. In response to the recent South Korean trainings that took place just over a week ago, Pyongyang threatened with a “physical response.” Similar things have happened in the past year, and the words remained just that, words. It is not surprising that the statement about a “very strong response” caused no reaction of Seoul and Washington.

Acting in this contradictory manner, President Lee Myung-bak is probably trying to kill two birds with one stone. On the one hand, he makes it clear that he wants to see the country united, which will allow it to overcome not only the political divisions, but also the dividing lines within families. On the other hand, he wants to show to North Korea that he is not going to silently watch its transformation into a nuclear power and endure endless bellicose statements of its leadership.

Concerns over North Korea’s actions are understandable in many ways. The country is poor, closed, and it is difficult to predict that its leadership has on its mind. However, the organization of the exercises involving North Korea’s worst enemy – the United States – makes the prospect of inter-Korean dialogue about unification rather obscure. Hardly anyone wants to engage in a dialogue when rockets are launched in their direction, regardless of the intentions.

Speaking about the unification of Korea, the example of Germany immediately comes to mind, when 20 years ago the Federal Republic of Germany virtually swallowed the German Democratic Republic. However, the differences are obvious to the naked eye. Despite the fact that relations between Germanys were difficult, they never exchanged threats of “physical response.” Neither had they held such large-scale trainings directed against each other. Finally, in 1950-1953 North and South Korea fought each other, which was not the case with East Germany and West Germany.

Nor did East Germany and West Germany had an economic abyss like North and South Korea have. Yes, the government of already united Germany has invested over two trillion Euros in the economy of the eastern lands. But East Germany has never teetered on the brink of starvation, like the DPRK. It was the most developed among all socialist countries, a country with a developed (though many times inferior to West Germany) economics, where the system of grocery ration cards was the story of the post-war devastation of the second half of the 1940’s.

Political differences among the two Germanys were also not as great as those of the two Koreas. Yes, the GDR, as well as North Korea, was building socialism. But it was much softer, and there was no cult of deified chiefs like Kim Il Sung and Kim Jong Il. East Germanic managers were much quicker to part with power. And the “iron curtain” on the border of the two Germanys was not as impenetrable. People from the GDR did have opportunities to officially travel to the FRG, albeit very limited. There is nothing similar in the case of North and South Korea.

Korea will have to walk a much more complex path to unification than Germany had in its time. The US-South Korea trainings, as well as the DPRK’s responses, only postpone the reunification of the two parts of the Korean peninsula.

1 comment on “Korean Reunification, and the Sound of Rattling Weapons”