, — Sharon Herbert and her team were wrapping up their dig at the Tel Kedesh site in Israel, sweeping the site in the 140-degree heat, when a student showed University of Michigan doctoral instructor Lisa Cakmak what he first thought was a gold candy wrapper.

The candy wrapper turned out to be what researchers believe is the heaviest and most valuable gold coin ever found in Israel, according to Herbert, director of the U-M Kelsey Museum of Archeology and co-director of the dig.

The 2,200-year-old coin weighs nearly an ounce at 27.71 grams and was found in mid-June at the Tel Kedesh site in the Upper Galilee of on the Lebanese border, Herbert said. Only the second of its type known and one of the largest denominations minted in antiquity, the coin dates to 191/90 BCE, according to Herbert.

“It was pretty surreal,” Herbert said of the remarkable find. “I have been digging for 30 years and never found a gold coin. It was found in a wall, believed to be a kitchen wall, that we had first uncovered in 1999 and cleaned every dig season since.” 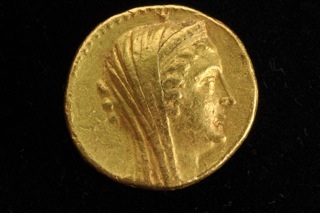 About the image: One side of 2,200-year-old coin found in Israel. Photo credit: Sharon Webb. 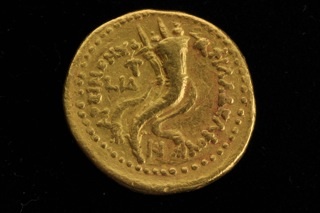 About the image: Other side of 2,200-year-old coin found in Israel. Photo credit: Sharon Webb.

It carries the image of a Ptolemaic Egyptian queen on its face and mint mark of the Ptolemaic mint at Alexandria on its reverse, together with a date of the 14th year of the reign of Ptolemy V. The coin weighs six times more than most coins from that era, Donald Ariel, head of the Coin Department of the Israel Antiquities Authority told the Associated Press. Ariel announced the find on Aug. 11. The coin dates back to the rule of the Iraq-based Seleucid Empire, though it was minted by the rival Egyptian Ptolemies.

The coin is the second gold Ptolemaic coin ever found in . The first weighed just two grams or 0.07 ounces, he said.

“This is a truly remarkable find, not only for its rarity and value, but also because it reflects the complexity and diversity of the Hellenistic age,” said Herbert, the John G. Pedley Collegiate Professor of Classical Archaeology and director of the Department of Classical Studies.

Herbert, co-director of the dig with Andrea Berlin, the James R. Wiseman chair of Classical Archaeology at , was supervising a team of researchers from U-M and the at the time of the discovery. Andrew Booz, a student, found the coin.

They took it to their work space where they cleaned and weighed it and then sent pictures to Ariel, who determined how rare the coin was after talking to experts, Herbert said. They put the coin in the safe of the bed and breakfast where they were staying and celebrated.

The coin is in a safe at the Israel Antiquities Authority in Jerusalem and is expected to go on display Israel Museum soon, she said.

For information on the Kelsey Museum visit: www.lsa.umich.edu/kelsey