Former U.N. secretary-general Kofi Annan predicted during a campus visit that the civil war in Syria will become even more tragic before the international community takes action to help resolve the conflict, but said he is optimistic about the political and economic prospects for Africa in the years ahead.

Annan took part in a Town Hall meeting on Feb. 7 sponsored by the Jackson Institute, and spoke to a full-capacity crowd in the Law School’s Levinson Auditorium. More than 100 guests who were unable to get seats in the auditorium watched the Town Hall meeting via live video in a Law School classroom.

At the event, Annan was interviewed by John Negroponte, the Brady-Johnson Distinguished Practitioner in Grand Strategy at Yale and senior fellow at the Jackson Institute, who is also former U.S. ambassador to the U.N. The two reflected on Annan’s two terms as the seventh U.N. secretary general, a post he held from 1997 to 2006, including his efforts to reform the international body and his leadership during violent world conflicts such as those in Kosovo, East Timor, and Afghanistan, among others. 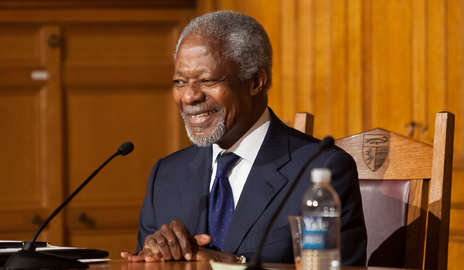 The following is a brief summary of some of the topics they addressed.

Career choice and influences: Annan, who spent his entire career at the U.N. with the exception of four years as the director of tourism in his native Ghana, said he was shaped by several experiences, including witnessing his country gain independence as a teenager at a time when that possibility seemed remote. “I grew up believing that change was possible, even the most radical change, and went through life testing and pushing change whenever I could. So even today, when told it can’t be done, I say, ‘Let’s test it.’”

He said his education on three continents (in Africa, as an undergraduate at Macalestar College in Minnesota, and in Geneva, Switzerland, for graduate work) allowed him to “respect different cultures and environments.” He also recounted how, when he was a youngster, a teacher showed his class a sheet of white paper marked only with a small black dot in one corner. When the teacher asked his students what they saw, all answered that they saw a black dot. “Not a single one of you saw the broad white on the page,” commented Annan’s teacher, who then admonished, “Don’t go through life focusing on the negative; see the positive as well.”

Annan joked about his refusal while in Minnesota to wear earmuffs — believing them to be “inelegant.” But on one cold day, his ears froze. That and other experiences, he said, taught him “that you don’t walk into an environment and believe you know more than the natives. You listen to the natives and watch them.”

U.N. reform efforts: Annan is noted for forging ties between the U.N. and civil society and the private sector, but acknowledged that his effort to reform the Security Council to allow for greater global representation was unsuccessful. He told his audience that he continues to believe such reform is “absolutely essential.”

“The [Security] Council and its composition is based on the geopolitical realities of 1945,” Annan remarked. “The world has changed; the world has evolved and moved on, and the U.N. must. When I look at the world today and look at the five permanent members of the Security Council, and then compare the emerging countries: India, with one-fifth of the world’s population, is not represented on the council. Japan, the second largest contributor [to the world economy], is not represented. Latin America doesn’t have a single permanent seat, and Africa — with 54 countries — doesn’t have a single permanent cabinet seat.”

He said he was met with disagreement from world leaders “at every turn” about how to achieve a more fully representative Security Council, such as Pakistan objecting to India’s membership and Nigeria opposing the recommendations of Egypt for two permanent representatives — one from north Africa and one from sub-Saharan Africa.

Annan said his belief in the need for reform of the Security Council hasn’t wavered. “If we do not reform, we are not going to get the cooperation that we are going to need from these emerging countries,” he stated.

Civil war in Syria: Annan, who most recently served as the Joint United Nations-Arab League Special Envoy to Syria, noted that one of the reasons he stepped down from the post last year was because of the inability of the U.N. Security Council to rally behind his efforts to achieve a cease fire.

“Two years on, we are no way near a solution,” said Annan. “I’m not sure the Security Council is going to come together anytime soon. Discussions are going on, and I think we need leadership from the United States and Russia. … Syria is very tragic, and I think it is going to get worse. I think we need the Security Council to come together, make a common cause and put sustained pressure on the region and the parties to resolve [the conflict]. … This is not a type of crisis where one side wins and the other side accepts and joins in. It will lead to revenge killings, ethnic cleansing of the other. It will get much worse than it is today. … I am really worried about where we are headed in Syria.”

Prospects for Africa: Annan said that if Africa is able to quench political and tribal conflicts such as the situation in Mali, he believes that the economic and social future of African nations over the next 20 years is bright. He noted that 60% of the world’s most arable land is in Africa, creating the opportunity for the continent to be an important contributor to the “global food security and nutrition system.” He also said that young Africans educated abroad are returning to their home countries in increasing numbers and contributing in dynamic ways to their nations’ economic and cultural development. The International Monetary Fund, he added, predicts that six of the 10 fastest-growing economies of the future will be in Africa.

“The next generation of Africans are determined to make a difference,” said Annan. Then, looking at a contingent of African students at the Town Hall meeting, he remarked: “It’s your world now. You have to go back and make a difference.”

Annan’s Yale visit marked the publication of a five-volume set of his official U.N. papers. The publication project is a collaboration between Yale and City College of New York (CUNY) and is headed by Jean Krasno, a faculty member at CUNY and a distinguished fellow in Yale’s International Security Studies program.