It’s in the Genes: Research Pinpoints How Plants Know When to Flower

Scientists believe they’ve pinpointed the last crucial piece of the 80-year-old puzzle of how plants “know” when to flower.

Determining the proper time to flower, important if a plant is to reproduce successfully, involves a sequence of molecular events, a plant’s circadian clock and sunlight.

Understanding how flowering works in the simple plant used in this study – Arabidopsis – should lead to a better understanding of how the same genes work in more complex plants grown as crops such as rice, wheat and barley, according to Takato Imaizumi, a University of Washington assistant professor of biology and corresponding author of a paper in the May 25 issue of the journal Science.

“If we can regulate the timing of flowering, we might be able to increase crop yield by accelerating or delaying this. Knowing the mechanism gives us the tools to manipulate this,” Imaizumi said. Along with food crops, the work might also lead to higher yields of plants grown for biofuels. 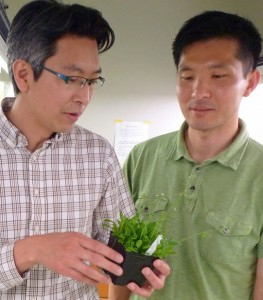 Takato Imaizumi and Young Hun Song in the Takato plant lab at the University of Washington. Image credit: U of Washington

At specific times of year, flowering plants produce a protein known as Flowering Locus T in their leaves that induces flowering. Once this protein is made, it travels from the leaves to the shoot apex, a part of the plant where cells are undifferentiated, meaning they can either become leaves or flowers. At the shoot apex, this protein starts the molecular changes that send cells on the path to becoming flowers.

Imaizumi and the paper’s co-authors investigated what’s called the FKF1 protein, which they suspected was a key player in the mechanism by which plants recognize seasonal change and know when to flower. FKF1 protein is a photoreceptor, meaning it is activated by sunlight.

This system keeps plants from flowering when it’s a poor time to reproduce, such as the dead of winter when days are short and nights are long.

The new findings come from work with the plant Arabidopsis, a small plant in the mustard family that’s often used in genetic research. They validate predictions from a mathematical model of the mechanism that causes Arabidopsis to flower that was developed by Andrew Millar, a University of Edinburgh professor of biology and co-author of the paper.

“Our mathematical model helped us to understand the operating principles of the plants’ day-length sensor,” Millar said. “Those principles will hold true in other plants, like rice, where the crop’s day-length response is one of the factors that limits where farmers can obtain good harvests. It’s that same day-length response that needs controlled lighting for laying chickens and fish farms, so it’s just as important to understand this response in animals.

“The proteins involved in animals are not yet so well understood as they are in plants but we expect the same principles that we’ve learned from these studies to apply.”

First author on the paper is Young Hun Song, a postdoctoral researcher in Imaizumi’s UW lab. The other co-authors are Benjamin To, who was a UW undergraduate student when this work was being conducted, and Robert Smith, a University of Edinburgh graduate student. The work was funded by the National Institutes of Health, and the United Kingdom’s Biotechnology and Biological Sciences Research Council.