Initial, positive results have been reported for a therapeutic vaccine candidate for treating patients with genital herpes. This first-in-class, investigational, protein subunit vaccine, GEN-003, is under development by Genocea Biosciences Inc.

One of several components of the vaccine was designed at the UW in Dr. David Koelle’s lab in the Division of Allergy and Infectious Diseases, Department of Medicine. Genocea, located near Boston, is a clinical-stage biopharmaceutical company for the discovery and development of T cell vaccines to prevent and treat infectious diseases. 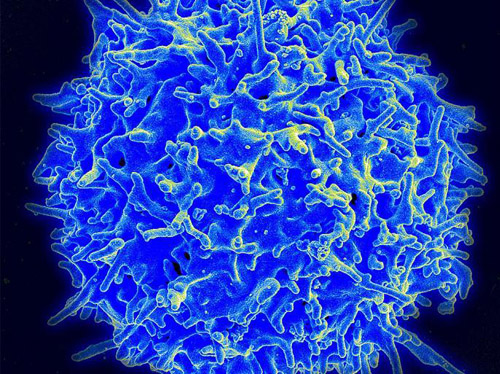 Scanning electron micrograph of a human T cell. The GEN-003 herpes vaccine candidate is designed to manipulate the immune responses of T cells, among other therapeutic effects. Image credit: NIAID

Wald and her team presented the initial findings of the first-in-human clinical trial of the novel GEN-003 T cell vaccine Sept. 12 at a session of the Interscience Conference on Antimicrobials Agents and Chemotherapy in Denver.

The team reported results from the Phase 1/2A clinical study. The ongoing Phase 1/2A clinical trial of GEN-0300 is a double-blind, placebo controlled, dose escalation study to evaluate safety and measure the immune response generated by the candidate vaccine.  The study enrolled 143 volunteers with moderate-to-severe recurrent genital herpes.

Genocea plans to move into Phase 2 of this trial in 2014 to further evaluate GEN 003’s safety and effectiveness in a larger group of patients. 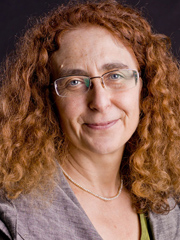 Genital herpes is a sexually transmitted disease caused by herpes simplex virus type 2. The infection can provoke recurring episodes of painful genital sores.  An estimated 50 million to 60 million Americans are affected. At present, no vaccine is approved to prevent or treat genital herpes.

At unpredictable times in those carrying the infection, the herpes virus will come out of hiding and  surface on the genitals, sometimes producing blisters and discomfort, and sometimes arising without any noticeable symptoms.  This surfacing is called viral shedding. Shedding can spread the infection to others during sexual relations or during birth. Viral shedding is a marker both of the risk of recurrence and the transmission of infection.

“These are the first data that provide compelling evidence that a vaccine administered to people with genital herpes can affect their infection,” Wald said. “We are excited that GEN-003 reduced viral shedding as this finding paves the way for future trials that will measure the impact on clinical outbreaks. The ability to reduce viral shedding is critical, as that is the main driver of transmission of HSV-2 to sexual partners and newborns.”

The first-in-human clinical trial was not designed to test whether GEN-003 lessens symptoms or lowers how often a breakout occurs. However, an exploratory analysis suggested that the interval between the first immunization with GEN-003 and the next recurrence of genital herpes might be longer in those receiving the actual candidate vaccine, rather than the placebo injection.

“The initial results are unprecedented in the clinical development of vaccines for herpes simplex virus-2,” noted Chip Clark, president and CEO of Genocea.  “We are proud to be pioneers in the field of T cell-directed vaccines. We will complete this study and continue clinical development of GEN-003 with urgency, in order to bring this promising treatment to a large patient population that is in dire need of an approved vaccine that can prevent or treat their disease. “

The vaccine contains, among other components, a proprietary adjuvant, trademarked Matrix-M. licensed from Novavax, Inc. The adjuvant has a product that, in previous clinical studies, has been shown to stimulate B and T cell immune responses.