Mobile computing in the ‘bring your own device’ era

Early in September Yale passed a milestone in mobile computing, with a record 39,414 mobile devices connected to its wireless networks. As on most college campuses the growth of mobile computing at Yale has been explosive, from well under 10,000 devices three years ago to almost 40,000 today.

A recent Gartner study showed that smartphone ownership among college students went from 55% in 2011 to 62% in 2012, and the percentage of students using their smartphones for academic work doubled in the same period. The typical U.S. college student now routinely uses between 2-3 wireless devices, and higher education computing experts predict that average to grow to 3-4 devices over the next year.

Every academic year brings a new flood of mobile devices onto the campus. Yale ITS Senior Director for Campus Technology Services Jeff Capuano says “We spent two days on Old Campus during freshman move-in assisting students with configuring their devices for the Yale network.  This year was the smoothest it has ever gone—we had minimal issues with students unable to connect.” 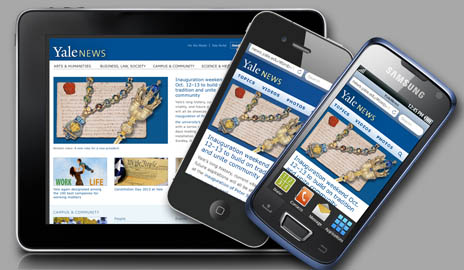 Today students, faculty, and staff all show up on campus expecting to use a wide variety of personal wireless devices to support their activities. This new era of “bring your own device” (BYOD) presents campus IT experts with many challenges. University CIO Len Peters says “In the past basic coverage was the big issue, as in ‘let’s get wireless into the residential colleges, let’s get wireless into the classrooms,’ but now we’re just as focused on growing the capacity of the wireless network.”

With all the new mobile devices flowing onto campus you might think that Yale would save money by not needing to provide basic computing hardware, but like 70% of college campuses Yale has seen increased costs, mostly for the networking infrastructure needed to support the manic growth of mobile hardware.

“Over the summer we have installed or upgraded more than 800 wireless access points to bring the number of total access point to more than 6,450. We are now preparing to launch the next generation of wifi 802.11ac with the opening of Evans Hall on the new School of Management campus,” says ITS’s Capuano. Peters says “For me, thinking about this strategically, the message is that we need to think far enough out in our planning to ensure that we have the funding and technologies in place to support the huge growth in mobile across the campus.”

Only about 19% of staff and faculty wireless devices are bought by Yale, and so many unsecured devices are potential wild cards for data security. “Security is a big factor when you think about staff and faculty use of the network to support Yale business. If we want Yale people doing business on mobile devices we need to provide secure ways to get access to the appropriate secure networks and systems,” says Peters.

“We’re putting in security technology behind the scenes to help manage the access issues, so that the network itself will handle many of the business rules and access restrictions, so a lot of these protections will be transparent to the average user. It’s important for us to create architectures that are built on open standards, that allow the majority of mobile devices to participate in this new ecosystem, while still respecting the University’s need for security and confidentiality in some areas.”

ITS believes the new mobile technologies and devices are crucial for productivity in the Yale community. As Len Peters says, “We’re BYOD friendly. We have to operate under the assumption that people are going to use their personal devices. To check and write email, use the Web, and to create and save documents. We support the growing demand for the use of wireless, we’re providing that capability, but also insuring that things that need to remain private are kept secure.”

For a view on how mobile devices are finding their way into Yale’s classrooms, see: