In The Dragonfish’s Mouth: The Next Generation of Superstars to Stir Up Our Galaxy

TORONTO, ON – Three astronomers at the University of Toronto have found the most numerous batch of young, supermassive stars yet observed in our galaxy: hundreds of thousands of stars, including several hundreds of the most massive kind –blue stars dozens of times heavier than our Sun. The light these newborn stars emit is so intense it has pushed out and heated the gas that gave them birth, carving out a glowing hollow shell about a hundred light-years across.

These findings will be published in the December 20 issue of Astrophysical Journal Letters. For the researchers, the next step is already clear: “By studying these supermassive stars and the shell surrounding them, we hope to learn more about how energy is transmitted in such extreme environments,” says Mubdi Rahman, a PhD candidate in the Department of Astronomy & Astrophysics at the University of Toronto, who led the work with his supervisors, Professors Dae-Sik Moon and Christopher Matzner.

Such large nurseries of massive stars have been noticed in other galaxies, but were so far away that all stars are often blurred together on images taken by telescopes. “This time, the massive stars are right here in our galaxy, and we can even count them individually,” Rahman says. 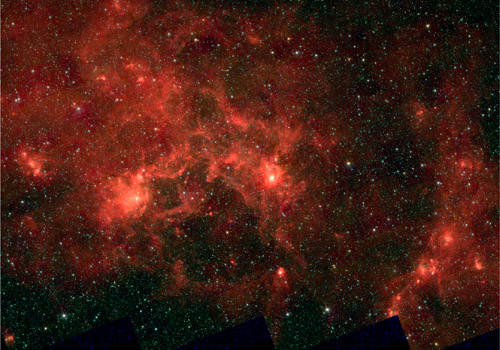 The dragonfish star cluster is a batch of newborn stars found by three U of T astronomers. Image credit: NASA/JPL-Caltech/GLIMPSE Team/Mubdi Rahman

Studying the individual stars will require intricate measurements. The cluster of bright stars is located nearly halfway across our galaxy, 30,000 light-years away, and the line of sight is blocked by dust. “All this dust made it difficult for us to figure out what type of stars they are,” Rahman says.

“These stars are incredibly bright,” Rahman says, “yet, they’re very hard to see.” Before the light from these stars can reach us, most of it is absorbed by the intervening dust in our galaxy. This makes the brightest stars in the cluster appear as dim as smaller, nearby stars. The fainter stars in the cluster appear so dim that they are not seen.

The researchers used the New Technology Telescope at the European Southern Observatory in Chile to collect whatever light they could from a few dozen stars. They measured in details how much light the stars emit in each colour, and were finally able to confirm that at least a dozen stars in the cluster were of the most massive kind, some possibly a hundred times more massive than our Sun. 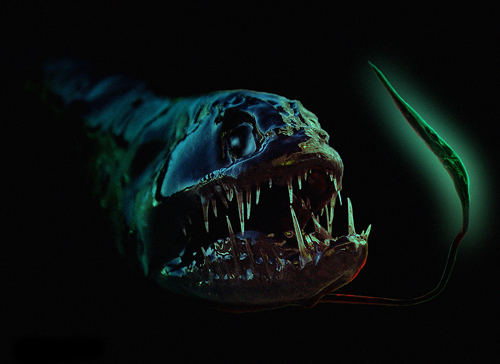 The high-resolution illustration of the animal, created by Peter Shearer after digitally altering his photo of a dead Black Dragonfish (with left and right flipped for convenience). Image credit: Peter Shearer, www.petershearer.co.nz

In fact, before turning a ground telescope toward the stars themselves, Rahman first noticed the glow from the large shell of heated gas using the WMAP satellite, which is sensitive to microwaves (between radio waves and visible light). To make an image of the gas shell being blown away and heated up, the researchers used the Spitzer satellite, which works with infrared light (between microwave and visible light).

Rahman suggested the name “Dragonfish” after comparing the infrared image of the celestial gas shell with Peter Shearer’s illustration of the deep-sea creature with the same name. The astronomical image resembles a dark gaping mouth-like shape with teeth, two eyes, and a bright fin to the right. The “mouth” is the volume from which the gas has been cleared by the light of the stars, pushed outward to form a shell that is particularly bright in spots corresponding to the eyes and the fin of the animal.

“We were able to see the effect of the stars on their surroundings before seeing the stars directly”, Rahman says. This would be like seeing lit faces and red cheeks from the heat of a campfire, without being able to see the logs and flames themselves.

In the same way that red embers are cooler than the blue flame of a welding torch, the gas is cooler than what is heating it, and thus glows redder than the blue stars. Compared to the colours of a rainbow ranging from red to blue, most of the light emitted by the heated gas is in fact redder than red, and thus infrared –less affected by gas or dust, and invisible to our naked eyes, but not to appropriate telescope instruments. At the other end of the rainbow, the giant stars in the cluster are bluer than blue, and emit mostly in the ultraviolet, which is blocked by dust and thus not visible on the image.

“But we had to make sure what was at the heart of the shell,” Rahman says. Now that the astronomers have identified several stars there as very massive, they know that these stars will burn their nuclear fuel relatively quickly in astronomical terms: within a few million years (thousands of times faster than for our Sun) even though the giant blue stars contain dozens of times more fuel than our Sun.

“Still, if you thought the inside of the shell was empty, think again,” Rahman says. For each of the few hundred superstars the researchers may have spotted, there are thousands of average stars more akin to our Sun. When the superstars have burned through their fuel, they will explode and release metals and other heavy atoms that may help form rocky planets around smaller, quieter stars –perhaps providing the building blocks for life.

“There may be newer stars already forming in the eyes of the Dragonfish,” Rahman says. Some areas in the shell glow particularly bright, and the researchers think the gas there may have been compressed enough to ignite even more stars.

The gas now in the shell is the remainder of the very gas that gave birth to the stars, and there is a lot of it: the mother shell is more massive than the cluster of its babies. But with no mother anymore to keep them reined in via its mass and gravity, all the young stars may start wandering off in all directions. “We’ve found a rebel in the group, a runaway star escaping from the group at high speed,” Rahman says. “We think the group is no longer tied together by gravity: however, how the association will fly apart is somethie still don’t understand well.”