The goal of this effort is to nourish solar adoption by developing the capability to analyze and understand key solar market indicators that can make solar system development more cost competitive. Using IBM’s Intelligent Operations Center (IOC) for Smarter Cities as the backbone, this analytics-based approach will help New York City monitor and analyze solar production and capacity through a virtual control room that will provide a dashboard view of key indicators.

The collaboration is part of ‘Solar Market Analytics, Roadmapping, and Tracking NY’ (SMART NY), a groundbreaking project supported in part by the U.S. Department of Energy (DOE) ‘Rooftop Solar Challenge’, part of the DOE SunShot Initiative which is striving to make solar energy cost-competitive with other forms of energy by the end of the decade. 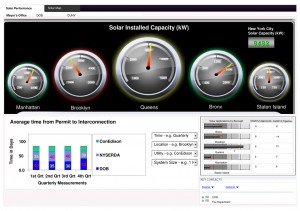 With IBM’s help; CUNY Ventures plans to develop NYC into a solar energy hub that offers analysis of key solar market performance indicators, providing a model to other cities across New York State, North America and the world. CUNY Ventures aims to create a sustainable model that can incorporate additional data and provide analytics to help city leaders and utility planners integrate other forms of renewable energy and better manage city operations, leading to efficiencies in areas such as water, transportation and emergency response.

IDC Government Insights estimates that the growing availability of intelligent technology solutions will accelerate global investment in smart city technologies to $40.9 Billion in 2012. IBM and CUNY Ventures have joined forces to help NYC compete for this growing market opportunity.

“As people migrate to urban centers in greater numbers, demand increases on city infrastructures and resources,” said Craig Hayman, general manager, IBM Industry Solutions. “Intelligent automation of key services such as energy, water, transportation and public safety is the solution to help meet these challenges. Developing leadership in sustainable resources, as New York is doing with solar energy, serves as a model for meeting citizens’ needs while achieving the operational goals of the city.”

“CUNY faculty helped develop the NYC Solar Map that displays the solar potential of every building in the city,” said City University of New York Chancellor Matthew Goldstein. “Now our CUNY team is working with our partners on groundbreaking solutions that can help New York accelerate the adoption of this clean renewable energy.” 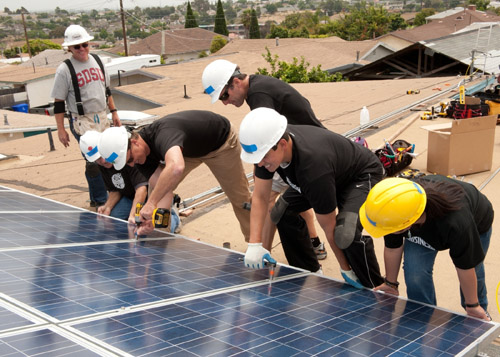 The new system will use analytics to deliver real time data from a variety of sources including the NYC Solar Map (link), providing a searchable dashboard of key performance indicators and trends. Using this technology, CUNY Ventures will be able to fine-tune current resource usage and quickly identify barriers. Upon successful completion in year one, plans are in place to expand this effort to other major jurisdictions in New York State with a goal of creating standards and streamlining the permits process.

The Solar America City Partnership has already launched several major projects including the NYC Solar Map; an online, interactive tool that estimates the solar power potential for the one million rooftops in the five boroughs. The 15 billion points of data that back up the map also provides analysis that enough solar power can be generated on the City’s rooftops to offset costly upgrades to the grid or the use of dirty generators during the City’s peak usage periods. The Solar Map makes it clear that financially, technically and environmentally, solar is a real, viable option for NYC. Included in the individual calculations for every building is how much solar can be installed, how much power that will generate, how much can be saved on an annual electricity bill, how many pounds of carbon emissions can be reduced each year, and what the equivalent would be in planting trees. A built-in financial calculator provides a cost break down and payback time- a surprising 5-7 years for most installations with the current incentives in place. The New York City Solar Map also displays existing solar installations and provides practical information and steps for installing solar.