Not having enough Chinook salmon to eat stresses out southern resident killer whales in the Pacific Northwest more than having boatloads of whale watchers nearby, according to hormone levels of whales summering in the Salish Sea.

In lean times, however, the stress level normally associated with boats becomes more pronounced, further underscoring the importance of having enough prey, according to Katherine Ayres, an environmental and pet-behavior consultant who led the research while a University of Washington doctoral student in biology. Ayres is lead author of a paper appearing online June 6, in the journal PLoS ONE.

In a surprise finding, hormone levels show that southern resident killer whales are best fed when they come into the Salish Sea in the late spring, Ayres said. The Salish Sea includes Puget Sound and the straits of Georgia, Haro and Juan de Fuca. Once there they get a necessary boost later in the summer while eating Chinook salmon at the height of the Fraser River run.

While Fraser River Chinook are an important food source, helping the southern resident killer whales may mean giving additional consideration to spring runs of Chinook salmon off the mouth of the Columbia River and other salmon runs off the West Coast, if that’s where the orcas are bulking up in the spring, Ayres said. “Resident” killer whales are fish-eating orcas, unlike the so-called “transient” orcas that eat marine mammals.

For the study, scientists analyzed hormonal responses to stress that were measurable in whale scat, or poop. Many samples were collected using a black Labrador named Tucker on board a small boat in the vicinity of individuals or groups of whales. Even a mile away, Tucker can pick up on the scent he’s been trained to recognize as the fishy smell distinctive to southern resident killer whales, a group of orcas listed as endangered by both Canada and U.S.

“This is the first study using scat-detection dogs to locate killer whale feces,” Ayres said. “The technique could be used to collect scat and study stress in other species of whales, always difficult subjects to study because the animals spend 90 percent of their time underwater.” 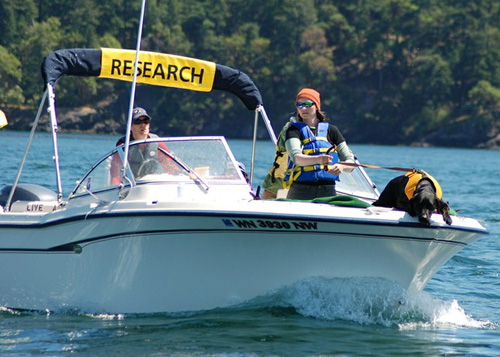 Katherine Ayres handles Tucker as he zeros in on the scent of whale poop. Tucker never goes into the water, he just leans over the bow in the direction the boat should travel. Image credit: Jeanne Hyde

Since the population of southern resident killer whales declined nearly 20 percent between 1995 and 2001, scientists and managers have wondered if the animals weren’t thriving because of lack of food, the closeness of boats, toxins built up in their bodies or a combination of all three.

“Behavior is hard to interpret, physiology is easier,” said co-author Samuel Wasser, UW professor of biology and developer of the program using dogs like Tucker to detect scat for biological research. “Fish matter most to the southern resident killer whales. Even if boats are important to consider, the way you minimize that impact is to keep the fish levels high.”

It’s the same with toxins, Wasser said. The study being published in PLoS ONE specifically considered stress caused by inadequate prey and boats. But Wasser said that toxins accumulating in body fat will likely affect killer whales most when food is scarce and they start to use that stored fat, releasing toxins into their bodies when their physical condition already is in decline. When whales are well-fed, toxins should be less of a factor, he said.

In the study researchers examined the level of two hormones to study physiological responses to boat and food stresses.

One type of hormone, glucocorticoids, are released in increasing amounts when animals face immediate challenges, whether it’s a shortage of food or the fight-or-flight response when threatened, Ayres said. When whale watching boats and other vessels were most numerous in the summer, glucocorticoids should have spiked if the whales were bothered. Instead glucocorticoids went down, driven by an increase in the number of Fraser River Chinook.

The other hormone, thyroid hormone, tunes metabolism depending on how much food is available, for example ramping down metabolism to lower the energy an organism expends when food is scarce, Ayres said. Unlike glucocorticoids, thyroid hormone levels do not respond directly to stresses such as boats being nearby. During summers, thyroid levels of Salish Sea whales dipped while they awaited the arrival of Fraser River Chinook, increased again when food became plentiful and declined once again as the Chinook run petered out.

Unexpectedly, the thyroid hormone measures showed the whales were best fed when they first arrive in the Salish Sea, better than at any time in the five months they spent there, Wasser said.

“We assume winter is a lean time, so to come into the Salish Sea at their nutritional high for the year, then clearly they have been eating something – a very rich food source – before they arrive,” Wasser said. “It appears another fish run is critical to them before they get here.”

Some evidence points to the Chinook returning to the Columbia River, although Wasser said that more spring data are needed.

The PLoS ONE paper follows a draft report issued May 3 by U.S. and Canadian fisheries experts considering to what extent salmon fishing is affecting the recovery of the southern resident killer whales. Wasser said the report pays too little attention to year-to-year salmon variability, but got it right when it said more needs to be known about what’s happening to the whales in the winter and, particularly, in early spring.

Among other things, the report said Chinook stocks are currently harvested at a rate of about 20 percent “so there is limited potential for increasing Chinook abundance by reducing fishing pressure,” according to the executive summary.

“To support a healthy population of southern residents we may need more salmon than simply the number of fish being caught by commercial and sport fishers,” Ayres said. “We may need to open up historical habitats to boost wild salmon, such as what is being done with the Elwha River and what is proposed for the Klamath River. That may be the only way to support the historic population size of southern residents, which is ultimately the goal of recovery.”

Other co-authors are Rebecca Booth of the UW; Jennifer Hempelmann, Candice Emmons, M. Bradley Hanson and Michael Ford of the National Oceanic and Atmospheric Administration’s Northwest Fisheries Science Center; Kari Koski of Soundwatch Boater Education Program and the Whale Museum, Friday Harbor; Robin Baird of Cascadia Research Collective, Olympia; and Kelley Balcomb-Bartok, who helped get the study off the ground through collaboration with the Center for Whale Research.

The work was funded by Washington Sea Grant based at the UW, NOAA’s Northwest Fisheries Science Center, Northwest Scientific Association, UW Department of Biology and the Canadian Consulate General.