Armonk, NY and Slovakia – 09 Apr 2012: IBM today announced it has teamed with Západoslovenská energetika, a.s. (ZSE), the largest distributor and supplier of electricity in Slovakia, on a smart energy “feasibility” study that will help prepare the capital city Bratislava for electric vehicles (EVs).

Using e-mobility technology, the study will help identify the possibilities of connecting two neighboring metropolitan areas – Bratislava, Slovakia and Vienna, Austria with a “green” highway. This highway will interconnect the two cities with a network of public charging stations for electric vehicles.

This study is part of a larger pilot project – VIBRATe’ (VIenna BRATislava E-mobility), a first of its kind in Central Europe, with a goal to reduce emissions with a smarter, energy efficient transportation system. Currently, the average combustion engine produces about 45 kg of CO2 per year during the route from Vienna to Bratislava.

“The aim of the feasibility study is to identify new opportunities around e-mobility in Bratislava and maximize the market potential, in an effort to reduce emissions,” said ZSE. “By analyzing the capacity needed from the distribution network for various types of vehicle charging / recharging, Bratislava can not only implement an optimal power grid, but also address the charging concerns shared by its citizens.” 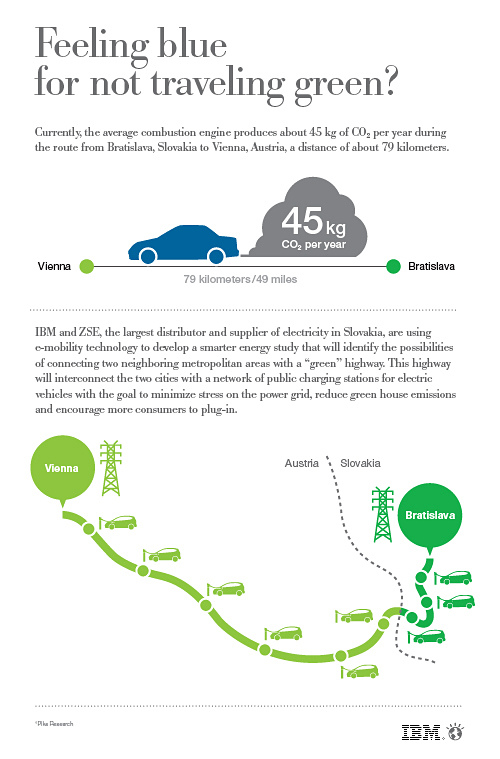 IBM Slovakia is teaming with ZSE to provide insights into various implementation scenarios and infrastructure options for charging. Together, the companies are investigating charging station locations for normal and rapid charging across the borders, as well as analyzing networking availability. This insight will allow ZSE to strategically place charging stations in areas that are convenient for consumers, without straining the distribution system, an issue caused by unpredictable charging across territories.

“Rising fuel prices and energy consumption are two major issues facing many cities around the world, these factors coupled with aging roads and infrastructures, can affect city planning, local economy, and overall community satisfaction,” said Guido Bartels, General Manager of IBM’s Global Energy and Utilities Industry. “This mobility project with ZSE tackles all of these issues. It has the potential to introduce a modern, convenient and more intelligent way for consumers to commute, which in turn may encourage more to make the shift to an electric vehicle, while reducing stress on the energy grid.”

ZSE is spearheading this project to identify alternative energy resources, drive consumer engagement and ensure the reliable distribution of electricity. Once implemented, the solution will help consumers save energy and control usage costs, while helping utilities manage power load on the energy grid during peak charging times with better insight into consumption. Additionally, energy suppliers will have the ability to store energy for use when natural sources of energy are not available.

This e-mobility study along with other projects such as Edison, EcoGrid EU and EKZ in Switzerland, demonstrates the ongoing commitment towards developing a reliable energy and transport infrastructure that supports the adoption of electric vehicles.

IBM is involved in more than 150 smart grid engagements around the world, in both mature and emerging markets. More about IBM’s vision to bring a new level of intelligence to how the world works—how every person, business, organization, government, natural system, and man-made system interacts, can be found here: https://www.ibm.com/smarterplanet

For more information about Smarter Energy at IBM, please visit: www.ibm.com/press/smarterenergy. Follow us on Twitter and LinkedIn.

About Zapadoslovenska energetika, a. s.

Zapadoslovenska energetika, a. s. (ZSE) is the Slovak energy leader. In 2002 it became a member of the E.ON Group. On 1 July 2007, electricity distribution and trade became independent services. ZSE Energia, a. s. and ZSE Distribucia, a. s. are subsidiaries fully owned by ZSE. ZSE will continue in providing customer services, including billing, to all its customers – households, business entities and strategy companies of the Slovak economy. ZSE has been active on the Slovak market since 1922.

Twitter: Follow the conversation using #EVweek @IBMSmartrEnergy during April 9-13. On April 12, from noon to 1 p.m. ET, join us @smarterplanet for a Twitter Chat to learn more about Smarter EVs. Use the hashtag #P4SP to follow along. For more information, visit: https://storify.com/smarterplanet/p4spchat-electric-vehicle-adoption.