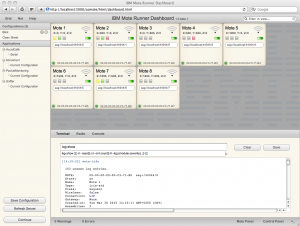 IBM Mote Runner is a software development kit to help proliferate the use of sensor networks as a means of collecting data, including climate readings, building and facility management, and water distribution, which can then be analyzed and understood to make more accurate predictions and faster decisions. In this screen capture we see the Mote Runner dashboard based on Eclipse, that provides a user-friendly platform for testing, debugging, and maintaining WSN applications. Image credit: IBM (Click image to enlarge)

IBM Mote Runner is an open software development platform that connects sensor and actuator motes within wireless sensor networks based on the IETF 6LoWPAN protocol specification. With the new Internet of Things Starter Kit, a real-time operating system is integrated in Libelium Waspmote nodes to support more that 60 different sensors available “off the shelf,” allowing developers to easily build any application on top. The Internet of Things SDK also includes the source code of the 6LoWPAN libraries so that researchers can modify and add their own algorithms and improvements.

“We have worked closely with IBM to offer a development platform that can be used for both simulation and real IPv6 sensor connectivity,” said David Gascón, CTO at Libelium. “This platform is a powerful tool for improving and testing 6LoWPAN capabilities in the context of wireless sensor networks and the Internet of Things.”

“If we can harvest the Big Data insights from all of the things connected to the Internet we can more precisely understand how our world actually works,” said Thorsten Kramp, a computer scientist at IBM Research. “By making Internet of Things application development easier, the answers to the grand challenges of our age becomes more feasible.” 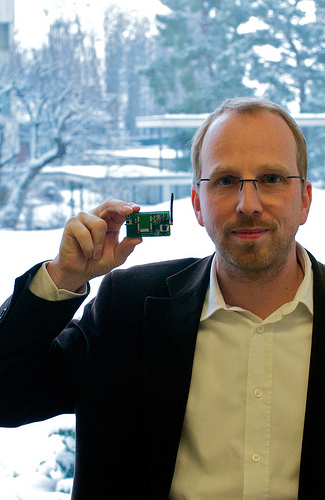 In this photo, Dr. Thorsten Kramp, research staff member and co-developer of Mote Runner at IBM Research – Zurich, holds a mote programmed with Mote Runner to detect movement and light. IBM scientists made available a free software development kit, called Mote Runner, to help proliferate the use of sensor networks as a means of collecting data, including climate readings, building and facility management, and water distribution, which can then be analyzed and understood to make more accurate predictions and faster decisions. Photo courtesy of Michael Lowry

On October 24, David Gascón of Libelium will present a session on the value of open source hardware platforms at the TSensors (Trillion Sensors) Summit at Stanford University. https://www.tsensorssummit.org.

The development environment of IBM Mote Runner comprises a complete tool chain to develop applications in high-level object-oriented languages such as Java and C#, providing support for source-level debugging and network simulations to ease application development and testing. Its web-based deployment and monitoring framework, in concert with edge and backend servers, make IBM Mote Runner an end-to-end-solution for the development, deployment, integration and visualization of wireless embedded applications. As from now, IBM Mote Runner further provides a 6LoWPAN protocol implementation for IPv6 connectivity.

A key feature of the Waspmote platform is its remarkable energy efficiency, crucial to wireless sensor networks: Waspmote counts with a sleep mode of 65uA allowing years of battery life. Other features include refinements to the hardware platform and a set of more than 60 ready-to-use sensors and actuators for a broad set of applications. Waspmote’s modular approach to radio technology allows the choice of any of the six radio protocols available—including Wi-Fi, ZigBee, 802.15.4, Bluetooth, NFC, 3G—or to switch between any two of these technologies if needed. 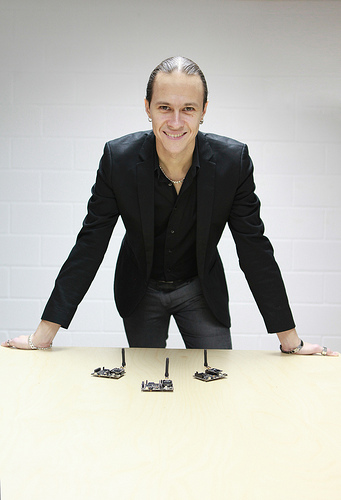 Libelium is a wireless sensor network platform provider that delivers, open-source, low-power consumption devices that are easy to program and implement for Smart Cities solutions and a wide range of M2M and sensor projects.

All of Libelium’s products are modular, horizontal and easy to integrate into third-party systems. Because of its innovative hardware integration design and horizontal approach, Libelium’s Waspmote—the company’s open-source wireless sensor platform—has the potential to be the standard, universal platform for the Internet of Things. More info at: https://www.libelium.com