The Calaveras County Jumping Frog Jubilee has entered the scientific record via a new paper in the Journal of Experimental Biology. Experienced bullfrog ‘jockeys’ at the event routinely get their frogs to jump much farther than researchers had ever measured in the lab. How? Decades of refined technique, uncommonly motivated humans and herps, and good old-fashioned large sample size.

PROVIDENCE, R.I. [Brown University] — One day, amid his decades-long study of how animals move, including how frogs jump, Brown University biologist Thomas Roberts found himself and colleague Richard Marsh puzzling over the Guinness Book of World Records. A bullfrog named Rosie the Ribiter reportedly had jumped more than 2.1 meters in a single hop at the Calaveras County Jumping Frog Jubilee in 1986, but scientific studies had never reported a bullfrog jump beyond 1.3 meters.

“It was sort of shocking; we worried about it,” Roberts said. “Maybe we were missing something but we also had a little bit of uncertainty and skepticism.”

Why worry? There are many important reasons why scientists want to know the truly maximal performance of an animal. It informs studies of how physiology and biomechanics work, such as the interplay of tendon and muscle. It also allows biologists to formulate new hypotheses about species evolution, and provides benchmarks of animal health.

What if scientists weren’t eliciting true maximal performance? Roberts’ concern about that implication lingered for years until he and colleagues sat down to watch the 2005 Justin Bookey documentary Jump about the Jubilee.

The film convinced them that Rosie’s record could be real. They decided 2009 would be the time to bring his team and their gear to Calaveras County, which Mark Twain put on the literary map in 1867 with a short story about a frog-jumping bet gone sour.

The results of the expedition are now in the scientific record books with publication online Oct. 16 in the Journal of Experimental Biology. Lead author Henry Astley recorded jumps on video as long as 2.2 meters, shattering previous scientific reports. In fact, bullfrogs at the Jubilee surpassed the old research-grade mark of 1.3 meters a striking 58 percent of the time. 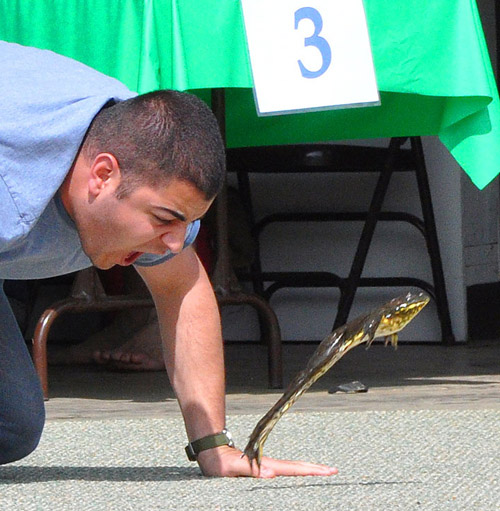 Fight or flight. Motivation — fear, in this case — appears to contribute to longer jumps. “The frog senses whether you are a scientist hoping it’s going to jump well,” said the scientist, “or a deadly reptilian-like predator who is going to eat it.” Image credit: Roberts lab/Brown University

Science at the Jubilee

Roberts and Astley originally figured they’d conduct their lab measurements at the Jubilee using the best locally sourced frogs as selected by the contest’s top frog “jockeys.” It was clear after a conference call with Sandie Lema and the rest of the Jump Committee, however, that the pros wouldn’t let the scientists distract their frogs. The Jubilee does, however, rent frogs from the same local population to fairgoers who’d like to participate.

On site the researchers quickly found that they were no more successful in jumping Calaveras frogs, albeit rentals, than the ones they were jumping in Rhode Island. Fortunately, Astley had also planned to measure jump distance by videotaping all the leaps at the Jubilee. Roberts was skeptical about measuring distance from just one camera angle, but Astley had the idea of laying out a grid on the course before the competition to calibrate the view.

Astley laid out his original grid on a sheet, but persistent winds blew that plan away. So Astley improvised.

“We had to run out to the hardware store and grab all of their pvc pipes and joints,” said Astley who is now a postdoctoral scholar at Georgia Tech University. “We were sitting there with a hacksaw in the parking lot.”

In all, Astley recorded 3,124 bullfrog jumps, providing a rich and rigorous record. 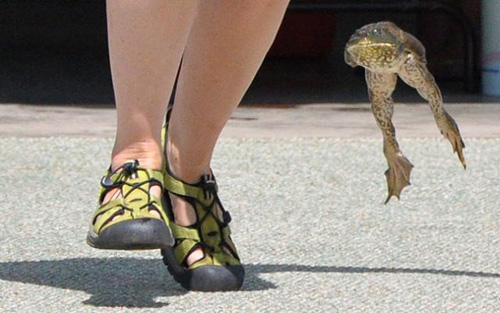 Out of the lab and onto the stage. In labs, the record frog jump was 1.3 meters. In competition, a frog named Rosie the Ribiter jumped 2.1 meters. Clearly, it was time to leave the lab and visit the celebrated jumping frogs of Calaveras County. Image credit: Brown University

Secrets of the fair

Among the insights the team gleaned was that they were not alone in their failure to get frogs to reach their full potential. The average amateur with a rental frog averaged only 1.1 meters per jump, while the professional frog jockeys averaged 1.5 meters.

The celebrated secrets of Calaveras County frog jumping perhaps lay not with the frogs themselves, but with the approaches of their human coaches. Over decades of Jubilees pro jockeys have developed techniques that seem to give them an edge, the researchers wrote in the journal.

All the frogs come from the same stock, but the jockeys capture enough of them to select better jumpers. Unlike the protagonist in Twain’s story, they don’t train the frogs, but they do keep them warm (29øC) at the contest. And while casual contestants employ many means to spur their frogs into action, the pros hew closer to a standardized ritual: rubbing their frogs’ legs, dropping them a bit to the ground at the start, and lunging after them head first with the gusto needed to inspire intense instinct.

“Several of the people mentioned to us that the frog knows the will of the jockey,” he said. “Their point was the frog senses whether you are a scientist hoping it’s going to jump well or a deadly reptilian-like predator who is going to eat it.”

But it’s not all technique and motivation, Astley notes. The mere and sheer number of frogs and jumps matter. The paper includes calculations of how many jumps are required before certain distance benchmarks became probable. Among rental frogs, for example, a sample of 50 jumps yielded a 56 percent chance of producing a jump of 1.6 meters, but a sample of 10 jumps would only yield a 14 percent chance of seeing that distance.

But with the best recorded jump of 2.2 meters now known to science, the central question remains: Is that the best a bullfrog can do?

Roberts and Astley say it’s probably at least close. A distance of about 2.2 meters matches their theoretical predictions based on frog muscle force and energy, and jump velocity and angle. Also, the researchers examined the historical record from the Jubilee and found that in the last couple of decades, the maximum reported distance has leveled off, apparently as the jockeys’ trial-and-error techniques have matured.

For Roberts’ part, he’s found the whole experience to be scientifically valuable and enlightening, as well as a whole lot of fun.

“Keep your eyes wide open and look all around for where you might find answers to your questions,” Roberts said. “Don’t get stuck in a single methodology or a single notion like ‘I do my work in the lab.’”

In addition to Astley, Roberts, and Marsh, who is affiliated with Northeastern University and Brown, other authors are E.M. Abbott and E. Azizi of the University of California–Irvine.