How the Slime Mold Gets Organized

The so-called cellular slime mold, a unicellular organism that may transition into a multicellular organism under stress, has just been found to have a tissue structure that was previously thought to exist only in more sophisticated animals. What’s more, two proteins that are needed by the slime mold to form this structure are similar to those that perform the same function in more sophistical animals.

Shortly after an animal embryo forms, it develops a single layer of cells that, shaped like a hollow ball, is empty at its center. Acting as a kind of “man behind the curtain” that directs these cells to organize into this hollow formation are several proteins that help each cell touch its neighbors but keep its top surface exposed to the formation’s empty interior. 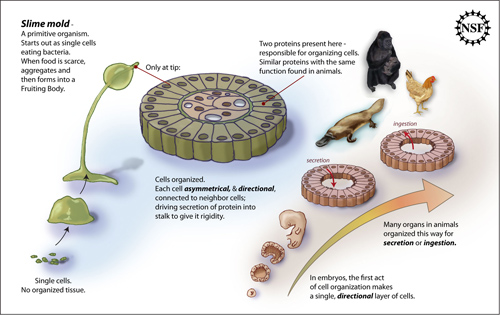 When food is scarce, the separate cells of the slime mold aggregate and form what is called a fruiting body. Cells at the tip of the fruiting body organize into a formation very similar to the epithelial layer of cells found in many organs of higher animals. Researchers found that the proteins responsible for organizing cells at the tip of the slime mold's fruiting body are genetically very similar to those that perform the same function in animal cells. Image credit: Zina Deretsky, National Science Foundation

With funding from the National Science Foundation, Daniel Dickinson, W. James Nelson and William Weis–all of Stanford University–took a careful look at the final, mature stage of slime mold development under a high-powered microscope. They report their results in the journal Science, March 11, 2011.

The slime mold spends most of its life as a single-celled organism, living in soil and preying on bacteria. However when food runs short, thousands of slime mold cells aggregate to form a mound. They then grow into a fruiting body–which is a stalk, a few millimeters tall, whose top peeks over the surface of the ground and holds spores. The researchers found that the organization and directionality of cells in this top part of the extending stalk are surprisingly similar to those of the epithelial cells of some organs of higher animals.

Dickinson and his colleagues also discovered that in order for the cells in the top of the slime mold’s stalk to organize into an epithelium, they need analogues to two of the many proteins that are needed by animal cells to organize into an epithelium. Called alpha-catenin and beta-catenin, these slime mold analogues are genetically and biochemically similar to their animal versions. And when the researchers removed these analogues from the cells of slime molds, they lost their ability to organize correctly.

In addition to requiring proteins that are similar to those required by some animal epithelial tissues, the slime mold’s epithelium tissue behaves similarly to the epithelial tissue of some animals–it is secretory. It secretes proteins that coat the stalk of the fruiting body and give it the rigidity it needs to send its spores out onto the ground in search of new food.

“We don’t know whether the ancient ancestor of slime molds and animals was actually able to form an epithelium,” says Dickinson, “but it must have had alpha-catenin and beta-catenin, and we suspect that these proteins had some role in organizing cells.”