COLUMBUS, Ohio – A new way to visualize single-cell activity in living zebrafish embryos has allowed scientists to clarify how cells line up in the right place at the right time to receive signals about the next phase of their life.

Scientists developed the imaging tool in single living cells by fusing a protein defining the cells’ cyclical behavior to a yellow fluorescent protein that allows for visualization. Zebrafish embryos are already transparent, but with this closer microscopic look at the earliest stages of life, the researchers have answered two long-standing questions about how cells cooperate to form embryonic segments that later become muscle and vertebrae.

Though these scientists are looking at the molecular “clock” that defines the timing of embryonic segmentation, the findings increase understanding of cyclical behaviors in all types of cells at many developmental stages – including problem cells that cause cancer and other diseases. Understanding how to manipulate these clocks or the signals that control them could lead to new ways to treat certain human conditions, researchers say.

Embryonic cells go through oscillating cycles of high and low signal reception in the process of making segmented tissue, and gene activation by the groups of cells must remain synchronized for the segments to form properly. One of a handful of powerful messaging systems in all vertebrates is called the Notch signaling pathway, and its precise role in this oscillation and synchronization has been a mystery until now.

In this study, the researchers confirmed that the cells must receive the Notch signal to maintain synchronization with nearby cells and form segments that will become tissue, but the cells can activate their genes in oscillating patterns with or without the signal.

“For the first time, this nails it,” said Sharon Amacher, professor of molecular genetics at Ohio State University and lead author of the study. “This provides the data that cells with disabled Notch signaling can oscillate just fine, but what they can’t do is synchronize with their neighbors.”

The imaging also allowed Amacher and colleagues to determine that cell division, called mitosis, is not a random event as was once believed. Instead, division tends to occur when neighboring cells are at a low point of gene activation for signal reception – suggesting mitosis is not as “noisy,” or potentially disruptive, as it was previously assumed. 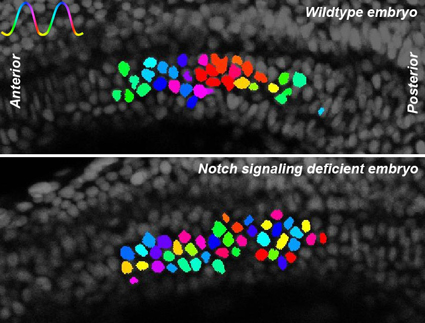 Under normal circumstances in zebrafish embryos, cells oscillate in synchrony with their neighbors as they prepare to make segments that later become muscle and vertebrae. When a color map (top left corner) is used to indicate the phase of oscillation in each cell at any fixed snapshot of time, with cool colors representing the peak of the gene activation wave and warm colors the lower levels of activation, it is evident in the top image that neighboring cells are in a similar phase, or transitioning smoothly to the next phase. However, in embryos lacking a powerful messaging system called Notch signaling, that synchrony is lost. In the bottom map, cells in mutant embryos that lack the Notch signal are oscillating, but the random assortment of colors without smooth transitions shows that Notch is required to synchronize the oscillations in neighboring cells. Images courtesy of Ohio State University

The study is published in the November issue of the journal Developmental Cell.

Amacher’s work focuses on the creation of these tissue segments, called somites, in the mesoderm of zebrafish embryos – this region gives rise to the ribs, vertebrae and muscle in all vertebrates, including humans.

“This early process of segmentation is really important for patterning a lot of subsequent developmental events – the patterning of the nervous system and the vasculature, much of that depends on this clock ensuring that early development happens properly,” Amacher said.

Unlike the well-known 24-hour Circadian clock, however, the activities of cells at the earliest stages of development can occur within a matter of minutes – which makes their clocks very challenging to study. 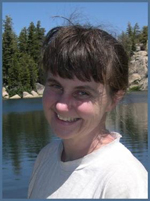 This research was aided by collaboration among biologists and physicists, including development of a powerful MATLAB-based computational analysis by co-author Paul François, assistant professor of physics at McGill University. François helped to semi-automate cell tracking, as well as to convert raw data about each cell’s phase into maps enabling more specific visualizations. He worked with Emilie Delaune, a postdoctoral fellow who constructed the imaging tool and had previously tracked cells by hand, and graduate student Nathan Shih. Amacher, Delaune and Shih conducted the research while at the University of California, Berkeley. Amacher joined the Ohio State faculty in July.

Experts in tissue segmentation liken the oscillating cycle of gene activation and de-activation that cells go through before they form somites to the wave that fans perform in a stadium. According to the segmentation clock, genes are turned on, proteins are made, proteins then inhibit gene activation, and so on, and the pattern repeats until all necessary somites are formed. Neighbor cells must be in sync with each other just as sports fans in the same section must stand and sit at the same time to effectively form a wave.

Zebrafish somites form every 30 minutes, meaning that during any one cycle of the wave, a cell is engaged in making protein for only about five minutes. To generate the imaging tool, researchers linked a yellow fluorescent protein to a cyclic protein known to have a short lifespan. The resulting short-lived fluorescent fusion protein allowed Amacher and colleagues to look at single cells along with their neighbors to observe how they stayed synchronized as they did the wave.

Researchers in this field had previously thought that the Notch signaling pathway may be needed to start the clock in these cyclic genes, though conflicting data had shown that the clock could run without the signal.

Amacher’s imaging showed that, indeed, Notch was required only to maintain synchronization, but not to start the oscillating clock. She and colleagues tested this idea by combining the imaging tool with three mutant cell types with disabled Notch signals. Cells in all three mutants could oscillate, but not in a synchronized fashion, explaining how they failed to form segments in the way that cells receiving the Notch signal could.

Defects in Notch signaling are associated with human congenital developmental disorders characterized by malformed ribs and vertebrae, suggesting this work offers insight into potential therapies to prevent these defects.

The researchers next sought to determine whether cell division interrupted the synchrony needed for creation of the segments. Mitosis, occurring among 10 to 15 percent of embryonic cells at any one time, is considered a source of biological “noise” because when cells divide, they stop activating genes. If division were happening randomly, as previously thought, instead of in a pattern, the very cell division needed for organism growth could also disrupt clock synchrony, creating problems that segmenting organisms would have to overcome.

The study showed, however, that most cells divided when their neighbors were at a low point of gene activation – at the bottom of a wave – suggesting that cell division doesn’t occur at random. The study team noted that the two daughter cells created from a fresh division are more tightly synchronized with each other than are any other cell neighbors in the area.

Under normal conditions, these two daughters resynchronize with their neighbors in short order. In embryos lacking Notch signaling, newly divided daughters appeared as a pair of tightly synchronous cells in a largely asynchronous sea, showing that oscillation could resume without the signaling pathway. Without Notch, the daughter cells gradually drifted out of synchrony, becoming like their asynchronous neighbors.

Amacher said these findings could be incorporated into models of developmental cell behavior to further advance cell biology research.

“Most of our tissues and organs are not made up of the same types of cells. They have different jobs. So you don’t want them to respond identically to every signal; you want them to have different responses,” she said. “We need to understand systems like this that help cells not only interpret the signals in their environment, but do the right thing when they get that signal.”