The Ecology of Voter Signs

Students in Mitchell Pavao-Zuckerman’s UA ecology class took to the streets of Tucson last week to lend their eyes and minds to real science.

You might have looked out your kitchen window last week to see a group of college students standing on the sidewalk clutching notepads and contemplating your front yard. If so, don’t worry – they were likely just counting the shrubbery.

The students in Mitchell Pavao-Zuckerman’s ecology class at the University of Arizona conducted surveys of six neighborhoods. From Nov. 5-9, they canvassed Tucson’s urban landscape as part of a five-year study of how socio-economic factors influence urban ecology within the city.

The project began as a new way for students to experience ecology in the lab component of the course, ECOL 302. When Zuckerman, a research scientist and assistant professor with the UA’s Biosphere 2 and the School of Natural Resources and the Environment, started teaching ecology at the UA five years ago, he wanted a way to get the students involved in real science instead of merely reading about it.

“I wanted to try to expand the thematic scope,” said Zuckerman. “It was focused on population and community-based ecology, so I was trying to bring in more ecosystem perspectives and human environment perspectives.”

“The goals were to get the students some exposure to urban ecology and what is involved when you expand out into that kind of environment rather than a more natural system,” Zuckerman explained. “It brings in the idea that there are differences in what we call socio-economic factors – basically the factors that influence what people do to make the ecosystem – and looking at how that variation translates to the ecology.”

The goal of the data, Zuckerman said, is to investigate the ecological responses to factors controlling how humans interact with or alter the landscape, such as economic affluence, whether someone is a homeowner or renter, or cultural or political ideas about how the environment should look.

The neighborhoods were selected for the study to give variation in socio-economic factors such as income, whether the homes were mostly owned or rented, and whether a neighborhood association existed. 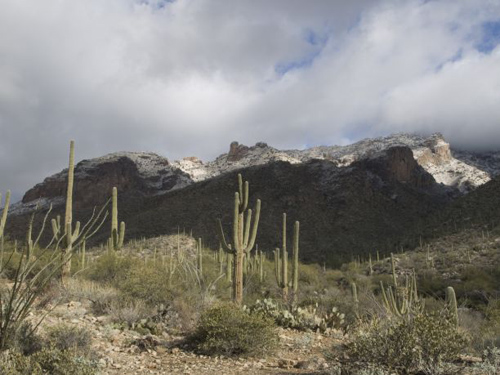 Studies in other cities have shown a relationship between median income and plant diversity and cover in the yards, Zuckerman said. The data collected by Zuckerman’s students have the potential to show how social and economic factors impact the ecological diversity right here in Tucson.

“We can see if having relatively higher incomes, or renters versus homeowners, influences the ecology differently,” Zuckerman said. “We would assume that behavior and perception and how people interact with their environment might be different given those different factors.”

The students made visual estimates of the percentage of each lot space that was taken up by building, driveway or other manmade structures, the percentage that was vegetation, what types of vegetation there were and whether that vegetation was native or non-native species. 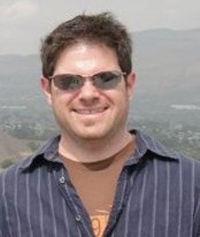 Mitchell Pavao-Zuckerman engages his students in scientific surveys to investigate how social aspects such as financial means or political beliefs influence how urban populations interact with natural landscapes in the city. (Photo by: Candace Crossey)

“It’s taking what we’ve learned in class about how organisms shape ecosystems and applying it to the real world,” said Kathryn Bryant, an ECOL 302 student who participated in the lab. “We can see how people interact together and influence their environment in urban settings.”

The students noted other signs of social factors, for example the amount of security surrounding each home such as bars on windows or fences and alarm systems. This year, they also looked for signs of the dwellers political inclinations, such as yard posts or bumper stickers.

“We think there’s potential to see trends,” Zuckerman said. “We would assume different parties have different thoughts about what the environment looks like and maybe would invest in things in different ways.”

The data the students collect might not look like much at first glance – each group of students surveyed 15 dwellings, apartments, homes or Greek houses over about three or four city blocks. But add it all up:

“We have between 140 and 180 students every year in the class,” said Zuckerman. “It’s a lot of data that comes in.” The study is now in its fifth and final year.

“Having a large number of people out collecting data helps with this kind of project because it gives you the opportunity to bring a lot more data in,” he added. “Each lab section collects data in the different neighborhoods, then I take it and summarize it for the class to interpret what’s going on across the urban landscape.”

Given guidelines for what types of data to collect, the methods are largely left up to the students, to learn to think like scientists themselves. “We ask the students for a narrative of how the data were collected,” Zuckerman said. “We can then interpret the data given how the students measured it, or we can even eliminate data from our analysis if there’s a complete mismatch in how it was measured or if there are other quality-control issues.”

Zuckerman hopes to produce a paper detailing correlations between socio-economic trends and ecological responses in the selected Tucson neighborhoods.

“We’ve seen that the neighborhoods that we assume have higher socio-economic status, that are more affluent with more homeowners, have a trend toward more native vegetation,” Zuckerman said. “That’s partly because they have more disposable income to put into those things, and at that end of the scale they’re probably more likely to be homeowners, so they’re willing, interested and able to invest in property.”

The data have also shown correlations between vegetative cover and temperatures. “The more plants that we have covering space the lower the temperatures tend to be,” he said. 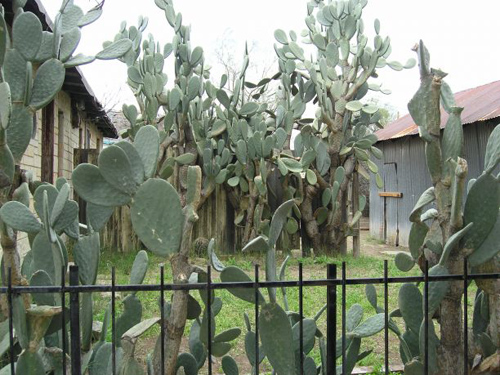 "What do landscaping preferences reveal about political beliefs?" is one of the questions the research project tries to address. (Photo by : D. Stolte/UANews)

As for the bird count data: “It’s hard to interpret,” Zuckerman said, “Because our class is not made up of bird identification experts. But generally it looks like there are more native bird species in the neighborhoods that have more native plants.”

“We’ll be able to look at how the trends either hold up or don’t through the years of data collection,” Zuckerman added. But the main point, he said, is getting the students to think about and take part in actual science.

“There is more relevance to this particular lab than for a classroom or field activity,” said Eugenio Larios, a graduate student in the Venable lab in the department of ecology and evolutionary biology, and the head teaching assistant for ECOL 302. “It’s engaging the students in a project that now has years of data.”

“Participating in science is an easier way to learn about it, I think,” Zuckerman said. “Instead of sitting and reading about it, you’re actually doing it.”