After more than three years of monitoring the towering granite cliffs of Yosemite National Park, scientists have new insights into a potentially important mechanism that can trigger rockfalls in the park. Although many conditions can trigger rockfalls, some rockfalls are more likely to happen in the hottest part of the day, during the hottest part of the year.

Rockfalls in Yosemite are common and part of the natural process of erosion, but they also pose hazards to park visitors. Improved understanding of this thermal triggering mechanism may assist the National Park Service in managing rockfall hazards in the park. 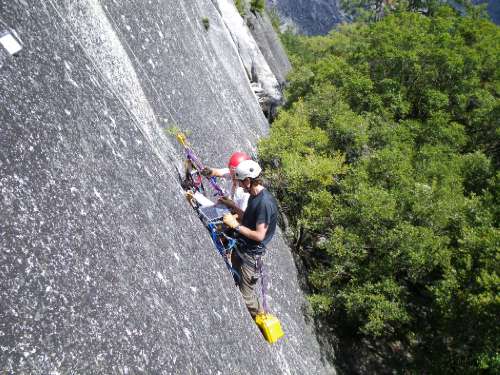 To explain this phenomenon, U.S. Geological Survey and NPS geologists placed sensitive deformation and temperature gauges in a crack behind a large, partially detached slab of granite clinging to a Yosemite Valley cliff.  The scientists found that daily heating and cooling of the rock surface caused the crack to open and close by nearly half an inch. The resulting stress can cause such cracks to grow, destabilizing the rock slabs to the point where they fall, in a process called exfoliation.

According to Brian Collins, USGS geotechnical engineer and coauthor of the study, “Our research provides clear evidence that thermal effects can move large slabs of rock and that these movements, over time, can lead to rock falls.”

“Summertime rockfalls have been something of a mystery,” said Greg Stock, Yosemite park geologist and coauthor of the study. “With this work we now have a plausible explanation for why they happen.”

The full report, “Rockfall triggering by cyclic thermal stressing of exfoliation fractures,” is published in the current issue of the journal Nature Geoscience, and is available online.