An interdisciplinary team of researchers led by University of Delaware professors Wei-Jun Cai and Mark Warner has successfully measured both pH and carbonate ion concentration directly inside the calcifying fluid found in coral, an important development in the study of how ocean acidification will affect marine calcifying organisms such as corals and shellfish.

According to Cai, Mary A.S. Lighthipe Chair of Earth, Ocean, and Environment, the research team, which includes colleagues from University of Georgia and Ohio State University, is the first to measure carbonate ion concentration inside coral using a specialized carbonate sensor developed in Cai’s laboratory. 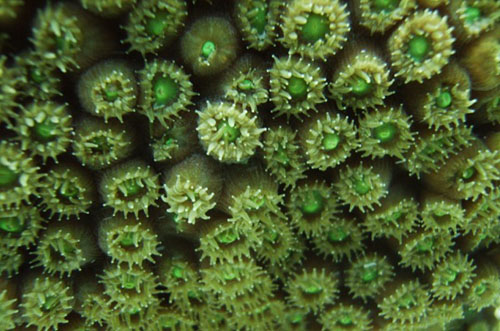 The researchers reported their findings in a paper published in Nature Communications on April 4.

Ocean acidification (OA) is the ongoing decrease in pH in the global ocean due to the absorption of excess carbon dioxide from the atmosphere. Scientists know that OA impacts shell formation and development in marine calcifying organisms, but they don’t know exactly why.

“With Prof. Cai’s microelectrode we now have the ability to probe through the coral’s stomach tissue and into the calcifying fluid next to the rock of the skeleton, and capture data about what the chemistry is like where calcification occurs,” explained Warner, a marine science professor at UD. 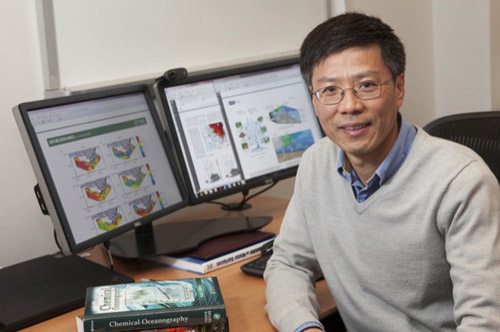 This is very important, Warner continued, because while scientists know how OA is changing the seawater chemistry, they don’t yet understand how the chemistry of the fluid deep inside the coral — where coral make their calcium carbonate skeletons — is changing.

“You need two parameters to completely understand a carbonate system. If you only measure pH, as has been done historically, we can only guess what the other dissolved inorganic carbon parameters may be,” said Cai.

Measurements were worth the wait

A special chemical inside the carbonate sensor was designed to move carbonate ions across a membrane, creating a voltage difference that can be measured and used to quantify the carbonate concentration.

The work was challenging, and required many tries and great patience before they were successful. “If you push too hard, the electrode misses the fluid and breaks at the hard skeleton,” Cai said.

The researchers’ results confirmed what other scientists have measured before – the pH inside the coral’s calcifying layer is high. This finding supports the idea that coral are equipped with a proton pump that force protons away from this site in order to regulate pH and allow calcification to occur. 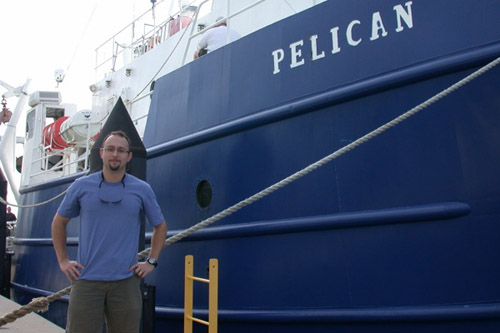 “Our findings show it is similar to seawater or even slightly lower than seawater,” Cai said.

The researchers hypothesize the reason is that the coral is rapidly using the carbon to make their skeletons. One hypothesis with OA is that a coral has to work harder to keep making the same amount of skeleton when there is a change in pH.

“At least for the corals we’ve tested it on, when we back calculate the chemistry in this area, our findings indicate they may not have to work quite as hard as we thought. The work definitely opens up the scope of study to ask more questions related to ocean acidification and energy demand and how corals can potentially resist these kinds of stressors,” said Warner.

“It also could explain why the calcification rates of many species of corals are not affected by ocean acidification,” said co-author Andréa Grottoli at Ohio State University.

Now that the scientists have overcome the technical difficulties associated with taking these complicated measurements inside coral, the next step is to collect measurements under different conditions and from other species of corals. For example, Cai envisions taking measurements under various ocean acidification conditions, light conditions or temperatures, and while exposing the coral to different nutrients or environmental stressors.

“We have a long way to go,” he said, “but I am confident that this work will help the scientific community to look at coral calcification mechanisms somewhat differently from the approaches we’ve seen in the past,” Cai said.

It may also help scientists better understand carbon delivery — how carbon is moving inside the coral — and how external changes in pH may affect the coral’s biochemistry.

“These tools and the results we obtained with them provided exciting new insight into calcification mechanisms and we are currently working to incorporate these findings into models of coral carbon processing,” said Brian Hopkinson, a collaborator at the University of Georgia.

“Some of the premises that scientists have been working under regarding OA are predicated on what’s happening to the chemistry of the seawater, but the coral is changing these concentrations biologically as well. This is the kind of tool that will help us figure out what coral are doing differently,” added Warner.

This work was funded in part by two awards from the National Science Foundation.

About the research team