A new Star Trek app for Windows 8 and Windows Phone kicked off an unprecedented cross-company partnership to promote “Star Trek Into Darkness,” the new film from Paramount Pictures. Star Trek movie-themed content will materialize across Microsoft’s consumer products and services leading up the May 16 release of the highly anticipated new movie.

And that’s when executives from Paramount, on behalf of director J.J. Abrams’ sequel to the 2009 wildly popular reimagining of the Star Trek film franchise, set upon a course to seek Microsoft as a marketing partner for the movie.

“We knew that linking with all the new, high-technology products and services Microsoft offers consumers would be the perfect way to build excitement for this latest Star Trek movie adventure,” says LeeAnne Stables, executive vice president of Worldwide Marketing Partnerships at Paramount Pictures. “Working with all the teams across Microsoft has been an incredible experience for us.”

“Microsoft speaks to Trekkers and vice versa,” Buckmaster says. “Our developers’ deep love for the Star Trek lore and interest in the J.J. Abrams reboot of the film franchise helped bring together all of Microsoft’s brands (in a compelling way) for the first time.” 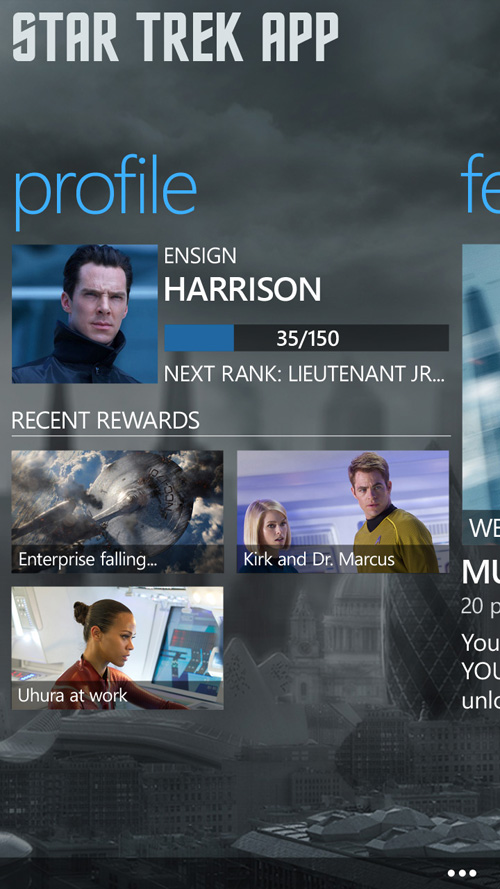 The partnership officially jumped into warp drive earlier this month with the release of a Star Trek app for Windows Phone and Windows 8. The app will enable fans to purchase tickets via Fandango for the movie’s advance screening in IMAX on May 15, one day before the official theatrical release. Fans can also get news about the film, perform missions as a member of Starfleet Academy, enter sweepstakes and watch exclusive behind-the-scenes videos.

Star Trek will continue to materialize across Microsoft’s products in the days leading up to the film’s debut. Curious how to say “beam me up” in Klingon? Microsoft today added Klingon to the list of supported languages on the Bing Translator. Paramount connected Bing’s developers with CBS (long-term stewards of all-things Star Trek), and in turn, the professor who created the fictional Klingon language. They worked closely to feed enough Klingon root words into the program to be able to translate just about any phrase. Plus, Bing will have a special homage to the Star Trek franchise on its home page to celebrate the new film, along with a few surprises up its sleeve if you enter the right phrase into the search engine.

For fans looking for deeper Star Trek features, Xbox SmartGlass will provide a rich second-screen experience that gives people access to behind-the-scenes footage from the 2009 film when they watch the movie on Xbox Video on their Xbox 360. It will also provide “Star Trek Into Darkness”exclusive trailers, videos, and special promotional offers. “Star Trek: The Video Game” is available for Xbox 360 and Windows PCs now. 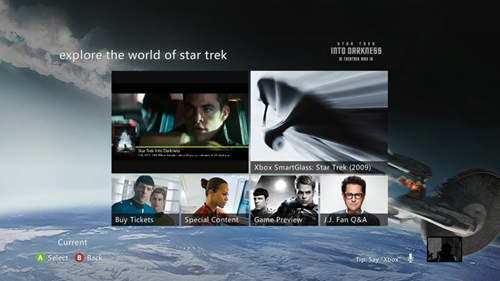 Xbox SmartGlass will provide a rich second screen experience that gives people access to behind-the-scenes footage from the 2009 film when they watch the movie on Xbox Video on their Xbox 360. It will also provide “Star Trek Into Darkness” exclusive trailers, videos and special promotional offers. Image credit: Microsoft

Last month, as part of the launch of the company’s first-ever Xbox Video Awards, Microsoft invited Xbox LIVE users in the U.S., Canada and Australia to submit their questions for J.J. Abrams through Facebook and Twitter for a chance to have him answer them via video on Xbox LIVE when the Xbox Video Award winners were announced.

The experience also extends beyond the screen. Actors from the new film will beam into Microsoft Store locations in Toronto, San Francisco, Seattle and Los Angeles leading up to the premiere, handing out tickets to advance screenings.

‘Looking out toward the future’

The partnership started in December 2012 when Paramount hosted Microsoft execs for a tour of J.J. Abrams’ Bad Robot production facility to see early film footage and meet the director. Within days a Paramount team was visiting the Microsoft campus to discuss the opportunity in detail. They thought a collaboration would be natural: Star Trek and Microsoft are both iconic, forward-thinking, technology-loving brands with intensely loyal fans. Together, they could create an impactful pop culture event that would “have people buzzing until stardate 2055.” 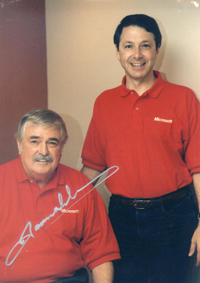 Buckmaster and her colleague Alison Pember were sold. Now they just had to get all of Microsoft’s consumer brands to agree to a cross-company campaign, which turned out not to be too hard. “Turns out love for the Star Trek franchise runs deep at Microsoft,” Buckmaster quips. Developers quickly got on board with the campaign, viewing it as a passion project.

While there is no shortage of Star Trek fans at Microsoft, the biggest just might be Rick Rashid, the company’s chief research officer.

Rashid is a well-known Trekker. His office at Microsoft is crammed with Star Trek paraphernalia, most of it gifts he’s received over the years: props, posters, unproduced television scripts. The crown jewel is a photo with James Doohan, aka Scotty, with whom he shared a stage years ago at a special Microsoft event.

A sci-fi fan since childhood, Rashid was hooked from the moment he watched his first Star Trek episode back in high school. “The whole idea of looking out toward the future and constantly trying to discover new things — those themes have always appealed to me,” he says.

They still resonate today at his day job. Some of the work Rashid oversees at Microsoft Research (MSR) seems straight out of Star Trek. Sometimes, it is. A few months ago, MSR researchers with backgrounds in computer vision and machine learning came up with a way to make the elevator in their building automatically open whenever someone walks up to it — just like the doors on the Starship Enterprise, Rashid says.

What technology is he still waiting to see?

“I’m really looking forward to the teleporter,” Rashid says with a laugh. “We’ve got some researchers doing quantum computing in Santa Barbara, but we’re still a long way away from teleportation. For someone like me who travels all the time, boy that would just make life a lot better.”

Since the first Star Trek movie, Rashid has always taken the people who work for him out to the theater. In 1979, that was two graduate students. Next month he’ll take more than 500 MSR colleagues and their friends and family out to see “Star Trek Into Darkness.”

He’ll be in his Captain Picard costume, naturally.

Rashid is eagerly awaiting the film. And he’s happy that Abrams has helped expand the franchise’s audience beyond just Trekkers. But he hopes the new fans don’t look askance at the more passionate moviegoers.

“If all you’re paying attention to is people in costumes and pointy ears, you’re missing the point,” he says. “The enthusiasm for Star Trek over the years has really been as much about the enthusiasm for a positive future, for the opportunity for a better world, and the excitement of discovery. If people focus on that, it’s great.”