In the last few decades, glaciers at the edge of the icy continent of Antarctica have been thinning, and research has shown the rate of thinning has accelerated and contributed significantly to sea level rise.

New ice core research suggests that, while the changes are dramatic, they cannot be attributed with confidence to human-caused global warming, said Eric Steig, a University of Washington professor of Earth and space sciences.

Previous work by Steig has shown that rapid thinning of Antarctic glaciers was accompanied by rapid warming and changes in atmospheric circulation near the coast. His research with Qinghua Ding, a UW research associate, showed that the majority of Antarctic warming came during the 1990s in response to El Niño conditions in the tropical Pacific Ocean.

Their new research suggests the ’90s were not greatly different from some other decades – such as the 1830s and 1940s – that also showed marked temperature spikes.

“If we could look back at this region of Antarctica in the 1940s and 1830s, we would find that the regional climate would look a lot like it does today, and I think we also would find the glaciers retreating much as they are today,” said Steig, lead author of a paper on the findings published online April 14 in Nature Geoscience. 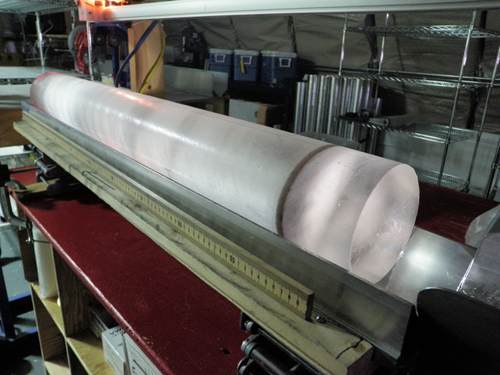 The researchers’ results are based on their analysis of a new ice core from the West Antarctic Ice Sheet Divide that goes back 2,000 years, along with a number of other ice core records going back about 200 years. They found that during that time there were several decades that exhibited similar climate patterns as the 1990s.

The most prominent of these in the last 200 years – the 1940s and the 1830s – were also periods of unusual El Niño activity like the 1990s. The implication, Steig said, is that rapid ice loss from Antarctica observed in the last few decades, particularly the ’90s, “may not be all that unusual.”

The same is not true for the Antarctic Peninsula, the part of the continent closer to South America, where rapid ice loss has been even more dramatic and where the changes are almost certainly a result of human-caused warming, Steig said.

But in the area where the new research was focused, the West Antarctic Ice Sheet, it is more difficult to detect the evidence of human-caused climate change. While changes in recent decades have been unusual and at the “upper bound of normal,” Steig said, they cannot be considered exceptional.

“The magnitude of unforced natural variability is very big in this area,” Steig said, “and that actually prevents us from answering the questions, ‘Is what we have been observing exceptional? Is this going to continue?’”

He said what happens to the West Antarctic Ice Sheet in the next few decades will depend greatly on what happens in the tropics.

The West Antarctic Ice Sheet is made up of layers of ice, greatly compressed, that correspond with a given year’s precipitation. Similar to tree rings, evidence preserved in each layer of ice can provide climate information for a specific time in the past at the site where the ice core was taken.

In this case, the researchers detected elevated levels of the isotope oxygen 18 in comparison with the more commonly found oxygen 16. Higher levels of oxygen 18 generally indicate higher air temperatures.

Levels of oxygen 18 in ice core samples from the 1990s were more elevated than for any other time in the last 200 years, but were very similar to levels reached during some earlier decades.