COLUMBIA, Mo. – A business may build a better reputation as a good corporate citizen by donating $100,000 to ten charities, as opposed to $1 million to one charity, suggested University of Missouri anthropologist Shane Macfarlan. Contrary to earlier assumptions in theoretical biology, Macfarlan’s research found that helping a greater number of people builds a positive reputation more than helping a few people many times. The results of this research can offer guidance to businesses and politicians on how to improve their public images.

“Good reputations are good business. For example, buyers tend to purchase from merchants with numerous positive ratings on internet-based commerce websites, such as Amazon and eBay,” said Shane Macfarlan, post-doctoral anthropology researcher in MU’s College of Arts and Science. “Beyond the realm of commerce, the power of a positive reputation may have influenced the evolution of language and cooperation in our species. In our study, we found that an individual’s reputation improves more after helping a greater number of people compared to performing a greater number of helpful acts for fewer people.”

For example, a politician hoping for reelection may wish to back legislation that benefits many people, as opposed to giving tremendous help to a smaller group, noted Macfarlan. Political scientists recently contacted Macfarlan about applying his findings to public figures and their attempts to build positive reputations.

In his research, Macfarlan studied the work habits and reputations of men in a remote village on the Caribbean island of Dominica. The isolation of the village reduced outside influences on reputation and allowed the study to focus solely on the effects of specific behaviors on social standing. 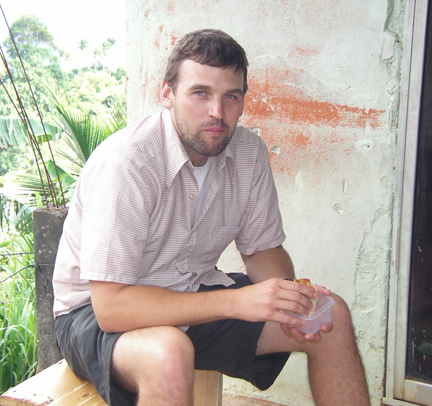 Shane Macfarlan, post-doctoral anthropology researcher in MU’s College of Arts and Science. Macfarlan found that helping a greater number of people had a larger influence on improving one’s reputation than the total number of helpful acts. Image credit: University of Missouri

On the island of Dominica, the men were all involved in the production of bay oil, a tree leaf extract used to make cosmetics by companies such as Burt’s Bees. Bay oil production is labor intensive, so village men require assistance from each other. Macfarlan identified why some men attracted both many volunteer helpers and the respect of their peers, while other men had few helpers and little regard in the community.

“Helping numerous other men led to individuals achieving higher regard among their peers,” Macfarlan said. “However, other men, who helped a smaller number of people, would end up with a worse reputation, although both men performed a similar total number of helping acts. Moreover, men with the best reputations received a greater amount of assistance from a greater number of people when they needed it most, whether it was in agricultural production or assistance after disasters, such as hurricanes.”

Previously, researchers creating computer models of reputation-based cooperation had only considered the effect of the number of acts of cooperation on reputations, not the breadth of cooperation. Macfarlan’s real-world observations of how reputations are built could lead to improvements in modeling human social interaction.

The study, “Cooperative Behavior and Pro-social Reputation Dynamics in a Dominican Village,” was published in Proceedings of the Royal Society B. Proceedings B is the Royal Society’s flagship biological research journal, dedicated to the rapid publication and broad dissemination of high-quality research papers, reviews and comment and reply papers. The scope of the journal is diverse and is especially strong in organismal biology.