Chemists Work to Desalt the Ocean for Drinking Water, One Nanoliter at a Time

By creating a small electrical field that removes salts from seawater, chemists at The University of Texas at Austin and the University of Marburg in Germany have introduced a new method for the desalination of seawater that consumes less energy and is dramatically simpler than conventional techniques. The new method requires so little energy that it can run on a store-bought battery.

The process evades the problems confronting current desalination methods by eliminating the need for a membrane and by separating salt from water at a microscale.

The technique, called electrochemically mediated seawater desalination, was described last week in the journal Angewandte Chemie. The research team was led by Richard Crooks of The University of Texas at Austin and Ulrich Tallarek of the University of Marburg. It’s patent-pending and is in commercial development by startup company Okeanos Technologies.

“The availability of water for drinking and crop irrigation is one of the most basic requirements for maintaining and improving human health,” said Crooks, the Robert A. Welch Chair in Chemistry in the College of Natural Sciences. “Seawater desalination is one way to address this need, but most current methods for desalinating water rely on expensive and easily contaminated membranes. The membrane-free method we’ve developed still needs to be refined and scaled up, but if we can succeed at that, then one day it might be possible to provide fresh water on a massive scale using a simple, even portable, system.” 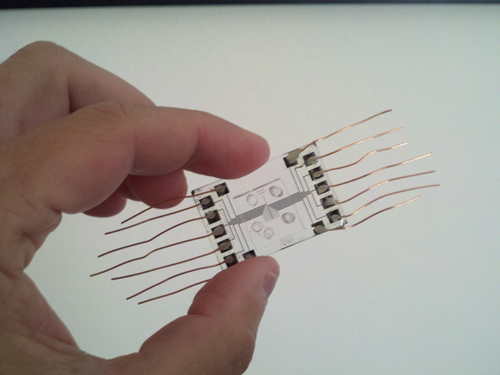 This new method holds particular promise for the water-stressed areas in which about a third of the planet’s inhabitants live. Many of these regions have access to abundant seawater but not to the energy infrastructure or money necessary to desalt water using conventional technology. As a result, millions of deaths per year in these regions are attributed to water-related causes.

“People are dying because of a lack of freshwater,” said Tony Frudakis, founder and CEO of Okeanos Technologies. “And they’ll continue to do so until there is some kind of breakthrough, and that is what we are hoping our technology will represent.”

To achieve desalination, the researchers apply a small voltage (3.0 volts) to a plastic chip filled with seawater. The chip contains a microchannel with two branches. At the junction of the channel an embedded electrode neutralizes some of the chloride ions in seawater to create an “ion depletion zone” that increases the local electric field compared with the rest of the channel. This change in the electric field is sufficient to redirect salts into one branch, allowing desalinated water to pass through the other branch.

“The neutralization reaction occurring at the electrode is key to removing the salts in seawater,” said Kyle Knust, a graduate student in Crooks’ lab and first author on the paper.

The left panel shows the salt (which is tagged with a fluorescent tracer) flowing upward after a voltage is applied by an electrode (the dark rectangle) jutting into the channel at just the point where it branches. In the right panel no voltage is being applied. Image credit: The University of Texas at Austin

Like a troll at the foot of the bridge, the ion depletion zone prevents salt from passing through, resulting in the production of freshwater.

“This was a proof of principle,” said Knust. “We’ve made comparable performance improvements while developing other applications based on the formation of an ion depletion zone. That suggests that 99 percent desalination is not beyond our reach.”

The other major challenge is to scale up the process. Right now the microchannels, about the size of a human hair, produce about 40 nanoliters of desalted water per minute. To make this technique practical for individual or communal use, a device would have to produce liters of water per day. The authors are confident that this can be achieved as well.

If these engineering challenges are surmounted, they foresee a future in which the technology is deployed at different scales to meet different needs.

“You could build a disaster relief array or a municipal-scale unit,” said Frudakis. “Okeanos has even contemplated building a small system that would look like a Coke machine and would operate in a standalone fashion to produce enough water for a small village.”