Both parents and health care providers wonder: What is the best way to get through to adolescents about the dangers of risky sexual behavior? Research by investigators from Yale School of Medicine and the Yale play2PREVENT Lab finds that both positive and negative messaging may influence adolescent behavior. The study is published online in the journal Health Education Research.

The researchers write that 48% of high school students have had sex, and 6% had sex by the age of 13. Beginning sexual activity at an early age increases the risk of multiple partners, unwanted pregnancy, and sexually transmitted infections. A full half of all new sexually transmitted infections in the United States occur in individuals aged 15 to 25. 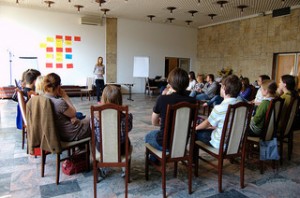 Among adults, existing research has found that positive-framed messaging is more effective in prevention efforts. In this exploratory pilot study, researchers examined the impact of different types of HIV prevention messages on adolescents aged 10 to 14. The goal was to determine which was better at persuading them to delay the initiation of sexual activity.

The team tested both positive or gain-framed messages (“Waiting to have sex until you are older is the safest and most effective way to avoid getting a sexually transmitted infection and to prevent pregnancy”), and a negative or loss-framed message with the same content (“Sex at a young age can lead to sexually transmitted infections, HIV, or pregnancy, which can prevent you from reaching your goals”).

The study found that a majority of adolescents preferred a roughly equal combination of gain- and loss-framed images and messages, adding to previously published literature that suggested gain-framed content might be more influential in prevention efforts. Notably, the vast majority of the message framing literature involves adults.

“Our findings provide important formative data for public health and medical providers who are trying to effectively communicate health risks to adolescents. Our data suggest that scare tactics, or loss-framed messages, may need to be balanced with some positive content,” said first author Dr. Deepa Camenga, pediatrics instructor at Yale School of Medicine.

“These findings speak to the need for us to carefully consider our audience when we apply message-framing principles,” added senior author Lindsay Duncan, assistant professor at McGill University. “The techniques that work to promote healthy behavior in adults may not be the same as those that work best for adolescents.”

The authors recommend that future research should determine how adolescents’ perceived risk of initiating behavior affects their actual behavior. “Understanding how to motivate sexual risk reduction behaviors is a key step towards improving health outcomes among adolescents,” they write.

This study was supported by grants from the Eunice Kennedy Shriver National Institute of Child Health and Human Development (R01 HD062080-01) and the Robert Wood Johnson Foundation Clinical Scholars Program.