When it comes to mining for copper and gold, prospectors will move mountains to make it happen. As in, physically dig up the rock, extract the precious metals and move the debris elsewhere.

In the chilly high altitudes of the Andes Mountains, however, what may look like part of a mountain can in fact be a huge, frozen block of rock fragments and ice. When some of that ice melts in the spring, these so-called “rock glaciers” become a valuable source of water for local populations.

A scientific team including researchers from the University of Delaware trekked to the Andes in Argentina this month to learn more about rock glacier dynamics. They are estimating how much ice is locked inside rock glaciers where several new mines are being developed and how far the formations move each year.

The effort will aid the mining industry and government officials in determining the potential environmental impacts of disrupting the geological features.

“Mining companies are very concerned about altering or damaging any natural icy landscapes because there is so little water coming out of the high, dry Andes,” said Michael O’Neal, associate professor of geological sciences in UD’s College of Earth, Ocean, and Environment. 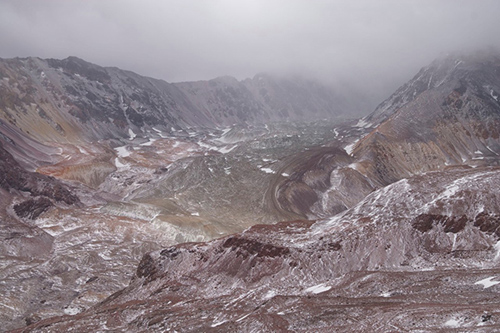 UD researchers traveled to the Andes in Argentina this month to study rock glaciers. Photo courtesy of Michael O’Neal

Rock glaciers form gradually as mountains erode and pieces of rock crumble downwards. Snow blankets the rocks and then melts when temperatures rise, causing water to seep in between crevices before refreezing. Like regular glaciers, rock glaciers move slowly under their own weight and seasonal melt. The scientists will compare data from year to year to track that movement.

“If they truly are active and flowing, we’ll see it when we measure their position,” O’Neal said.

If not, the rock glaciers may be inactive relics of a glacial advance thousands of years ago and no longer contribute to annual water flow. 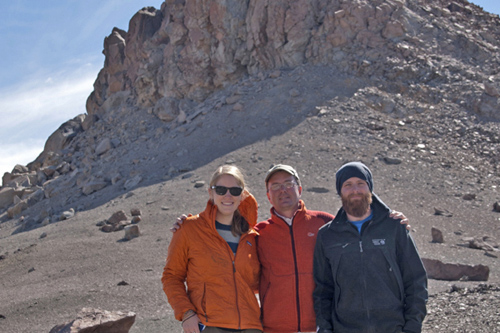 The scientists use unobtrusive methods to study the icy landscape, avoiding potentially damaging approaches like drilling. In addition to 3-D modeling, Schreiber is burying temperature sensors and collecting data regarding annual snow cover to map out the spatial distribution of permanently frozen ground throughout the region.

Claudio Berti, a visiting professor at UD from Lehigh University, is using radar data from satellites and computational techniques to gauge changes on surfaces, detecting shifts as small as a few millimeters. Other researchers involved in the project are measuring the water that trickles out of the rock glaciers.

“If you look at the chemicals coming out with the water from these rock glaciers, it should tell you a lot about how long that water’s been in there reacting with the rock,” O’Neal said.

The multi-year research is supported by international mining operations and overseen by a U.S.-based environmental and geologic consulting company. In Argentina, mining companies are required by law to disclose potential environmental impacts of planned operations, which can yield billions of dollars worth of precious metals.

Just across the border in Chile, for example, a massive copper mine is one of the largest in the world. Giving a virtual tour of the landscape using Google Earth, O’Neal and Berti can point out where a huge cavity and snaking roads mark the location.

“It used to be a mountain, and now it’s a gigantic hole,” Berti said. 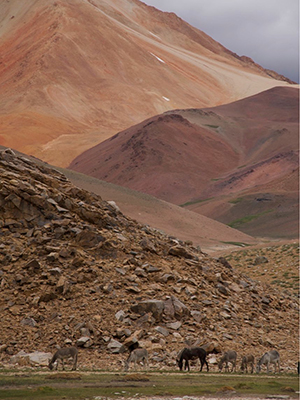 Mules graze near a rock glacier in the Andes. Photo courtesy of Michael O’Neal

Argentina is ahead of the curve compared with the rest of the world in terms of protecting glacier and glacier-like landforms, O’Neal said. While mining could provide a huge economic stimulus, unintended changes to water resources could impact agriculture and wine production. Already, there is not much water available for people living in the valleys.

Once the scientific results are in, it will be up to the miners and regulators to iron out how to move forward. As compensation for the removal of an icy pass, for example, governments can require that a miner build a well for groundwater or work around the environmentally protected structures.

“They’ll have to make their own decisions from the scientific evidence,” O’Neal said.

The college brings the latest advances in technology to bear on both teaching and conducting ocean, earth and atmospheric research. Current focus areas are ecosystem health and society, environmental observing and forecasting, and marine renewable energy and sustainability. CEOE comprises the Department of Geological Sciences, the Department of Geography and the School of Marine Science and Policy.