Heat Therapy Could Be New Treatment for Parasitic Skin Disease

COLUMBUS, Ohio – Scientists are hoping that heat therapy could eventually replace a complex drug regimen as the first-line treatment of a parasitic skin infection common in tropical and subtropical regions of the world.

The researchers successfully treated the skin infection with heat therapy in two patients whose immune systems were deficient, which lowered their bodies’ ability to respond to medication. Both patients have remained free of the parasitic disease, called cutaneous leishmaniasis, for more than a year since receiving the heat treatment.

That long-term effectiveness, especially in people with compromised immune systems, makes this one-time application of heat to skin lesions an appealing alternative to the conventional treatment for the infection — a series of about 20 consecutive daily drug injections that is rife with compliance problems, researchers say.

The case report about these treatments is published in the Feb. 12 issue of The Lancet. 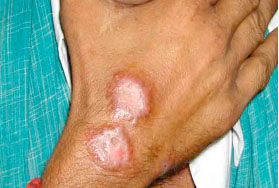 Lesions on the patient’s hand before the start of heat therapy. Photo credit: The Lancet

“The fact that this treatment worked in immune-compromised people over the long term means it should work in healthy people, and could become the first-line treatment,” said

Additional research on multiple patients would be required to substantiate the heat treatment’s effectiveness and confirm its potential to replace drug therapy, he noted.

“If this same level of efficacy can be proved in the long term, it could revolutionize the management of cutaneous leishmaniasis in the world,” he said.

This heat therapy worked on the form of the infection that attacks the skin, which is characterized by sores of various sizes that may or may not be painful. An estimated 1.5 million new cases of cutaneous leishmaniasis are diagnosed each year worldwide, according to the U.S. Centers for Disease Control and Prevention (CDC). 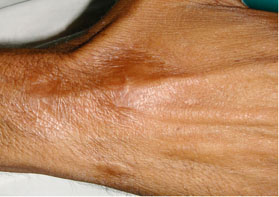 This therapy would not apply to the less-common visceral form of the disease that affects internal organs, or the even rarer form, mucosal leishmaniasis, which affects the mouth, nose and throat. All forms of the disease are caused by infection with Leishmania parasites, which are transmitted by the bite of infected sand flies.

According to the CDC, more than 90 percent of the cases of cutaneous leishmaniasis occur in parts of Afghanistan, Algeria, Iran, Iraq, Saudi Arabia, Syria, Brazil and Peru. The disease is rare in the United States, but it is showing up in border states and also affects U.S. soldiers deployed to the Middle East.

Satoskar and colleagues described the case of a 34-year-old man in Rajasthan, India, who was diagnosed in January 2009 with cutaneous leishmaniasis and HIV infection. In addition to treating his HIV, clinicians gave him twice-weekly injections of sodium stibogluconate, a commonly used compound for the skin disease, for six weeks. After 24 weeks, the leishmaniasis sores were still present.

At this point, the clinicians treated each skin sore with a single application of radio-frequency-induced heat therapy for 60 seconds under local anesthesia. He was prescribed an oral anti-inflammatory and antibiotic skin cream to treat wounds caused by the heat. The parasitic sores responded to the heat therapy, completely healing within 12 weeks. A year later, minor scars were visible where the treatments had occurred.

antimonials, must be given by injection and can cause damage to veins and other unpleasant symptoms, such as nausea, vomiting or diarrhea, muscle or joint pain, and dizziness. These side effects, combined with the need to receive daily shots for three weeks, lead to poor patient compliance – which can then allow the parasites to develop resistance to the drugs.

Previous studies have shown that radio-frequency-induced heat can be effective in treating this skin disorder, but it had not been tested before in a patient with a compromised immune system, Satoskar said. “Patients need a normal immune system for the leishmaniasis drugs to work,” he said.

He added that patients in previous studies also had not been followed for as long as a year.

The second HIV-infected patient described briefly in the report had cutaneous leishmaniasis sores that did not respond to the conventional sodium stibogluconate regimen or a follow-up antibiotic treatment. The 28-year-old man also remained disease-free one year after he received radio-frequency-induced heat therapy.

The equipment used for heat therapy currently costs approximately $14,000, and is portable so it could be used in rural environments. “That way, you don’t need patients to come to a clinic, making this much easier to use in the field,” Satoskar said.

He predicted that if the treatment were widely adopted, the cost of the equipment would drop.

Satoskar has received a $2.7 million grant from the National Institutes of Health to conduct additional research in an effort to identify new drug therapies for leishmaniasis.

Co-authors of this case report include Neha Prasad, Bhikam Ghiya and Ram Bumb of the Sardar Patel Medical College, Bikaner, in Rajasthan, India; Himanshu Kaushal and Poonam Salotra of the Safdarjung Hospital Campus in New Delhi, India; and Anjali Satoskar and Claudio Lezama-Davila of Ohio State’s departments of Pathology and Microbiology.

This work was supported by a grant from Thermosurgery Inc. based in Phoenix, which manufactures the radio-frequency generator used in the study. Satoskar has no affiliation with the company beyond its support of this research.