Almost 600 million years ago, before the rapid evolution of life forms known as the Cambrian explosion, a community of seaweeds and worm-like animals lived in a quiet deep-water niche near what is now Lantian, a small village in south China.

Then they simply died, leaving some 3,000 nearly pristine fossils preserved between beds of black shale deposited in oxygen-free and unbreathable waters.

Scientists from the Chinese Academy of Sciences, Virginia Tech in the United States and Northwest University in Xi’an, China report the discovery of the fossils in this week’s issue of the journal Nature.

In addition to ancient versions of algae and worms, the Lantian biota–named for its location–included macrofossils with complex and puzzling structures.

In all, scientists have identified some 15 species at the site. 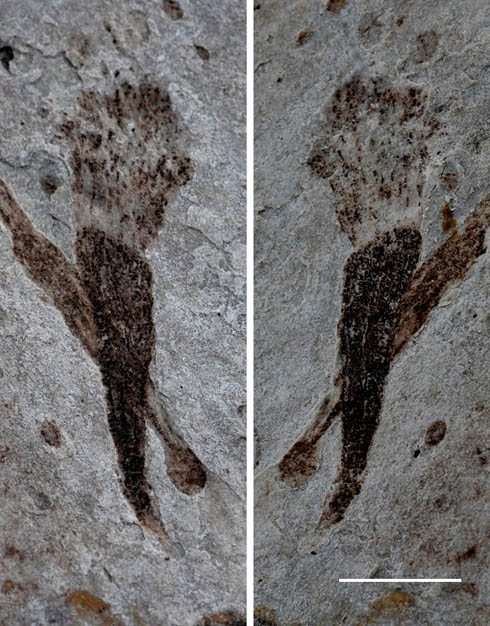 The fossils suggest that structural diversification of macroscopic eukaryotes–the earliest versions of organisms with complex cell structures–may have occurred only tens of millions of years after the Snowball Earth event that ended 635 million years ago.

Snowball Earth proposes that the Earth’s surface became almost, or completely, frozen at least once during the planet’s history.

The presence of macroscopic eukaryotes in the highly organic-rich black shale suggests that, despite the overall oxygen-free conditions, brief oxygenation of the oceans did come and go, according to H. Richard Lane, program director in the National Science Foundation (NSF)’s Division of Earth Sciences, which funded the research.

“So there are two questions,” says Shuhai Xiao, a geobiologist at Virginia Tech. “Why did this community evolve when, and where, it did?

“It is clearly different in terms of the number of species compared to biota preserved in older rocks. There are more species here, and they are more complex and larger than what evolved before.” 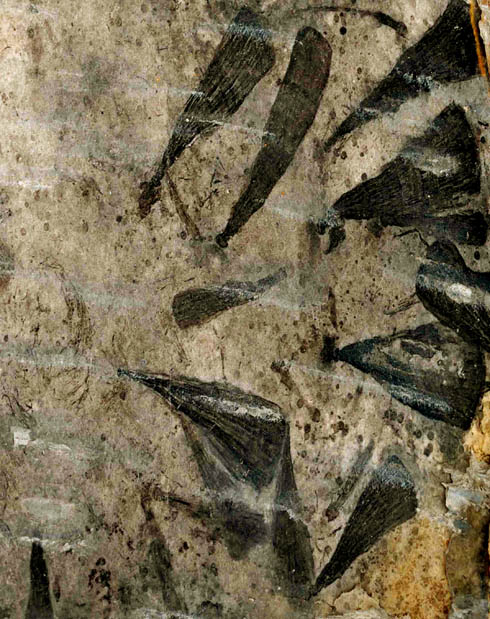 A cluster of fossils from the Lantian area, preserved and unearthed in very high densities. Image credit: Zhe Chen and Xunlai Yuan

The rocks were formed shortly after the largest ice age ever, says Xiao, when much of the global ocean was frozen.

By 635 million years ago, the snowball Earth event ended and the oceans were clear of ice. Perhaps, Xiao says, “that prepared the ground for the evolution of complex eukaryotes.”

The team examined the black shale rocks because, although they were laid down in less than optimal waters for oxygen-dependent organisms, “they are known to be able to preserve fossils very well,” says Shuhai.

“In most cases, dead organisms were washed in and preserved in black shales. In this case, we discovered fossils that were preserved in pristine condition–some seaweeds still rooted–where they had lived.”

The conclusion that the environment would have been poisonous is derived from geochemical data, “but the bedding surfaces where these fossils were found represent moments of geologic time during which oxygen was available and conditions were favorable,” says Xiao. 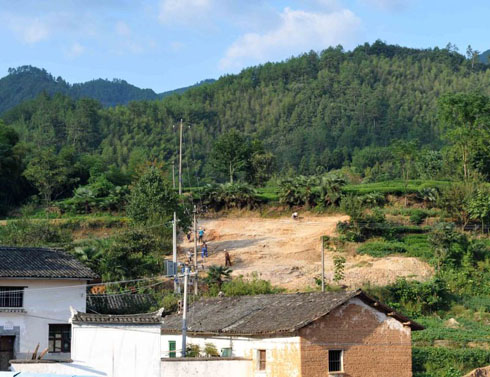 “They are very brief moments to a geologist, but long enough for the oxygen-demanding organisms to colonize the Lantian basin and capture the rare opportunities.”

The research team suggests that the Lantian basin was largely without oxygen, but was punctuated by brief oxic episodes that were populated by complex new life forms.

Those life forms were subsequently killed and preserved when the oxygen disappeared. 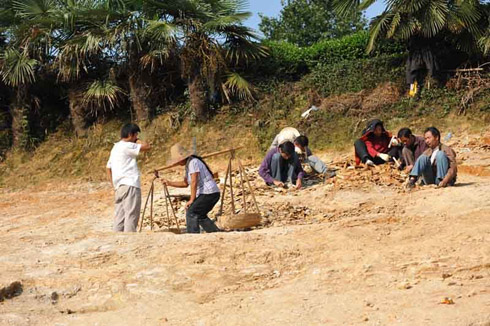 A treasure trove of fossils was found at this excavation site near Lantian village. Image credit: Zhe Chen and Xunlai Yuan

The rocks in the study region are deposited in layered beds. The nature of the rock changes subtly, and there are finer and finer layers that can be recognized within each bed.

“We will need to sample each layer to see whether there is any difference in oxygen contents between layers with fossils and those without,” says co-author Chuanming Zhou.

The research was also supported by Chinese Academy of Sciences, National Natural Science Foundation of China, Chinese Ministry of Science and Technology, NASA Exobiology and Evolutionary Biology Program, and a Guggenheim fellowship to Xiao.