By  analyzing the speed of seismic waves generated by earthquakes, scientists have shown that temperature differences deep within Earth’s mantle control the elevation and volcanic activity along mid-ocean ridges, the colossal mountain ranges that line the ocean floor. Recent research sheds new light on how temperature in the depths of the mantle influences the contours of the Earth’s crust.

PROVIDENCE, R.I. [Brown University] — Scientists have shown that temperature differences deep within Earth’s mantle control the elevation and volcanic activity along mid-ocean ridges, the colossal mountain ranges that line the ocean floor. The findings, published April 4 in the journal Science, shed new light on how temperature in the depths of the mantle influences the contours of the Earth’s crust.

Mid-ocean ridges form at the boundaries between tectonic plates, circling the globe like seams on a baseball. As the plates move apart, magma from deep within the Earth rises up to fill the void, creating fresh crust as it cools. The crust formed at these seams is thicker in some places than others, resulting in ridges with widely varying elevations. In some places, the peaks are submerged miles below the ocean surface. In other places — Iceland, for example — the ridge tops are exposed above the water’s surface.

“These variations in ridge depth require an explanation,” said Colleen Dalton, assistant professor of geological sciences at Brown and lead author of the new research. “Something is keeping them either sitting high or sitting low.”

That something, the study found, is the temperature of rocks deep below Earth’s surface. 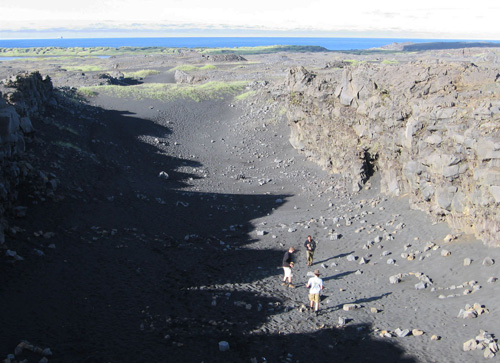 Temperature, not chemistry. What appears on the surface correlates with temperature deep in the Earth. Higher ridge elevation indicates a hotter mantle — as in Iceland, above, which also appears to sit atop a mantle plume, a vertical jet of hot rock originating from deep in the Earth. Image credit: Allison Gale/University of Wisconsin

By analyzing the speeds of seismic waves generated by earthquakes, the researchers show that mantle temperature along the ridges at depths extending below 400 kilometers varies by as much as 250 degrees Celsius. High points on the ridges tend to be associated with higher mantle temperatures, while low points are associated with a cooler mantle. The study also showed that volcanic hot spots along the ridge — volcanoes near Iceland as well as the islands of Ascension, Tristan da Cunha, and elsewhere — all sit above warm spots in Earth’s mantle.

“It is clear from our results that what’s being erupted at the ridges is controlled by temperature deep in the mantle,” Dalton said. “It resolves a long-standing controversy and has not been shown definitively before.”

A CAT scan of the Earth

The mid-ocean ridges provide geologists with a window to the interior of the Earth. The ridges form when mantle material melts, rises into the cracks between tectonic plates, and solidifies again. The characteristics of the ridges provide clues about the properties of the mantle below.

For example, a higher ridge elevation suggests a thicker crust, which in turn suggests that a larger volume of magma was erupted at the surface. This excess molten rock can be caused by very hot temperatures in the mantle. The problem is that hot mantle is not the only way to produce excess magma. The chemical composition of the rocks in Earth’s mantle also controls how much melt is produced. For certain rock compositions, it is possible to generate large volumes of molten rock under cooler conditions. For many decades it has not been clear whether mid-ocean ridge elevations are caused by variations in the temperature of the mantle or variations in the rock composition of the mantle. 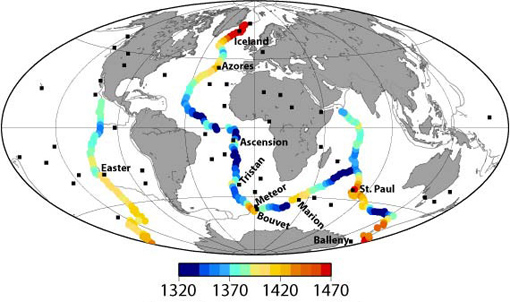 Potential temperatures (°C). After an earthquake, seismic waves propagate faster in cooler rock and slower in hotter rock. Observing the speed of seismic waves allows scientists to measure temperatures deep inside the earth and along mid-ocean ridges, above. Image credit: Brown University

To distinguish between these two possibilities, Dalton and her colleagues introduced two additional data sets. One was the chemistry of basalts, the rock that forms from solidification of magma at the mid-ocean ridge. The chemical composition of basalts differs depending upon the temperature and composition of the mantle material from which they’re derived. The authors analyzed the chemistry of nearly 17,000 basalts formed along mid-ocean ridges around the globe.

The other data set was seismic wave tomography. During earthquakes, seismic waves are sent pulsing through the rocks in the crust and mantle. By measuring the velocity of those waves, scientists can gather data about the characteristics of the rocks through which they traveled. “It’s like performing a CAT scan of the inside of the Earth,” Dalton said.

Seismic wave speeds are especially sensitive to the temperature of rocks. In general, waves propagate more quickly in cooler rocks and more slowly in hotter rocks.

Dalton and her colleagues combined the seismic data from hundreds of earthquakes with data on elevation and rock chemistry from the ridges. Correlations among the three data sets revealed that temperature deep in the mantle varied between around 1,300 and 1,550 degrees Celsius underneath about 61,000 kilometers of ridge terrain. “It turned out,” said Dalton, “that seismic tomography was the smoking gun. The only plausible explanation for the seismic wave speeds is a very large temperature range.”

The study showed that as ridge elevation falls, so does mantle temperature. The coolest point beneath the ridges was found near the lowest point, an area of very deep and rugged seafloor known as the Australian-Antarctic discordance in the Indian Ocean. The hottest spot was near Iceland, which is also the ridges’ highest elevation point.

Iceland is also where scientists have long debated whether a mantle plume — a vertical jet of hot rock originating from deep in the Earth — intersects the mid-ocean ridge. This study provides strong support for a mantle plume located beneath Iceland. In fact, this study showed that all regions with above-average temperature are located near volcanic hot spots, which points to mantle plumes as the culprit for the excess volume of magma in these areas.

Despite being made of solid rock, Earth’s mantle doesn’t sit still. It undergoes convection, a slow churning of material from the depths of the Earth toward the surface and back again.

“We get consistent and coherent temperature measurements from the mantle from three independent datasets,” Dalton said. “All of them suggest that what we see at the surface is due to temperature, and that composition is only a secondary factor. What is surprising is that the data require the temperature variations to exist not only near the surface but also many hundreds of kilometers deep inside the Earth.”

The findings from this study will also be useful in future research using seismic waves, Dalton says. Because the temperature readings as indicated by seismology were backed up by the other datasets, they can be used to calibrate seismic readings for places where geochemical samples aren’t available. This makes it possible to estimate temperature deep in Earth’s mantle all over the globe.

That will help geologists gain a new insights into how processes deep within the Earth mold the ground beneath our feet.

Dalton’s coauthors were Charles Langmuir from Harvard University and Allison Gale from the University of Wisconsin–River Falls. The work was supported by the National Science Foundation (grants OCE-0752166 and OCE-0752281).