COLLEGE PARK, Md. – By reptile standards, alligators are positively chatty. They are the most vocal of the non-avian reptiles and are known to be able to pinpoint the source of sounds with accuracy. But it wasn’t clear exactly how they did it because they lack external auditory structures.

In a new study, an international team of biologists shows that the alligator’s ear is strongly directional because of large, air-filled channels connecting the two middle ears. This configuration is similar in birds, which have an interaural canal that increases directionality.

“Mammals usually have large moveable ears, but alligators do not, so they have solved the problems of sound localization a little differently. This may also be the solution used by the alligator’s dinosaur relatives,” said Hilary Bierman, a biology lecturer at the University of Maryland. 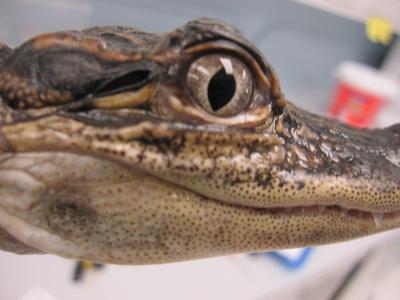 This is an alligator that participated in a University of Maryland study that found that the alligator’s ear is strongly directional because of large, air-filled channels connecting the two middle ears. This photo shows the earflap opening behind the alligator’s eye. Image credit: Hilary Bierman

The UMD biologists—along with researchers from the University of Massachusetts Lowell, University of Colorado Medical School and University of Southern Denmark—collected anatomical, biophysical and electrophysiological measurements of alligators to investigate the mechanisms alligators use to locate sounds.

“Different vertebrate lineages have evolved external and/or internal anatomical adaptations to enhance these auditory cues, such as pinnae and interaural canals,” said Bierman. 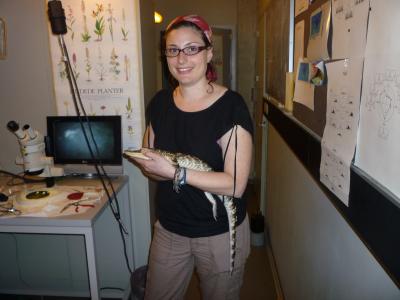 University of Maryland biology lecturer Hilary Bierman holds an alligator that she is prepping for vibrometry measurements in a laboratory at the University of Southern Denmark. Image credit: Jakob Christensen-Dalsgaard

First, the team tested how sound travelled around an alligator’s head to investigate whether the animal somehow channels sound, listening for tiny time and volume differences in the sound’s arrival at the two ears to help locate the origin. But the team found no evidence that the animal’s body alters sound transmission sufficiently for the animal to be able to detect the difference. And when the team measured alligators’ brainstem responses to sounds, they were too fast for the animals to sense these small time differences. 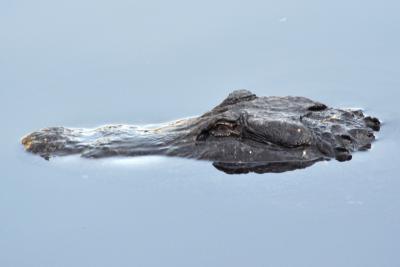 This is an alligator in the wild floating in a river. Researchers at the University of Maryland measured the acoustics of how alligators listen to sounds when they are in this position. Image credit: Daphne Soares

Sound reaches both sides of the eardrum—travelling externally to reach the outer side and through head structures to the internal side—to amplify the vibration at some frequencies when the head is aligned with the sound. This maximizes the pressure differences on the two sides of the eardrum, magnifying the time difference between the sound arriving at the ear drum via two different paths to allow the animal to pinpoint the source. And when the team looked at the eardrum’s vibration, they could see that it was amplified at certain frequencies, as they would expect if alligators use the pressure difference at the eardrum for orientation.

Assembling all of the evidence together, the researchers suggest that the reptiles rely on magnified time difference at the eardrum to locate noises. They also suspect that this is the mechanism that the archosaur ancestors of modern crocodilians and birds used to pinpoint sounds.