The United States prizes freedom above most other civic values, yet Bernard Harcourt believes the notion is widely misunderstood and inconsistently applied.

Freedom from government interference is a key tenet of the free market system that the United States champions, but Harcourt notes that Americans expect vigorous government action in imprisoning criminals. The result is a deep inconsistency, he argues, for even as the United States preaches freedom in the marketplace, it maintains the world’s highest incarceration rate.

Harcourt, the Julius Kreeger Professor of Law & Criminology and Professor and Chair of Political Science, explores this paradox in his new book, The Illusion of Free Markets: Punishment and the Myth of Natural Order (Harvard 2011). Harcourt says Americans’ divergent beliefs about incarceration and free markets are detrimental to the country, with a resulting 1 percent of its adult population now behind bars and a distorted faith in so–called “free markets.”

“The punitive society we now live in has been made possible by—not caused by, but made possible by—this belief that there is a categorical difference between the free market, where intervention is inappropriate, and the penal sphere, where it is necessary and legitimate,” writes Harcourt. “This way of thinking makes it easier both to resist government intervention in the marketplace, as well as to embrace the criminalization and punishment of any ‘disorder.’” 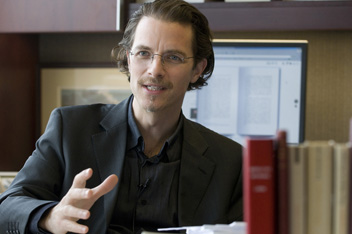 In his book, Harcourt traces the origins of the separation between economic exchange and the penal sphere back to a mid–18th–century group of French thinkers known as the “Physiocrats”—a name meaning “the rule of nature.” They argued that economic exchange needs no outside intervention and that economic transgressions should be severely punished.

In the centuries following, says Harcourt, the idea of a free economy paired with an exceptional penal sphere endured, influencing intellectuals from Jeremy Bentham to Friedrich Hayek and members of the Chicago School of Law and Economics.

However, while these ideas have proliferated in the public imagination, reality is far more complicated, Harcourt says. In fact, he argues that the notions of “natural order,” “free markets,” “regulation,” and “discipline” are mere conceptual tropes.

He uses as examples the hyper–regulated grain market of mid–18th century Paris and a bastion of our modern “free market” — the Chicago Board of Trade. Upon closer evaluation, he says, neither institution holds up to its labels. The Parisian grain market’s enforced regulations were actually very trivial with the most common violation being the failure to sweep one’s storefront, while the Chicago Board of Trade relies heavily on a complex web of rules about trading hours, price control, surveillance, and computer monitoring. Harcourt concludes, “there simply is no such thing as a non–regulated market—a market that operates without legal, social, and professional regulation.”

These labels not only are poor mirrors of reality; they also have had devastating effects in the political sphere, Harcourt says.

“It is not just that the categories are not useful. They have been affirmatively detrimental,” writes Harcourt. “The logic of neoliberal penality has facilitated our punishment practices by weakening any resistance to governmental initiatives in the penal domain because that is where the state may legitimately, competently, and effectively govern.”

Harcourt explains that crime had been seized as a political platform in the 1960s as a way to discredit the civil rights movement and as a wedge issue to dismantle the existing welfare programs. The result was a shift toward increased law–and–order measures while established welfare programs were scaled back.

By the 1980s, Ronald Reagan made the case to a sympathetic public that “states would be on more legitimate constitutional grounds and would more effectively ‘help the poor’ by scaling back public assistance programs and expanding the criminal justice system and law enforcement.”

Harcourt believes the U.S. public must educate itself against the illusory notion of an unregulated marketplace.

“This is only a first step,” he concludes. “But it is a necessary first step. It will not be possible to break the hold of our excessively punitive carceral state unless we first free ourselves from the very language of ‘free’ markets.”