*Technique suggests an avenue for creating new kinds of superconductivity*

COLLEGE PARK, Md. — Physicists at the Joint Quantum Institute (JQI), a collaboration of the University of Maryland and the National Institute of Standards and Technology (NIST), have for the first time caused a gas of atoms to exhibit an important quantum phenomenon known as spin-orbit coupling. Their technique opens new possibilities for studying and better understanding fundamental physics and has potential applications to quantum computing, next-generation “spintronics” devices and even “atomtronic” devices built from ultracold atoms.

In the researchers’ demonstration of spin-orbit coupling, two lasers allow an atom’s motion to flip it between a pair of energy states. The new work, published in Nature**, demonstrates this effect for the first time in bosons, which make up one of the two major classes of particles. The same technique could be applied to fermions, the other major class of particles, according to the researchers. The special properties of fermions would make them ideal for studying new kinds of interactions between two particles-for example those leading to novel “p-wave” superconductivity, which may enable a long-sought form of quantum computing known as topological quantum computation.

In an unexpected development, the team also discovered that the lasers modified how the atoms interacted with each other and caused atoms in one energy state to separate in space from atoms in the other energy state. 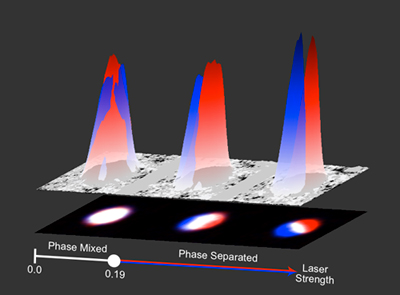 In an ultracold gas of nearly 200,000 rubidium-87 atoms (shown as the large humps) the atoms can occupy one of two energy levels (represented as red and blue); lasers then link together these levels as a function of the atoms' motion. At first atoms in the red and blue energy states occupy the same region (Phase Mixed), then at higher laser strengths, they separate into different regions (Phase Separated). Image credit: Ian Spielman, JQI/NIST

One of the most important phenomena in quantum physics, spin-orbit coupling describes the interplay that can occur between a particle’s internal properties and its external properties. In atoms, it usually describes interactions that only occur within an atom: how an electron’s orbit around an atom’s core (nucleus) affects the orientation of the electron’s internal bar-magnet-like “spin.” In semiconductor materials such as gallium arsenide, spin-orbit coupling is an interaction between an electron’s spin and its linear motion in a material.

“Spin-orbit coupling is often a bad thing,” said JQI’s Ian Spielman, senior author of the paper. “Researchers make ‘spintronic’ devices out of gallium arsenide, and if you’ve prepared a spin in some desired orientation, the last thing you’d want it to do is to flip to some other spin when it’s moving.” “But from the point of view of fundamental physics, spin-orbit coupling is really interesting,” he said. “It’s what drives these new kinds of materials called ‘topological insulators.'”

One of the hottest topics in physics right now, topological insulators are special materials in which location is everything: the ability of electrons to flow depends on where they are located within the material. Most regions of such a material are insulating, and electric current does not flow freely. But in a flat, two-dimensional topological insulator, current can flow freely along the edge in one direction for one type of spin, and the opposite direction for the opposite kind of spin. In 3-D topological insulators, electrons would flow freely on the surface but be inhibited inside the material. While researchers have been making higher and higher quality versions of this special class of material in solids, spin-orbit coupling in trapped ultracold gases of atoms could help realize topological insulators in their purest, most pristine form, as gases are free of impurity atoms and the other complexities of solid materials.

But the researchers were able to change that. In their experiment, researchers trapped and cooled a gas of about 200,000 rubidium-87 atoms down to 100 nanokelvins, 3 billion times colder than room temperature. The researchers selected a pair of energy states, analogous to the “spin-up” and “spin-down” states in an electron, from the available atomic energy levels. An atom could occupy either of these “pseudospin” states. Then researchers shined a pair of lasers on the atoms so as to change the relationship between the atom’s energy and its momentum (its mass times velocity), and therefore its motion. This created spin-orbit coupling in the atom: the moving atom flipped between its two “spin” states at a rate that depended upon its velocity. “This demonstrates that the idea of using laser light to create spin-orbit coupling in atoms works. This is all we expected to see,” Spielman said. “But something else really neat happened.”

They turned up the intensity of their lasers, and atoms of one spin state began to repel the atoms in the other spin state, causing them to separate. “We changed fundamentally how these atoms interacted with one another,” Spielman said. “We hadn’t anticipated that and got lucky.” The rubidium atoms in the researchers’ experiment were bosons, sociable particles that can all crowd into the same space even if they possess identical values in their properties including spin. But Spielman’s calculations show that they could also create this same effect in ultracold gases of fermions. Fermions, the more antisocial type of atoms, cannot occupy the same space when they are in an identical state. And compared to other methods for creating new interactions between fermions, the spin states would be easier to control and longer lived.

A spin-orbit-coupled Fermi gas could interact with itself because the lasers effectively split each atom into two distinct components, each with its own spin state, and two such atoms with different velocities could then interact and pair up with one other. This kind of pairing opens up possibilities, Spielman said, for studying novel forms of superconductivity, particularly “p-wave” superconductivity, in which two paired atoms have a quantum-mechanical phase that depends on their relative orientation. Such p-wave superconductors may enable a form of quantum computing known as topological quantum computation.

– By Ben Stein, National Institute of Standards and Technology (NIST)