Scientists are digging deep into the Earth’s surface collecting census data on the microbial denizens of the hardened rocks. What they’re finding is that, even miles deep and halfway across the globe, many of these communities are somehow quite similar.

The results, which were presented at the American Geophysical Union conference Dec. 8, suggest that these communities may be connected, said Matthew Schrenk, Michigan State University geomicrobiologist.

“Two years ago we had a scant idea about what microbes are present in subsurface rocks or what they eat,” he said. “We’re now getting this emerging picture not only of what sort of organisms are found in these systems but some consistency between sites globally – we’re seeing the same types of organisms everywhere we look.” 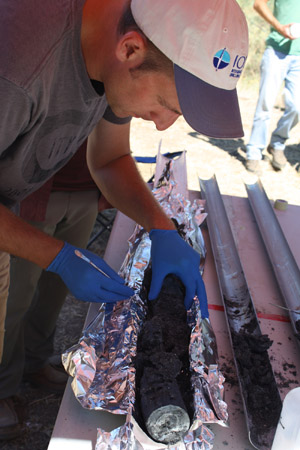 MSU scientist finds that, even miles deep and halfway across the globe, microbial communities are somehow quite similar. Image courtesy of MSU

Schrenk leads a team funded by the Alfred P. Sloan Foundation’s Deep Carbon Observatory studying samples from deep underground in California, Finland and from mine shafts in South Africa. The scientists also collect microbes from the deepest hydrothermal vents in the Caribbean Ocean.

“It’s easy to understand how birds or fish might be similar oceans apart,” Schrenk said. “But it challenges the imagination to think of nearly identical microbes 16,000 kilometers apart from each other in the cracks of hard rock at extreme depths, pressures and temperatures.”

Cataloging and exploring this region, a relatively unknown biome, could lead to breakthroughs in offsetting climate change, the discovery of new enzymes and processes that may be useful for biofuel and biotechnology research, he added.

For example, Schrenk’s future efforts will focus on unlocking answers to what carbon sources the microbes use, how they cope in such extreme conditions as well as how their enzymes evolved to function so deep underground.

“Integrating this region into existing models of global biogeochemistry and gaining better understanding into how deep rock-hosted organisms contribute or mitigate greenhouse gases could help us unlock puzzles surrounding modern-day Earth, ancient Earth and even other planets,” Schrenk said.

Collecting and comparing microbiological and geochemical data across continents is made possible through the DCO. The DCO has allowed scientists from across disciplines to better understand and describe these phenomena, he added.