Trees with smoother bark are better at repelling attacks by mountain pine beetles, which have difficulty gripping the slippery surface, according to a new study by the University of Colorado Boulder.

The findings, published online in the journal Functional Ecology, may help land managers make decisions about which trees to cull and which to keep in order to best protect forested properties against pine beetle infestation. 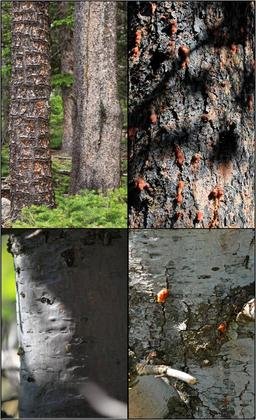 The current mountain pine beetle epidemic has spread across 3.4 million acres in Colorado since the outbreak was first detected in 1996. The tiny beetles, which are about the size of a grain of rice, bore into the pine bark. The trees fight back by exuding pitch, which pushes the beetles back out of the tree. Large-scale and continuous beetle attacks can kill the tree.

Doctoral student Scott Ferrenberg, who led the study, said he first began to suspect that bark texture might affect the survival of trees while he and Jeffry Mitton, a professor of ecology and evolutionary biology, were walking through a stand of high-elevation limber pines. They noticed that surface resin, a residue of fighting off a beetle invasion, was common only on patches of rough bark.

“We found trees that had both textures on the same stem, and when the tree was attacked, it was on the rough surfaces,” Ferrenberg said. “We thought the beetles were either choosing to avoid the smooth surface, or they just couldn’t hang onto it.”

To determine which was the case, the researchers tested how well the beetles could hold onto different bark textures. They placed each of 22 beetles on a rough patch of bark and on a smooth patch. They timed how long the beetle could stay on each surface before falling.

Twenty-one of the 22 beetles were able to cling to the rough bark until the test ended after five minutes. But all of the beetles fell from the smooth bark in less than a minute.

The results—especially combined with the findings of a second study also recently published by the research team—provide information that may be useful to land managers who are trying to keep public parks and other relatively small forested areas healthy.

In the second study, published online in the journal Oecologia, Ferrenberg, Mitton and Jeffrey Kane, of Humboldt State University in California, found that a second physical characteristic of a tree also helps predict how resistant the pine is to beetle infestation.

The number of resin ducts—which is related to the trees’ ability to pitch out the beetles—is easily counted by taking a small core of the tree.

“There are very practical applications,” Ferrenberg said. “These two traits are very easy to see on the tree.”

Because young trees tend to have smoother bark as well as more resin ducts, the research also suggests that land managers should consider cutting down some older trees when mitigating properties to resist beetles.

“This contradicts the approach that has been historically common for fire management,” Ferrenberg said. “The common approach for fire is to cut all the small trees. But if you want to defend a small amount of land against bark beetles, that may not be the best strategy.”

The two studies were funded by Boulder County Parks and Open Space, the Indian Peaks Wilderness Alliance and the John Marr Fund.