The land they’ve identified might surprise some because it’s right next to where the fuel is being used.

Dennis Pennington, an MSU Extension bioenergy educator, is working with a team to identify possibilities for producing cellulosic and oilseed biofuel crops in Michigan for a multiphase project titled “Freeways to Fuels.” The overall goal is to determine whether biofuel crops – crops used for renewable fuels like ethanol and biodiesel – can be produced on nontraditional land, such as highway rights of way, vacant urban land and airport property.

“When producing crops for biofuels, we don’t want to take away farmland that’s being used for food crops,” Pennington said. “So the question is, where else could we plant? Michigan has a lot of non-traditional land with poorer soils that might provide a location for biofuels crop production.” 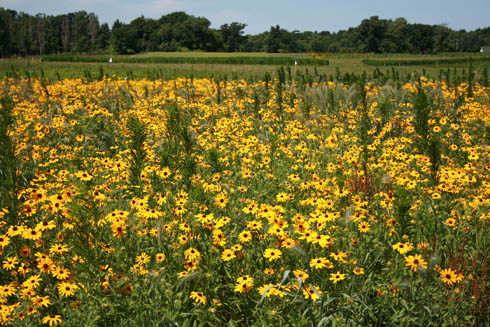 Biofuel crops like canola may be popping up on interstate medians and airport fields soon. Image credit: Michigan State University

Pennington and his team will grow switchgrass and three oilseed crops: oriental mustard, pennycress and canola. These are low-growing crops – meaning they won’t block people’s line of sight – and don’t attract wildlife, which are two important criteria for crops grown along highways and near airports, he added.

“Harvesting, processing and utilizing our own homegrown bioenergy feedstocks can help grow Michigan’s economy, preserve our environment and decrease our dependence on foreign oil,” she said. “It’s the right thing to do.”