To combat last year’s Deepwater Horizon oil spill, nearly 800,000 gallons of chemical dispersant were injected directly into the oil and gas flow coming out of the wellhead nearly one mile deep in the Gulf of Mexico.  Now, as scientists begin to assess how well the strategy worked at breaking up oil droplets, Woods Hole Oceanographic Institution (WHOI) chemist Elizabeth B. Kujawinski and her colleagues report that a major component of the dispersant itself was contained within an oil-gas-laden plume in the deep ocean and had still not degraded some three months after it was applied.

While the results suggest the dispersant did mingle with the oil and gas flowing from the mile-deep wellhead, they also raise questions about what impact the deep-water residue of oil and dispersant—which some say has its own toxic effects—might have had on environment and marine life in the Gulf.

“This study gives our colleagues the first environmental data on the fate of dispersants in the spill,” said Kujawinski, who led a team that also included scientists from UC Santa Barbara. “These data will form the basis of toxicity studies and modeling studies that can assess the efficacy and impact of the dispersants.

“We don’t know if the dispersant broke up the oil,” she added. “We found that it didn’t go away, and that was somewhat surprising.” 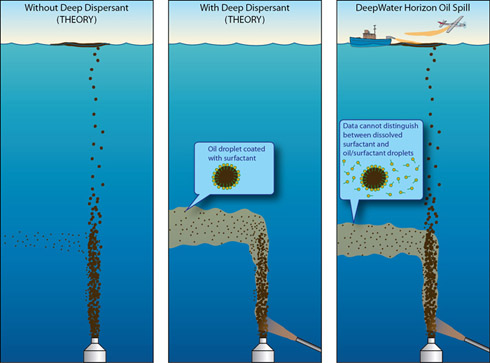 When oil and gas mixtures are ejected from a deep wellhead, liquid oil droplets of many different sizes form and rise toward the ocean surface. Because the smaller droplets become as dense as the surrounding water deep below the surface--in this case at about 1,100 meters—they are swept away laterally by prevailing ocean currents (left panel). When a dispersant is added at the depth of the wellhead, a component called a surfactant breaks up the oil into small droplets (middle panel). If the dispersant works perfectly, virtually all the liquid oil is in these “neutrally buoyant” droplets and is carried away before ever reaching the surface and the droplets become small enough to be consumed, or “biodegraded,” by bacteria. In the Deepwater Horizon spill (right panel), scientists found evidence that the dispersant mixed with the small droplets in the deep-water hydrocarbon plume but also discovered the oil/dispersant mix had not yet biodegraded several months after the spill. The study could not distinguish between oil droplets coated with surfactant (which would suggest the dispersant worked as planned) and surfactant floating freely on its own (suggesting the substance did not attach to the oil, as intended). Illustration by Jack Cook, Woods Hole Oceanographic Institution

The study, which appears online Jan. 26 in the American Chemical Society (ACS) journal Environmental Science &Technology, is the first peer-reviewed research to be published on the dispersant applied to the Gulf spill and the first data in general on deep application of a dispersant, according to ACS and Kujawinski. Some previous studies had indicated that dispersants applied to surface oil spills can help prevent surface slicks from endangering marshes and coastlines.

Kujawinski and her colleagues found one of the dispersant’s key components, called DOSS (dioctyl sodium sulfosuccinate), was present in May and June—in parts-per-billion concentrations–in the plume from the spill more than 3,000 feet deep. The plume carried its mixture of oil, natural gas and dispersant in a southwest direction, and DOSS was detected there at lower (parts-per-trillion) concentrations in September.

Using a new, highly sensitive chromatographic technique that she and WHOI colleague Melissa C. Kido Soule developed, Kujawinski reports those concentrations of DOSS indicate that little or no biodegradation of the dispersant substance had occurred. The deep-water levels suggested any decrease in the compound could be attributed to normal, predictable dilution. They found further evidence that the substance did not mix with the 1.4 million gallons of dispersant applied at the ocean surface and appeared to have become trapped in deepwater plumes of oil and natural gas reported previously by other WHOI scientists and members of this research team.  The team also found a striking relationship between DOSS levels and levels of methane, which further supports their assertion that DOSS became trapped in the subsurface. 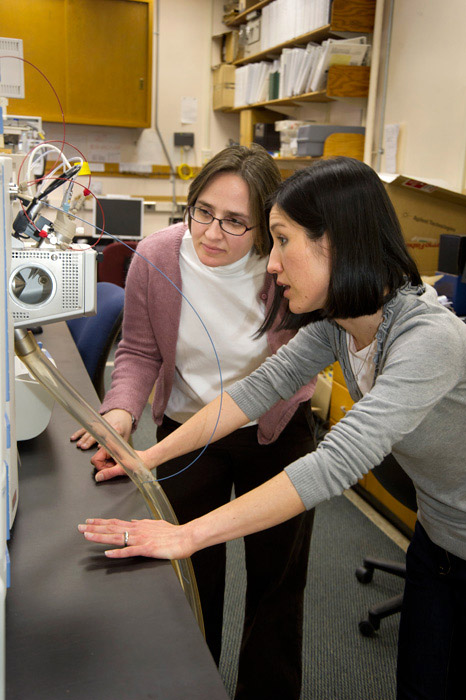 Though the study was not aimed at assessing the possible toxicity of the lingering mixture—Kujawinski said she would “be hard pressed to say it was toxic”—it nevertheless warrants toxicity studies into possible effects on corals and deep-water fish such as tuna, she said. The EPA and others have already begun or are planning such research, she added.

“The results indicate that an important component of the chemical dispersant injected into the oil in the deep ocean remained there, and resisted rapid biodegradation,” said Valentine, whose team collected the samples for Kujawinski’s laboratory analysis. “This knowledge will ultimately help us to understand the efficacy of the dispersant application, as well as the biological effects.” 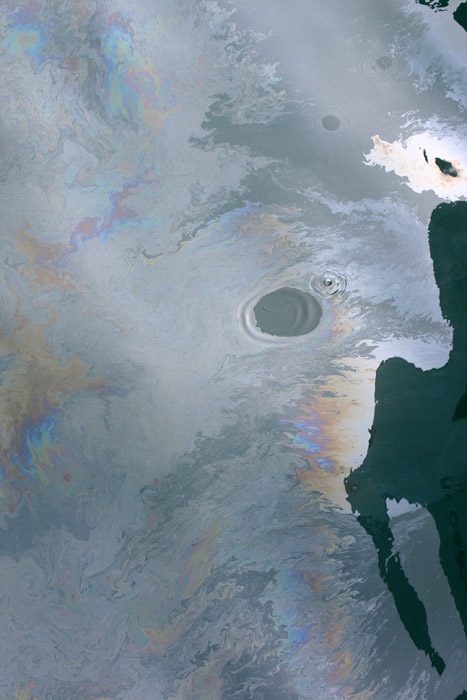 A fresh oil slick from the Deepwater Horizon spill, during June 2010. Note that one drop of detergent was added to the oil slick, forming the cleared circle. Image credit: David L. Valentine, University of California Santa Barbara

In Kujawinski’s technique, the target molecule was extracted from Gulf water samples with a cartridge that isolates the DOSS molecule. She and her colleagues then observed the molecule through a mass spectrometer, ultimately calculating its concentration levels in the oil and gas plume. This method is 1,000 times more sensitive than that used by the EPA and could be used to monitor this molecule for longer time periods over longer distances from the wellhead, she said.

“With this method, we were able to tell how much [dispersant] was there and where it went,” Kujawinski said. She and her colleagues detected DOSS up to around 200 miles from the wellhead two to three months after the deep-water injection took place, indicating the mixture was not biodegrading rapidly.

“Over 290,000 kg, or 640,000 pounds, of DOSS was injected into the deep ocean from April to July,” she said. “That’s a staggering amount, especially when you consider that this compound comprises only 10% of the total dispersant that was added.”

Kujawinski cautioned that “we can’t be alarmist” about the possible implications of the lingering dispersant. Concentrations considered “toxic” are at least 1,000 times greater than those observed by Kujawinski and her colleagues, she said. But because relatively little is known about the potential effects of this type of dispersant/hydrocarbon combination in the deep ocean, she added, “We need toxicity studies.”

“The decision to use chemical dispersants at the sea floor was a classic choice between bad and worse,” Valentine said. “And while we have provided needed insight into the fate and transport of the dispersant we still don’t know just how serious the threat is; the deep ocean is a sensitive ecosystem unaccustomed to chemical irruptions like this, and there is a lot we don’t understand about this cold, dark world.”