For the first time, the U.S. Food and Drug Administration is considering approving a drug that helps prevent someone from acquiring HIV. It’s called Truvada, and has been approved for use since 2004 to treat infected people.

Now it has been shown to protect healthy people who are exposed to HIV. The UW’s International Clinical Research Center, within the Department of Global Health, played a key role in examining the drug’s effectiveness for HIV prevention.

Researchers Connie Celum and Jared Baeten led a study, published this week in the New England Journal of Medicine, of pre-exposure prophylaxis among heterosexual couples in Kenya and Uganda. One partner had HIV (and was not yet eligible for HIV treatment) and the other partner did not have HIV. Uninfected partners were given either Truvada or Tenofovir (both antiretroviral drugs) or a placebo.

The study, called Partners PrEP, found that individuals at high risk for HIV had far fewer infections when they took a daily tablet of HIV medication. The FDA has announced that it will make a decision about approval for Truvada for HIV prevention by mid-September, to give sufficient time to review the strategies for monitoring PrEP. 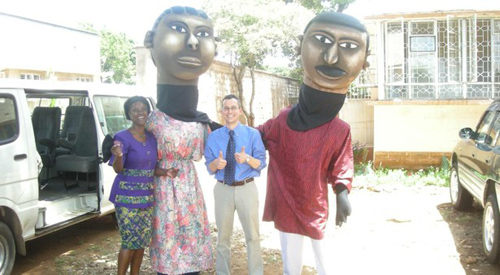 Celum, the center’s director and a professor of global health and medicine, talks about the impact of this ground-breaking research.

Q: What is the potential impact of Truvada in the fight against HIV?

We’ve been on a 30-year search for successful HIV prevention strategies. In addition to condoms, new strategies that recently have been shown to offer protection include male circumcision and treatment for those who are HIV-positive. Truvada as pre-exposure prophylaxis is a new tool for keeping people uninfected.

Q: What’s the extent of the HIV epidemic?

In the US, about 1.2 million people have HIV, with 50,000 new infections each year. That’s stayed stable for the last 15 years, which is part of the reason the FDA was convinced we needed new tools. Globally, there are more than 2 million infections each year. Ninety percent of the infected people live in Africa.

That’s U.S. pricing. It’s available generically overseas, and Gilead [the US drug maker] has discounted pricing in low and middle-income countries. The cost of the drug, either using generic products or discounted pricing provided to low-income countries, is about $100 a year. In the US, a key issue is going to be insurance coverage. It’s not cheap, but it’s cheaper than the cost of lifelong treatment for HIV if someone becomes HIV infected.

Q: Who would use the drug?

Men who have sex with men, discordant couples [where one partner has HIV and one doesn’t] and women who are at risk. If the FDA approves Truvada for HIV prevention, this decision will affect only the United States but it has broader repercussions. Many other countries, including in Africa, will see the FDA decision as a strong signal that the drug is safe and effective.

Q: How does Truvada work?

In some ways, it’s like malaria prophylaxis. You use it before you go into a high-prevalence setting, and if a mosquito with the malaria parasite bites you, you don’t get infected. The idea is that if you have the drug in your body, you prevent HIV infection from being established.

Q: Are there any side effects?

We did very intensive safety monitoring. Kidney problems were very rare. We found no difference in bone fractures. Lastly, we observed a low percentage with mild gastrointestinal symptoms in the first month, which went away by the second month. They were relatively mild and did not cause people to stop taking the drugs.

Q: The drug needs to be taken every day. Won’t that be difficult for some people?

We need to make it clear this isn’t something for everyone. People need to be at sufficient risk to benefit from it. So far, the data from the trials suggests that people either took it or they didn’t take it. There weren’t a lot of intermittent users. The risk of resistance is if people take this drug when they are in the process of becoming infected. The other concern would be if people took it sporadically or they weren’t tested frequently enough for HIV.

Q: What role has your research played in the FDA’s review?

The FDA asked Gilead to include our Partners PrEP study data as part of its application. Over the last six months we’ve worked hard to get the data analyzed and submitted. It was an important part of the package. Although it comes from populations outside the US, I believe it was an important demonstration of efficacy. It was a landmark study. This was the largest trial of pre-exposure prophylaxis and one of the largest HIV prevention trials ever. It required highly motivated couples and staff. The couples achieved higher levels of retention and adherence than has been observed in most studies. It takes a huge effort and focused team to accomplish that. Our trial had the highest efficacy (75 percent for Truvada and 67 percent for Tenofovir) of any of the studies. It was the only study that had large numbers of heterosexual men as well as women.

Q: How many people took part?

We are continuing the study through the end of this year, so we will have additional data since July 2011, when the placebo arm was offered PrEP. We’ll also be doing demonstration projects focusing on discordant couples in East Africa. We have funding at this point from the National Institutes of Health and the Gates Foundation.

Q: How close are we to an HIV vaccine?

The process has been a lot more complicated than we envisioned. We need to continue to use the tools we have while we continue to pursue a vaccine. Unfortunately, there’s not going to be a silver bullet on its own that is going to be a game changer. No strategy is 100 percent effective. If we can get really high coverage of testing, if we can get people into care, get people treated at earlier stages of HIV infection, and in Africa scale up male circumcision and offer pre-exposure prophylaxis for target populations, then I think the combination of these partially effective strategies can be a game changer while we continue the pursuit of an HIV vaccine.