Greg Landsberg, professor of physics at Brown, is the physics coordinator for the Compact Muon Solenoid (CMS) at CERN in Switzerland, part of a Brown team that includes professors David Cutts, Ultich Heintz, and Meenakshi Narain. The giant instrument’s primary mission is finding the Higgs boson, a particle whose existence would confirm the best guess physicists have made about why things have mass.

On July 4, Landsberg and his colleagues will reveal the latest results of their search. Anything could happen when Greg Landsberg and, including an announcement that the Higgs has been found or that it has been ruled out, sending theorists back to the whiteboard. Landsberg spoke by Skype with science news officer David Orenstein on June 26 as CERN physicists were preparing for their press conference.

What does it mean to be the physics coordinator?

The physics coordinator’s duty is to define the physics program of the experiment together with the spokesperson and to carry it out. I am responsible for the physics output of the experiment: papers, conference presentations, and results. I have daily involvement in all the searches including the Higgs. I follow them closely and participate in their review and their approval.

So far it has been fun. I started in January and the only thing I can complain about is lack of sleep lately as we are preparing all these results for the conference, not just with Higgs but many different results.

What is the importance of the Higgs boson and mechanism?

The Higgs boson and mechanism were proposed 48 years ago independently by three groups of people. One of these groups was an American group, which included Gerald Guralnik who is a professor at Brown. The idea was to try to explain the masses of various particles and also the phenomenon known as “electroweak symmetry breaking.” 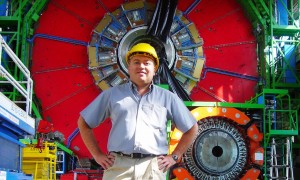 At the hub of the search for the Higgs boson. In December 2011, Greg Landsberg, professor of physics, began a two-year term as physics coordinator for the Compact Muon Solenoid, a detector at the Large Hadron Collider near Geneva. Image credit: Brown University

The big problem from the point of view of theory was to explain why photons are massless while the W’s and Z’s, which are basically the cousins of the photons, require this gigantic mass. If you want to create a massive particle you somehow need to choose why it’s this mass. The reason it’s happening is due to the Higgs mechanism.

The other thing we don’t really know is what’s the origin of the masses of various particles in the universe. The electron is very, very light. On the other hand are quarks like the top quark, which is the heaviest quark. It was discovered at Fermilab where we were part of the experiment and discovery in 1995. It is 330,000 times more massive than an electron. We don’t understand why some particles are very massive and some particles are very light. We believe the reason for that is also related to the Higgs field. The Higgs particle and the Higgs field permeate the entire universe. It acts a bit like a molasses. If you move through the medium, which is viscous like molasses, essentially your motion encounters some resistance. The molasses around you gives you inertia. We believe that different particles interact with different strengths with this Higgs field and that’s what gives them different masses.

What do we know going into July 4?

We hope to finish analyzing about the same amount of data as for the similar event in December where we showed the full results of the previous running of the accelerator in 2011. Now we’ve doubled our data. That’s a significant increase in our sensitivity. It gives us more statistical significance if the Higgs signal is there, or more statistical power to rule it out if its not there.

What we showed in December is that essentially we were able to rule out almost the entire allowed range of masses for the Higgs boson except for a narrow window somewhere between 110 to 130 times the mass of the proton. That’s the region in which we focused our search now.

Whether we see something or not remains to be seen. We are still finishing the analysis. Every day matters in this business. We’ll just have to wait and see what happens on July 4. I can tell you I haven’t seen the final results yet.

What does it mean if you have to rule it out?

It might mean that the Higgs boson is a more complicated thing. The standard model predicts minimum features of the Higgs boson that are absolutely necessary to explain particle masses and the masses of W and Z. This is not the only possibility. There are many theoretical models which predict something similar to the Higgs boson but with somewhat different properties. We need more time to test. The other thing that might happen is that maybe the whole Higgs mechanism is just the wrong concept and that something different is going on. This also has been suggested theoretically. Whatever we see or don’t see will help us to answer this question.

What if you do find it?

It would have major implications if we find exactly what was predicted by the standard model. We have been looking for this particle for 50 years and it would be nice to close this chapter. Even if we find the particle, with the current precision we won’t be able to prove uniquely that the particle is exactly the Higgs of the standard model. We might see that it has similar properties, but if you see some animal in the bushes you don’t know if it is a cat or a dog if you see it for a fleeting moment. If we see a first glimpse of the Higgs boson we would need much more time and much more data to really prove that the particle we observe is a Higgs boson.

How does the CMS detector work?

It is made like an onion in several layers. There are layers which are very close to the interaction point [where accelerated protons collide] which are very precise. As you go further out you have different detector types. By surrounding the interaction point with these many layers of different types of detectors you are trying to catch all types of particles which are produced in the collisions and measure them to high precision. This whole thing is submerged in a magnetic field. The magnetic field allows us to bend charged particles and this way we not only measure the charge but also the momentum of the particle.

Think of it as a 100-megapixel camera. You can go to Kmart and buy a 10-megapixel camera. It’s not a big deal these days, but your Kmart camera will take two or three frames a second. CMS is capable of taking 40 million frames a second. That’s what we need to detect particles that are produced as rarely as the Higgs boson. You need many many frames before you find the one that is interesting.

How is Brown involved?

Brown joined the CMS in 2004. We have been contributing to many aspects of CMS since then. Currently I am the physics coordinator of the CMS. My colleagues are holding other positions such as responsibility for various subdetectors and various physics groups. In a big collaboration like CMS, the actual physics analysis like Higgs search is really only the tip of the iceberg. You have to take into account all of the necessary preparatory work. This is a lot of effort from various people including taking data and making sure that detectors work properly, putting them into operation, being present in the control room to put the data on tape, validating the data. All of this cannot be separated from work on the analysis. As far as the actual analysis is concerned our students and faculty and postdocs are working within the analysis team.